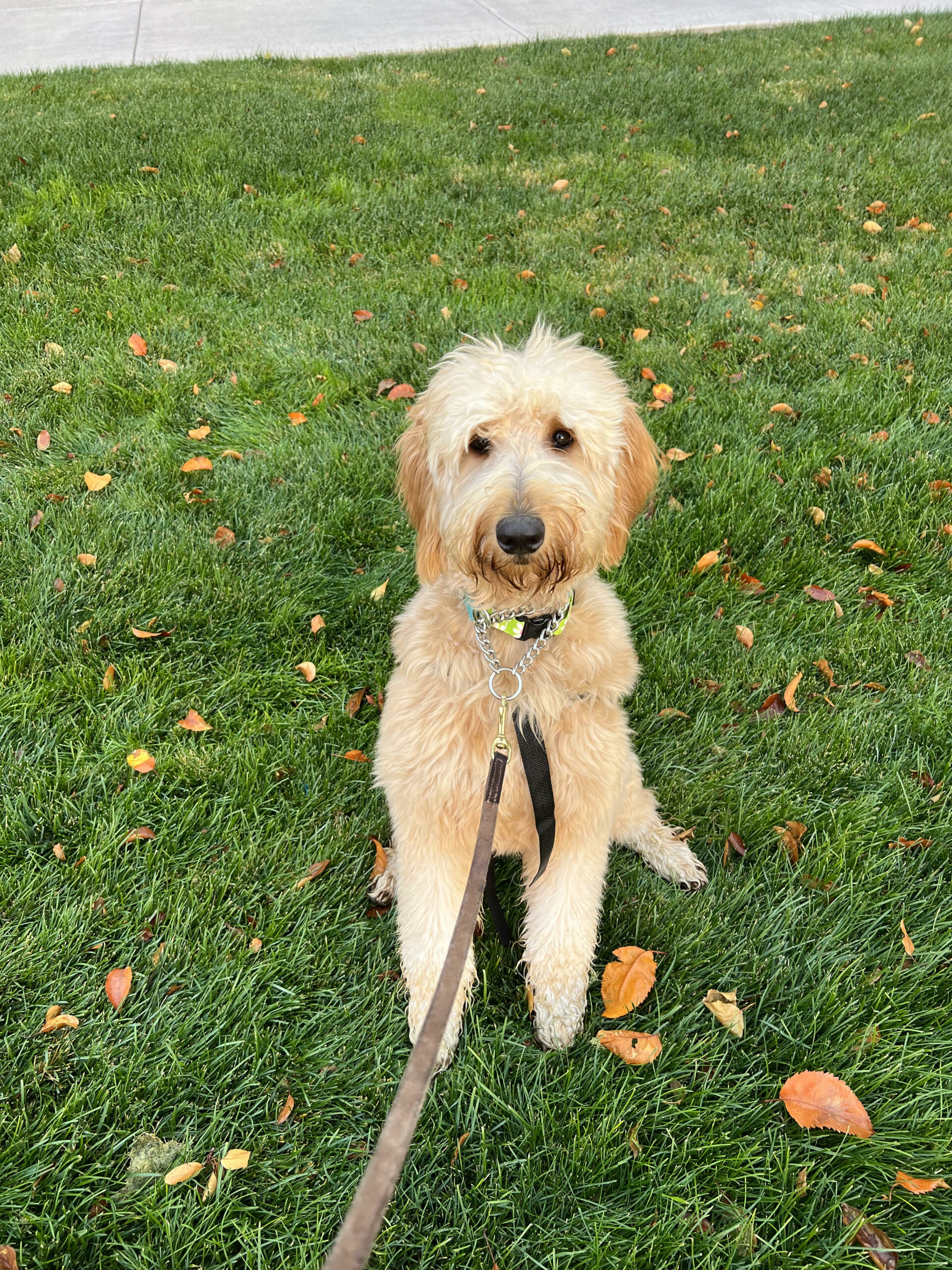 Aspen and the Advocate: How a woman and a dog are making victim’s lives easier at UNR

By Emerson DrewesAugust 18, 2022No Comments

This story was originally posted on April 3, 2022. Visit the Nevada Sagebrush Archive to see all of our past stories.

Lauren Reid is the current victim advocate at the university’s police department and previously worked as a detective for UNRPD before being the second to assume her current position.

The victim advocacy program started in 2018 when the police department was awarded a grant called “Transforming Victim Services”, given to them through the International Association of Chiefs of Police. The previous advocate, Sony, was relocated in June 2020 and Reid immediately took over the position.

In her position, Reid works to make legal proceedings less daunting and mental health resources accessible to victims of crime.

What makes Reid’s run as a victim advocate so special is the acquisition of Aspen, a one-year-old goldendoodle. Aspen was donated to the university through The charity 4E Healing Hearts donated Aspen to the university, with her first day being Nov. 2, 2021.

Aspen helps by being present during interviews and legal proceedings for the victims to stroke her hair and cuddle up next to her. Currently, Aspen is in the process of becoming a certified therapy and facility dog through the program Canine Good Citizen.

Reid was the one to propose and push for getting a therapy dog to help with retention of victims when Eric James became chief of police in July.

“I think there’s a lot of hesitation about ‘Should I call? Is this something worth, like, asking about?’” said Reid. “I think just knowing that she’s here and you might get to see her again, you might be more inclined to come back.”

Together, Aspen and Reid guide victims and provide them with emotional support while navigating the criminal justice system.

The Victim Advocate Program offers a myriad of resources and help for victims; Reid is the only victim advocate at this time. She is not a counselor or therapist, but will help in smoothly connecting those victims with the resources they need.

“It’s just a good jumping-off point to see what your options are,” said Reid. “So whether you do decide to file a police report, Title IX, Student Conduct … So it’s basically kind of like the resource connection.”

Another thing Reid wished to make clear is the only requirement is for a person to be a university student, staff or faculty member. Filing a police report or any other legal proceedings are not required to utilize the services.

The main resource Reid provides is accompaniment of victims through the criminal justice system. Reid is able to accompany victims of sexual assault to Sexual Assault Response Team exams at the hospital, sit with the victims during court hearings or be present during police interviews.

With most legal proceedings being online due to COVID-19, many victims can be present in court in Reid’s office with Aspen by their side and Reid behind the camera coaching them through.

For students who are not comfortable visiting the police department, Reid has an off-campus office whose location is known only to her.

“So the police officers don’t know where it is. Until I became the advocate, I did not know where it was … I would just tell you where it is, if that’s where someone wanted to meet if they weren’t comfortable coming here.”

Another important role of being the advocate is to minimize harm and trauma as victims retell their story to police officers, detectives or lawyers.

“We try to minimize how many times you have to talk about it. So coming to me, as the advocate, I learn your story. And then I can–hopefully–almost tell it on your behalf so that you don’t have to keep re-traumatizing yourself.”

The police department was awarded the same grant from the International Association of Police Chiefs in Sept. 2021, but moving forward they have committed to having Reid and Aspen in the budget permanently.

Members of the campus community can find Reid and Aspen playing ball in grassy areas or on their Instagram, @AspenandtheAdvocate.