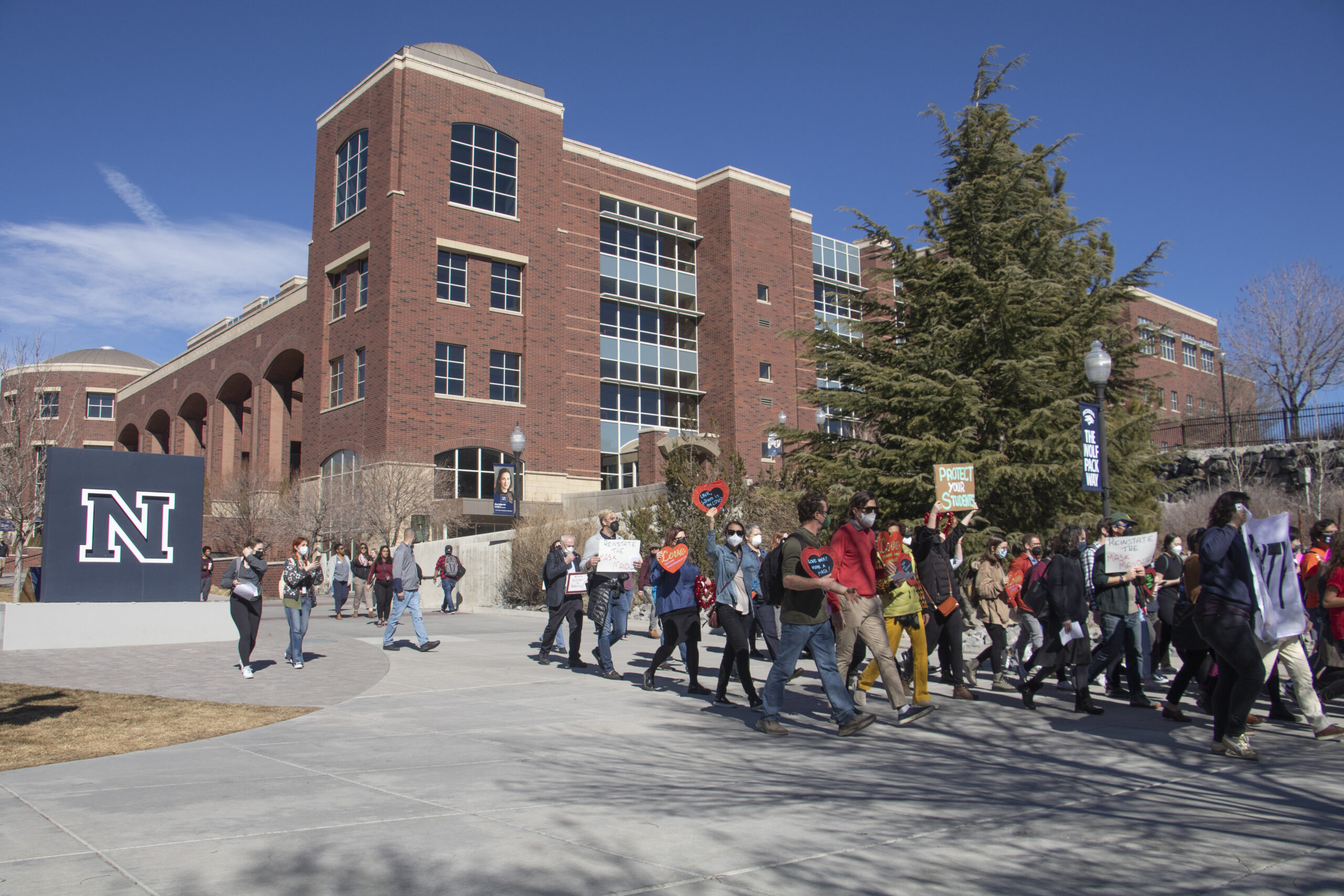 “I do not get paid enough to die for this university:” Campus community frustrated, protests UNR mask mandate repeal

By Jaedyn Young and Emerson DrewesAugust 18, 2022September 8th, 2022No Comments

Editor’s note: The story has been updated, since it’s original published date, to include comment from ASUN President, Austin Brown, and includes information on ASUN’s official stance on the events that took place. The story was originally published on Monday, Feb 14.

Members of the campus community protested the recent mask mandate repeal by walking out of their classes at the University of Nevada, Reno on Monday, Feb 14. Approximately 50 people were in attendance at the protest organized by the Nevada Graduate Student Workers.

The university and the Nevada System of Higher Education made the decision on Feb. 10 after Gov. Steve Sisolak got rid of the mask mandate across the state.

The NGSW created a petition urging the university to keep the mask mandate at the university. Within three days, the petition amassed over 1600 signatures, with over 400 of them being faculty and staff, the rest being from students.

Students and faculty walked out of classes at 11:45 a.m., and met at the Mathewson IG-T Knowledge Center lawn. Protesters walked from the lawn to the Jones Center, located on the south end of campus.

Those in attendance wore masks as they sang songs and yelled chants like, “Reinstate the Mask Mandate” and “Go Pack? Step Back! Our health is under attack!”, which could be heard across campus.

Some also carried signs which read, “UNR Breaks My Heart”, “Are you there Sandoval?”, “Reinstate the Mask Mandate.”

Members of the NGSW were the first to arrive and brought signs for protesters to carry. Student, faculty and staff members started to arrive around  11:45 a.m.

Emily Bird, a graduate student instructor and NGSW member, was one of the first to arrive on the KC lawn.

“We really want to give a platform for NSHE and our admins to hear and see us,” said Bird. “… We need this mask mandate to be instituted, at least until Omicron is down into the low to moderate range.”

Bird said they have lost ten people to COVID-19, which is what has made them so passionate about keeping the mask mandate in place.

Echoing Bird was Natalie Gonzalez, a fifth-year theater major. She said she hopes the university will reinstate the mandate, not just for herself, but for her friends. Gonzalez has friends who are considered high-risk and joined the protest as a way to advocate for them.

“I have friends who are immunocompromised,” said Gonzalez. “I know, like, this means a lot to them. I don’t want to put any of them in danger.”

Leif Aucoin, theater major at UNR who goes by it/its pronouns, was present in support of it’s mother who works at the Davidson Academy.

“Fortunately, Davidson Academy chose to keep their mask mandate, but she still has to interact with people that work on UNR campus,” said Leif.

Aucoin added the pandemic diminished the quality of it’s theater degree, but said wearing a mask was safer for everyone in the program.

“I’d rather be overly cautious and never do a single play on stage ever again without a mask,” Aucoin said.

According to the Center for Disease Control and Prevention’s COVID-19 dashboard, overall, there have been 77,592,982 cases of COVID-19 in the United States and 916,977 deaths.

Members and officials within the Associated Students of the University of Nevada were bystanders at the demonstration. The Nevada Sagebrush approached, but they all declined to comment on the matter.

ASUN President Austin Brown, in a written statement to The Nevada Sagebrush, urged members of the campus community to visit the Student Expression Website.

“Please visit the Student Expression Website as a resource when engaging with others,” said Brown. “Remember to stay kind and respectful to each other, regardless of other people’s stances. At the end of the day, we all run in the same Pack.”

Later the same day, the ASUN Instagram posted an announcement in support of Sandoval and Sisolak’s decision.

“The Associated Students of the University of Nevada are echoing the statements of the Governor and the University following the lifting of the mask mandate,” read the ASUN instagram post. “In these unprecedented times, we encourage students to practice the same respect and kindness as you have for the last two years.”

Additionally, the post encouraged students to do what makes them feel safe.

Professors were among the group, including Sarah Purdy, lecturer for the Gender, Race and Identity department.

Purdy said she is concerned for the health and safety of her students.

“I have very large classes, I have a class of 100 students, many of whom live with immunocompromised people,” said Purdy. “… Changing the rule now just doesn’t make any sense considering how easy it still is to spread COVID and get COVID with the transmission rates.”

Lydia Huerta, assistant professor in the GRI department carried a large flag reading “solidarity” throughout the duration of the protest. She said she marched alongside students to show them her support and ask for change.

“It seems to me like we’re going with politics and not science and that data that is there for a reason,” said Huerta.

Huerta said she hopes those who choose not to mask-up try to understand why some people have to mask-up.

“[I] would like [the university] to reinstate the mass mandate until the rates go down,” she said.  “I hope that people become aware that some of us need to wear masks for a reason and that they respect us and not harass us.”

Isabelle Favre, a French professor at the university, said there has to be awareness students and faculty need to have about COVID-19. She said being packed into a classroom with no masking mandate feels like they’re “breathing like sardines.”

David Fenimore held a sign that read “This donor has had it!!! No more dough (nut$).”

He is emeritus professor at UNR and said, as a donor, he is disappointed with the university’s decision and wished administration would actively care for student safety.

“I’m just so disappointed with how the administration has managed this pandemic,” Feinmore said.“It kind of broke my heart. I’m turning away,”

Fenimore added he would not donate anymore to the university.

When the marchers reached the south end of campus, testimonies that were left in the petitions free response section were read.

“I do not get paid enough to die for this university,” read one testimony.

Other testimonies stated individuals were high-risk or live with someone who is high-risk.

The demonstration ended around 12:50 p.m.

According to the NGSW, 54 percent of people who signed the petition indicated they were “interested in receiving information about further actions in protest of the mask requirement being lifted.”

“… [W]e have hundreds and hundreds of people willing to speak out for their safety, and for the safety of our campus community,” said NGSW in an email to The Nevada Sagebrush. “We will continue to take action and provide additional opportunities for activism and involvement, and ensure that UNR and NSHE admins not only listen to us, but hear us and our concerns.”

Scott Walquist, director of communications at UNR, said the university has always been a place where students can express their opinions.

“As an institution of higher learning, it is a responsibility within our educational mission to provide an environment where perspectives and experiences are shared safely, with respect and with a thorough understanding of points of view which sometimes may differ,” said Walquist in an email to The Nevada Sagebrush. “Today’s demonstration was an example where there was an exchange of ideas and constructive, peaceful action regarding public issues.”

The COVID-19 dashboard at the university, since the repeal, has not been updated since Feb 4. According to the most current figures there have been 775 positive cases of students, faculty and staff at the university.

The Nevada Sagebrush News Desk can be reached at edrewes@sagebrush.unr.edu or on Twitter @NevadaSagebrush.