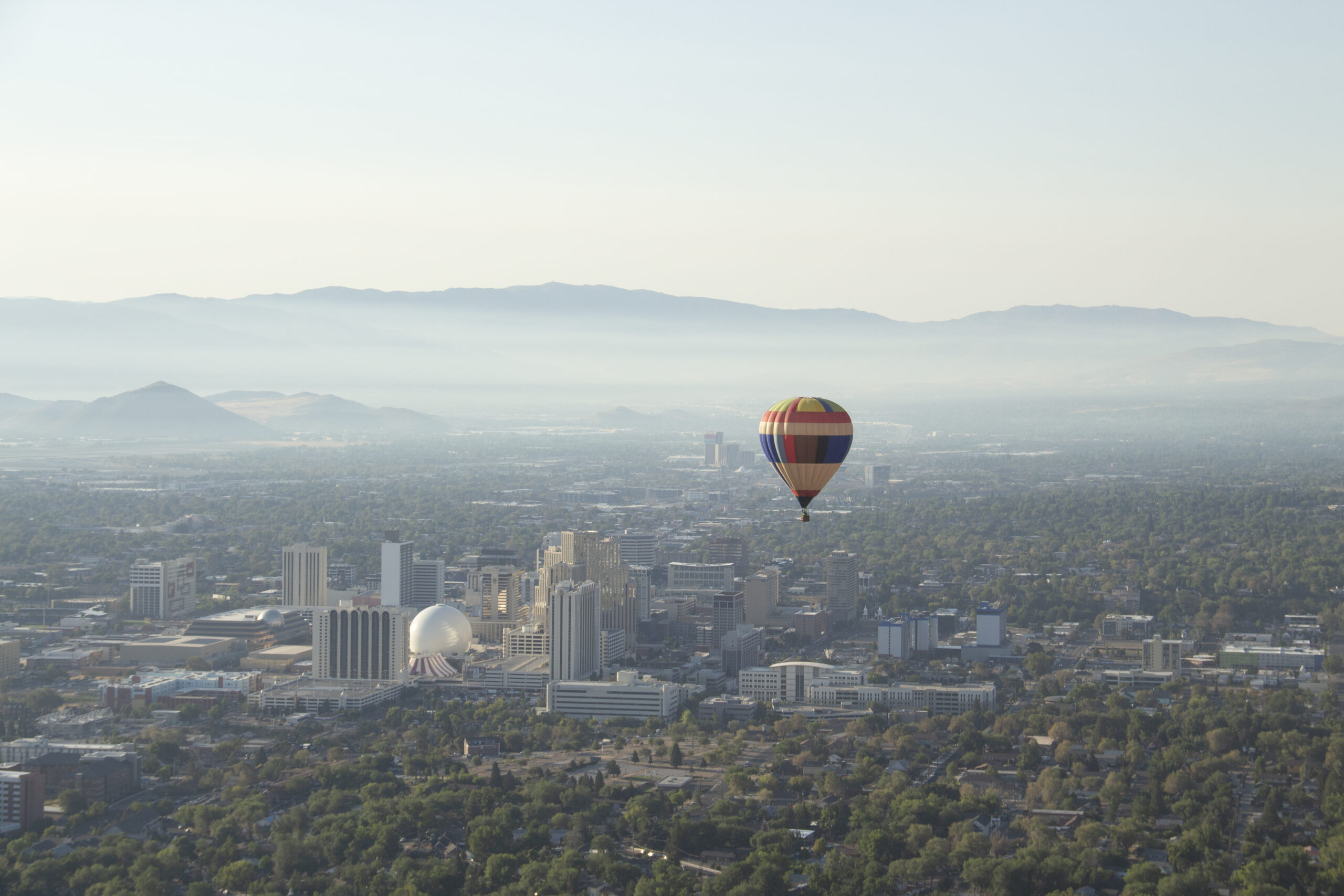 Another year of the Great Reno Balloon Race: Why is it worth going?

By Jaedyn YoungSeptember 27, 2022No Comments

Each year, for 41 years, the Great Reno Balloon Race is hosted at Rancho San Rafael Regional Park, where thousands of people come on Friday, Saturday and Sunday to watch an array of colorful air balloons cloud the Reno skies.

However, you’d think after seeing it once, people would get tired of the repetition and waking up around 4 a.m. to watch the show. So, why do people keep coming back?

The Sagebrush granted me the opportunity to ask.

Rachel Jackson, The Nevada Sagebrush photo editor, and I were given our second VIP access to ride in a hot air balloon on the event’s media day, Thursday, Sept. 8.

Kim Lynch, the pilot of our boat, is the owner of the Renown-represented air balloon that is usually tethered to the ground. On normal event days, Lynch takes kids from the Renown hospital on a small ride off the ground, giving them the opportunity to experience what it feels like to be in a hot air balloon for the first time.

However, this time, Lynch was actually going all the way in the air again — something she hasn’t done in quite a while, and she was bringing us with her.

One notable thing to remember about this pilot though, is she’s got 38 years under her belt, most of them with her husband, David Lynch by her side. The couple co-owns the “Reach For The Stars Hot Air Balloon Foundation” together.

The craziest part is how they started their air balloon adventure together.

On their first anniversary, Lynch surprised his wife with a magical hot air balloon ride to sweep them away. Little did they know, they’d have the opportunity to buy their own hot air balloon the following year. Soon came the founding of her company and then the recurrence of flying events, like the Great Reno Balloon Race, to keep Lynch occupied.

Since Lynch has done this a long time, the question that remained was why she gave her all into this foundation and why she kept coming back to Reno.

“The people. The people are the biggest reason to come back,” Lynch said when describing why this event is worth coming back to every year. “[And] the look on the kids’ faces … that’s the best part.”

How about for regular participants — what’s the appeal to an average UNR student to come every year, looking for something new?

“Every event is unique … and again today, you’ll [only] see half the balloons you’ll see the next couple of days,” said Ellie Lawlor, a volunteer who helps with the event.

This year, the GRBR took place on Sept. 9, 10 and 11, with the classic “Super Glow Show”, the “Dawn Patrol” routine and even a special 9/11 remembrance showing where the GRBR collaborated with the Reno Air Races.

However, along with the new events every year, one thing that many people always tend to look forward to is actually the different types of balloons in the sky. Even though there aren’t quite as many on media day, the following three days definitely makes up for it — and if you want to see the new balloons, you have to go every year.

This year, a couple of notable balloons included the Darth Vader balloon, the western armadillo balloon, the Tweety Bird balloon and the Sylvester character balloon. There were also, of course, some of the originals like the Tasmanian Devil and the Smokey Bear balloon, still out there that the attendees love to see.

Unfortunately, the sky was blanketed in smoke over the weekend, making the balloons harder to see and clouding the event with a wave of sadness due to the Mosquito fire.

Regardless, people still showed up early every morning to watch the Dawn Patrol and stayed well into the early afternoon to soak in the rainbow of balloons in the sky — even if they were clouded by smoke.

For those who didn’t get the chance to go this year, most Reno locals would recommend you try it next year. Even though the park doesn’t get great cell service and it’s packed with people, you’ll still be amazed by the effect the balloons can have on you.

And definitely take a ride in a hot air balloon if you get the chance. You never know, you may just end up loving it like the Lynchs did.