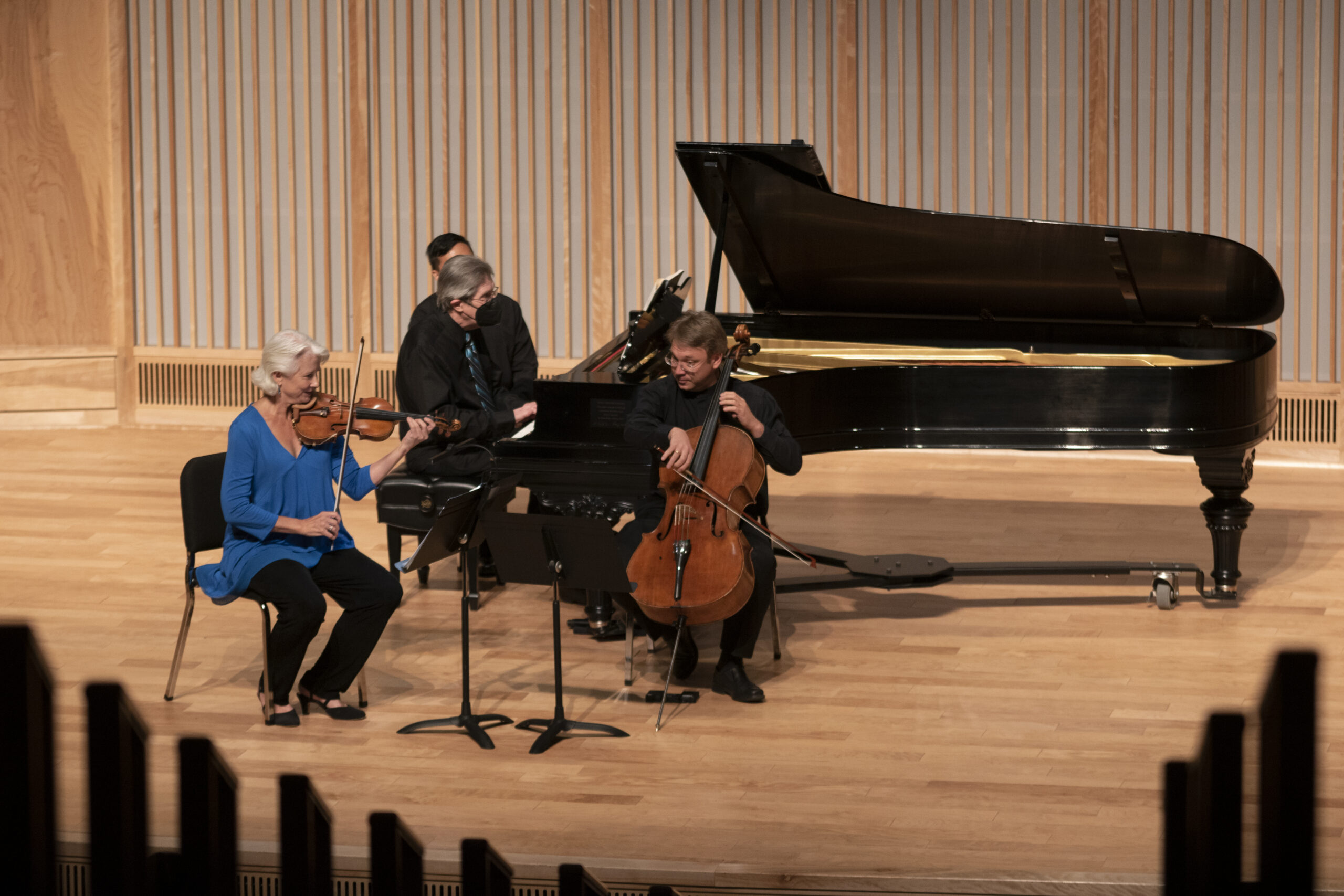 By Jaedyn YoungSeptember 29, 2022No Comments

On Sept. 11, the combination of Wolfgang Amadeus Mozart and Johannes Brahms performed by the Argenta Trio swayed the minds of all music lovers into a smooth frenzy of classical music.

The three members — James Winn on the piano, Stephanie Sant’Ambrogio on the violin and Dmitri Atapine on the cello — captured the room with their essence immediately upon taking stage.

However, the trio seemed to be looking a little less for the validation and a little more just for the satisfaction of playing a few classic pieces.

“You’ll hear us fooling around [with the music] a good deal,” Winn said. “Hope you enjoy it.”

The first movement, “Allegro”, was fast-paced, allowing the audience to see Winn’s fingers flying to the speed of the rhythm.

It was followed by the second movement “Thema & Variations.” Listening to just the first note of the movement sent chills up the spines of all the fans, followed by the unique wailing of the cello and the sorrowful sounds of Sant’Ambrogio’s violin.

In the final movement, “Allegretto”, portrayed the harmonization of the trio wonderfully as they all balanced each other out with different tones and allowed the audience to get lost in the sound.

The trio then took a brief pause to start the Piano Trio in B Major, Op. 8 by Brahms. There was no intermission since the trio wanted to maintain the social distance due to the pandemic. However, the three did promise to have a socially distant conversation with the audience after if they’d wanted to wait around.

Before the start, Atapine gave a few notes about Brahms collection, urging the audience to keep their eyes open about the transition between Brahms writing phases. Some parts of the movements were going to sound youthful and bright, while others were going to sound more mature and masterful, with a twinge of darkness added to it.

“Now for the meat and potatoes of the performance,” said Atapine, before they embarked on Brahms’s movements.

The first, “Allegro con brio”, was heartfelt and powerful. In each note, the audience could feel the dramatically rich notes transition through the soft piano whines.

“Scherzo. Allegro molto” was much more contradicting, starting off with a quiet tone before transferring into fast, angry, thundering tones. Each of the three musicians were feeling the music, violently being transformed into the sounds.

The transition into “Adagio” was an interesting one. Sant’Ambrogio faced her two counterparts, matching up their tones and maintaining that their instruments were in sync before they started the movement. From there, the harmonization made the passion of the movement even more feel-worthy.

Finally, Sant’Ambrogio, Winn and Atapine, gave everything they had into the fourth and final movement, “Allegro” to finish off the concert with a bang.

Throughout the movements, and in this one especially, the audience could feel the youthful music with naivety and light, change into a deep and emotional matureness that almost gives a soft darkness to finish Brahms’s piece off.

Watching the musicians fall into their music was quite iconic and allowed the audience to feel as connected to the music as they had.

The audience applauded, some sad to see the end, others excited for the future concerts of the university’s music department. The Argenta Trio definitely set a high precedent for performances to come.