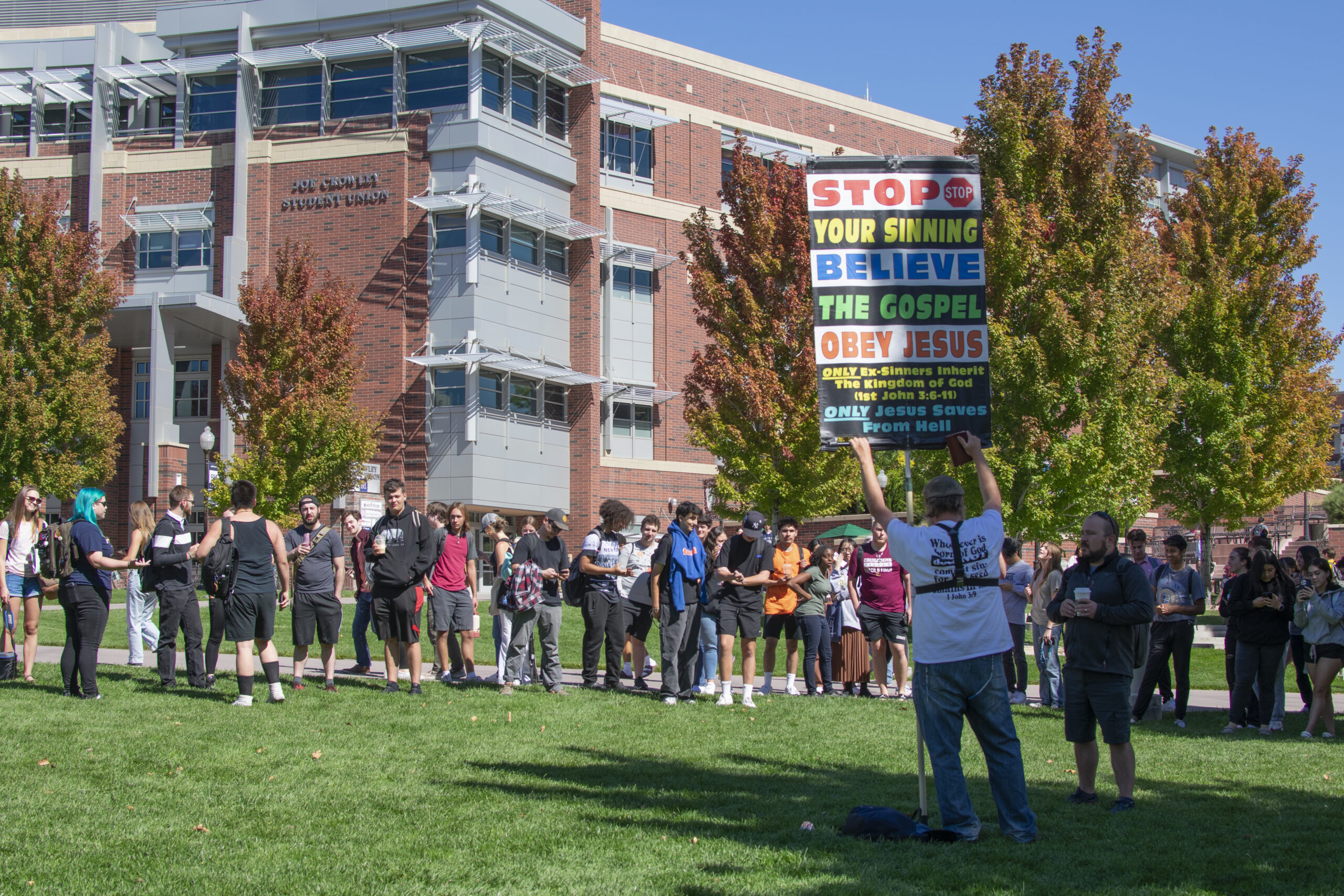 By Jaedyn Young, Lizette Ramirez and Emerson DrewesOctober 3, 2022No Comments 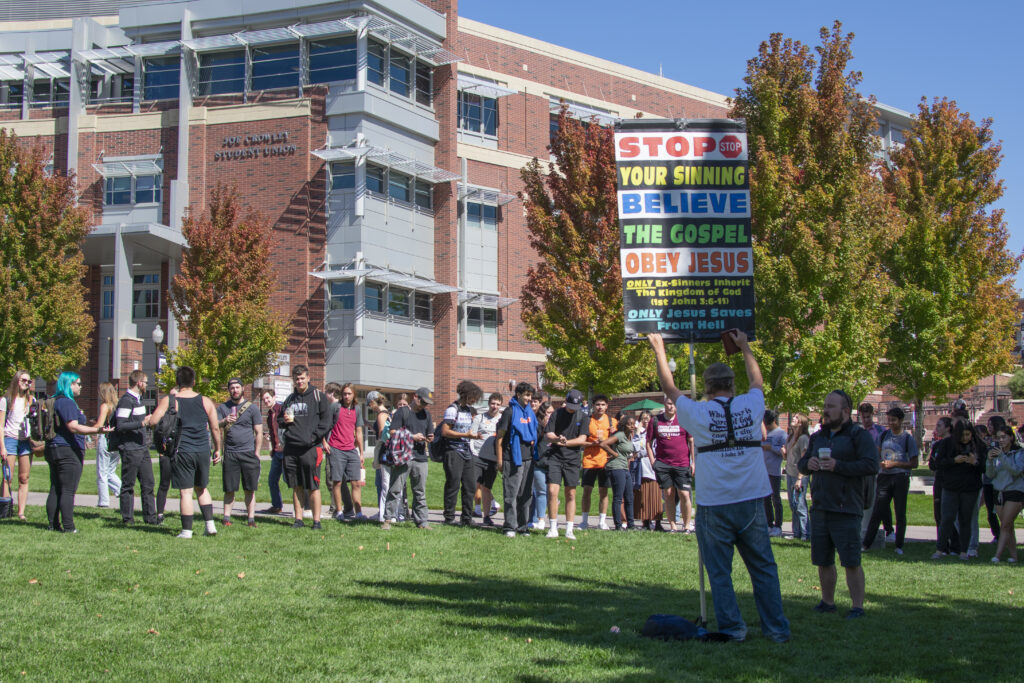 Daniel John Lee preaches his beliefs to students on the university campus. 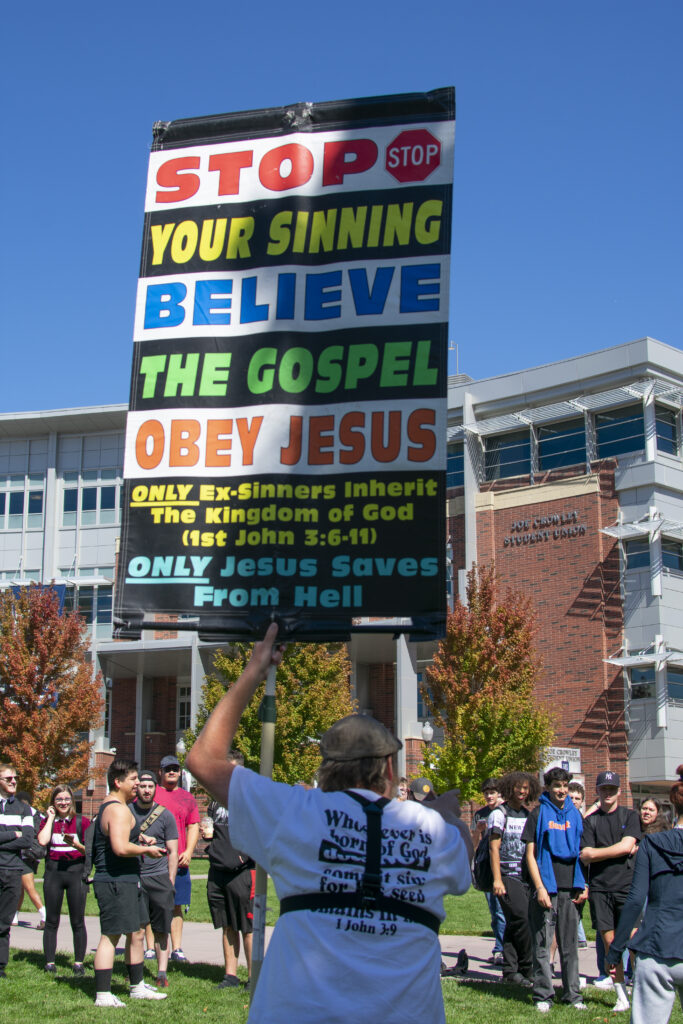 The preacher, who is not affiliated with any organization, Daniel John Lee, was spouting hateful speech to students during his demonstration on campus. 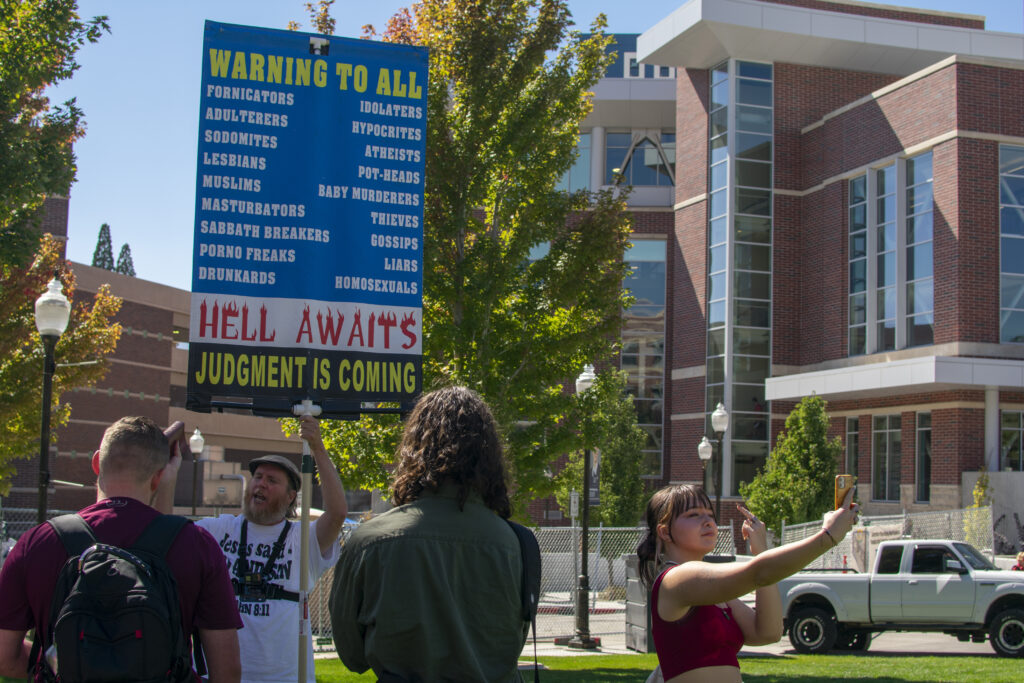 Preacher, Daniel John Lee, yells to students about his beliefs while they take pictures of him and argue with his speech.

Students at the University of Nevada, Reno crowded around a preacher as he screamed hateful sentiments during his demonstration on Oct. 3.

The preacher — Daniel John Lee — came to campus around noon to start his demonstration and within an hour students swarmed him and started fighting back at his beliefs.

During the entirety of his presentation, Lee wore a body camera to record student reactions.

Lee’s background and demonstrations across the country

Lee, who goes by the screen name of “dnajlion7,” is a traveling preacher from Juneau, Alaska.

Lee has a history of visiting college campuses, most recently visiting Boise State University on Sept. 30 where he recorded their reactions and posted it to his Rumble account.

When visiting SDSU, university police were called to the scene in an attempt to deal with the issue, according to The Collegian.

Now that he hits the University of Nevada, Reno, his goals are the same — to preach his gospel to the students and warn them to repent for their sins before they are doomed to hell.

Lee stated that the reason for coming to college campuses was because he has “a heart for students,” however he ultimately fought back at their statements, calling some “idiots” and many “sinners.”

Students did not stand for his speech, with one eventually throwing their sandwich at him.

“College students in general [are sinners]. But, other than the guy throwing the sandwich at me, you guys have actually been pretty civil,” Lee said. “I mean at Boise State I actually had a lesbian who lunged at me with a taser. So that was pretty bad.”

During his demonstrations he spouted many homophobic, islamophobic, transphobic and overall hateful speech to the campus. Lee went as far to say Allah, meaning “God” in arabic, is “the devil,” homosexuals are “sexual perverts” and their homosexuality is a choice.

Many students, like Christina Edwards, actively fought back against Lee’s statements.

“I feel like he is turning people away from God instead of bringing them to God. He’s not spreading the love of God, he’s spreading hate,” Edwards said.

There were also students like Edwards who were screaming back at Lee. Edwards was yelling “wh–e” at Lee after he admitted to cheating on one of his partners.

“I think when it turns into hate speech like this it should not be allowed,” Samantha Shapiro, another student said. “This is pure hate speech and it makes a lot of people uncomfortable.”

Other students felt this way as well. Ryan Conley and Kohana Gentolizo both expressed that Lee seems to be spreading hate rather than his faith.

“It seems very hateful and directed towards a lot of students on campus,” Conley explained.

Conley and Gentolizo stated they were there for entertainment. A few students were even taking their BeReals with Lee.

There were, however, no physical altercations against the preacher. During his presence on the campus, there were only verbal disputes and many gathered around him to protest his message.

This is not the first time preachers have done demonstrations on campus. Back in November 2021, two preachers — Shawn Holes and Keith Darrell — came to campus preaching their beliefs, while simultaneously spewing hateful speech to students on campus.

The demonstration ended around 3 p.m.

Lee has returned to the UNR campus on the morning of Oct. 4, holding the same sign and preaching the same ideals and beliefs. As of 11:04 a.m., students and passersby are not paying him any attention.

“Yesterday, there were so many students promoting their homosexuality,” said Lee in reference to yesterday’s demonstration.

Scott Walquist, director of communications at UNR, sent a statement to The Nevada Sagebrush on the morning of Oct. 4. The statement cited the University Administrative Manual section 5,303 on public forum saying “the University has always created an environment for raising challenging questions and the discussion of significant issues.”

“A function of free speech is to invite debate which can result in unrest, anger, and dissatisfaction. It is in this light that the University has traditionally understood the First Amendment’s application to our campus,” said Walquist in the statement. “Of all social institutions, universities should be the most friendly toward and protective of the right of free expression.”

Around 20 students have started to crowd around Lee.

This is a developing story. Check back for updates.

Jaedyn Young, Lizette Ramirez and Emerson Drewes can be reached via email at edrewes@sagebrush.unr.edu or via Twitter @NevadaSagebrush.