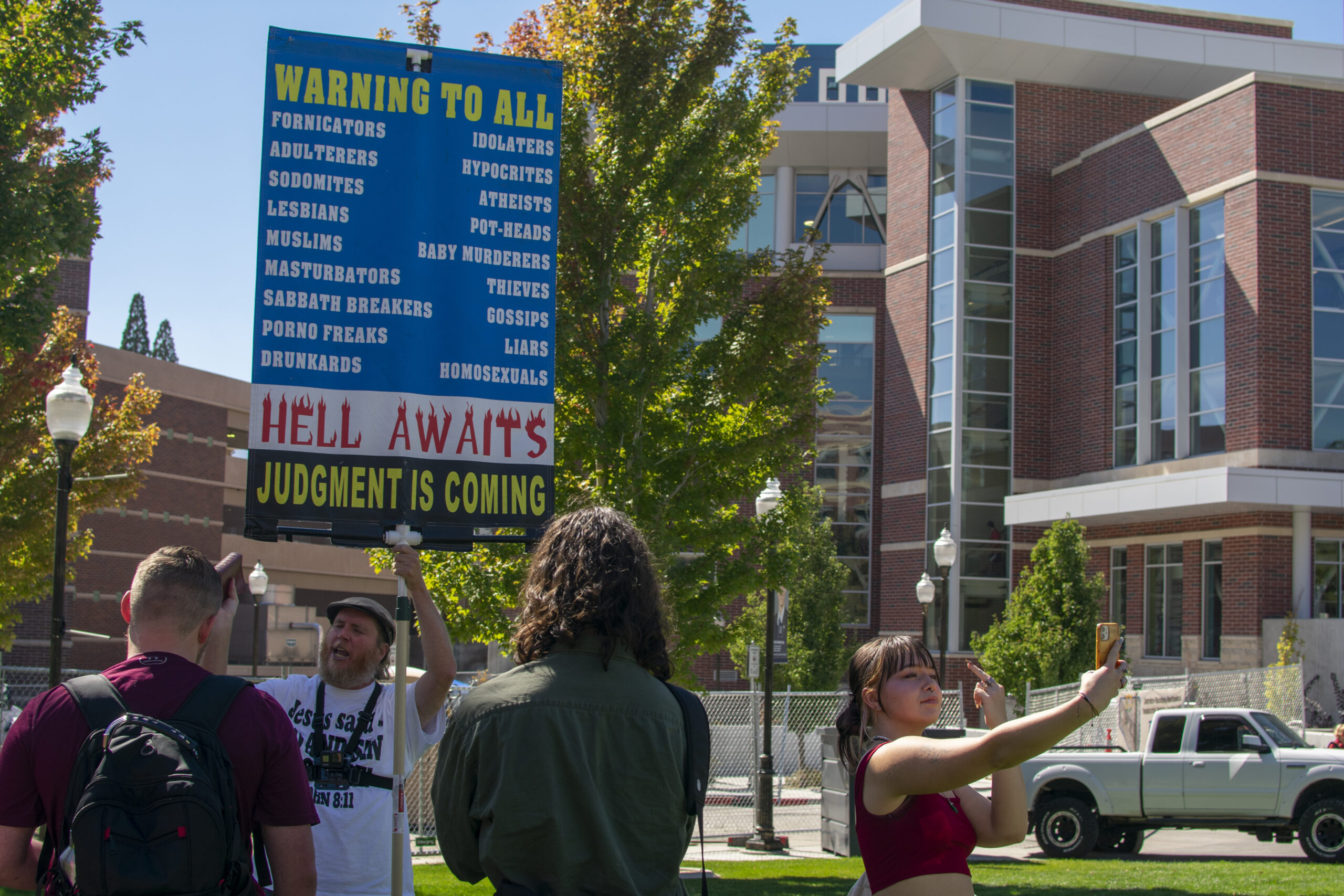 The University of Nevada, Reno campus has seen an influx of religious people advertise and preach their beliefs to students more often than usual this fall.

Students took notice when a preacher was on campus Oct. 3. Daniel Johnson Lee, a preacher not affiliated with any organization, came to campus holding a sign telling students they were going to hell. His demonstration outraged students and caused a group of students to surround him.

There have also been other accounts of religious organizations being on campus. The Catholic Newman Center hosted an event outside of their church between Peavine Hall and Argenta Hall on Oct. 12.

Additionally, Jehovah Witnesses have been standing outside of the Mathewson-IGT Knowledge Center.

“It’s a controversial subject because they [Jehovah Witnesses] aren’t really bothering anyone,” Shaffer said. “They kind of just stand there but it’s also like … what is their purpose? They’re not talking to anybody.”

Shaffer believes it isn’t right to push religion onto people. She doesn’t have a problem with it, but she does believe it gives prospective students a different view of the university.

“If you are a new student coming to campus or just visiting … and you see those people on campus, I think they give off the perception that we are a religious campus,” Shaffer expressed.

The Jehovah Witnesses are a regular fixture at the university and are often seen outside of the Knowledge Center. The Jehovah’s Witnesses hand out free Bible-based information that anyone can take. They want students to ask questions and engage in conversation.

It’s common for college students to go through personal struggles in life. This is the purpose of the Jehovah Witnesses coming to a university campus. Chris Houghton, a Jehovah’s Witness, says they are on campus to promote comfort when students are struggling with problems.

“If people walk by and they’re maybe dealing with anxiety, stress, or family problems, or anything, then they can maybe find comfort in the Bible,” Houghton explained.

Taylor Limbacher, resident assistant in Peavine Hall, revealed religion helped her get through hardships in life. Limbacher began her spiritual journey in 2016. It gave Limbacher a sense of community and something to believe in. Since being at the university, Limbacher hasn’t had the opportunity to go to church until recently.

“As soon as I started going back, I already feel happier and more in touch with Christianity,” Limbacher said.

Though Limbacher is religious, she has mixed feelings about the religious people coming onto campus.

“The preacher [Lee] can be really intrusive,” Limbacher started. “Even as someone who is religious. It’s very uncomfortable.”

Others felt this way about Lee. Shaffer felt similarly to Limbarcher and the Jehovah Witnesses.

“The preacher guy that was on campus … That’s just not okay. I think at some point that just turned into hate speech,” Shaffer explained.

Limbacher and Shaffer also brought up similar points from the missionaries on campus. Both students noticed missionaries following students.

“I’ve seen them [Jehovah Witnesses] try to go after some people sometimes … they try to follow them … I don’t think that should be allowed.” Shaffer said.

Limbacher has a friend who was followed by affiliates from the Catholic Newman Center two years ago on campus. The affiliates followed the friend back to her residence hall in an attempt to talk to her and for her to grab what they were handing out.

The Catholic Newman Center has also been holding events on campus. Jordan Dicus, an affiliate with the church, revealed there have been more students than usual attending service.

“We have seen an influx of people showing up to events, which is amazing because that hasn’t been that way in years past,” Dicus explained.

Dicus noted that students have been involved and happy the church on campus exists. Dicus believes the influx comes from the new priests, new bishops and word of mouth. Dicus noticed it’s also an open space for students to hang out, play pool and drink coffee.

The overall rise of religion on campus has been felt by the community. Whether it be the Jehovah’s Witnesses standing quietly near the Knowledge Center or preachers like Lee yelling at students.

Shaffer has a theory why there’s an influx of religious people this year.

“Many people believe that God is the answer, and many college students are ‘sinful’ as some think,” Shaffer explained. “So many religious groups think it’s their civic duty to ‘heal’ us as students from our sins.”

Lee said something similar when asked why he travels to universities. Lee believes that “College students in general [are sinners].”

The university is a public space for free speech. Religious organizations, and those like Lee, take advantage of this. Given the influx, the university could be seeing more of this on campus.

Jaedyn Young contributed to this story.

Lizette Ramirez can be reached via email at lizetteramirez@sagebrush.unr.edu or via Twitter @NevadaSagebrush.