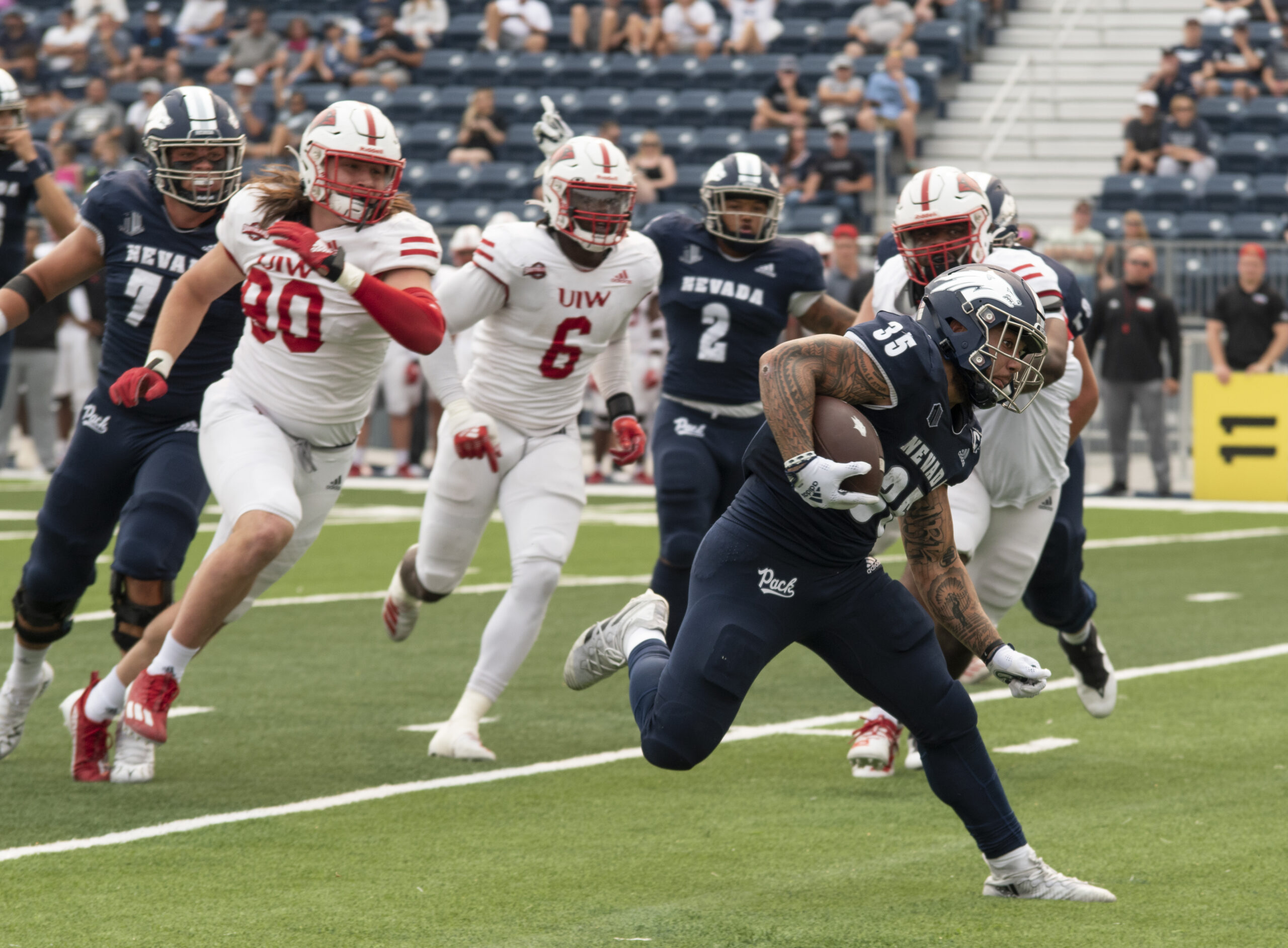 By Anthony MirandaOctober 24, 2022No Comments

After an exciting back-and-forth duel, Nevada came up short losing 55-41 to University of the Incarnate Word.

The Nevada Wolf Pack had a great showing on offense as they put up a staggering 41 points. Nate Cox, quarterback, was the starter this game. He had an impressive 302 yards and two touchdowns in the passing game and one rushing touchdown. Cox found success through the air as five different players had three receptions or more in the game.

BJ Casteel, wide receiver, was the top receiver in this game. Casteel racked up a solid stat line of five receptions, 85 yards and one touchdown. Dalevon Campbell, wide receiver, turned in a nice performance as he finished with three receptions for 64 yards.

This was an overall great performance from the Nevada offense that can give fans confidence for later in the season.

The Nevada defense did not have their best showing as they got some stops late in the game, but it was not enough to turn the tide of the game.

Tariq Mack, defensive back,  turned in a solid performance with seven total tackles and five solo tackles. The Nevada defense did not win the turnover battle as they have done in the first two games. They made stops late in the game but they simply could not contain the Incarnate Word offense.

Nevada quickly answered back with a 12-play drive that resulted in a touchdown. The Wolf Pack had a great mix of passing and rushing capped off by a 7-yard Cox touchdown pass to Casteel. The resilient Incarnate Word offense came roaring back with a touchdown of their own before the end of the first quarter.

Nevada started the second quarter with a 17-9 lead, but things began to go downhill from here for Nevada. The two teams traded punts until Incarnate Word used a long 77-yard pass to punch in a 1-yard touchdown run. Nevada turned the ball over on downs before Incarnate Word found the end zone again to take the lead 24-17 with 3:28 seconds left in the half. Nevada’s offense continued to struggle as they were forced to punt again.

Nevada was down 24-17 to begin the second half. However, things went from bad to worse as Incarnate Word strip-sacked Cox for a 59-yard touchdown return. This was a definitive play in the game that marked a huge uphill battle for Nevada.

Incarnate Word tried to put the nail in the coffin as they forced a Nevada punt and then scored on a seven-play drive. The Incarnate Word passing touchdown put them up 38-17 with 9:24 seconds in the third quarter. Nevada finally responded with a nice 10-play drive that ended in a 3-yard Cox touchdown run.

The Wolf Pack defense stepped up and forced a punt and the Nevada offense found the end zone again with a 26-yard touchdown pass from Cox to Taua. The Wolf Pack were down 38-31 with 19 seconds to go in the third quarter.

The momentum was on Nevada’s side as they began to mount an unlikely comeback in the fourth quarter. Incarnate Word tried to haunt the Nevada comeback when they kicked a 30-yard field goal to bump their lead to 41-31.

The Wolf Pack put together a nice drive capped off with a 40-yard Talton field goal. Nevada brought the game back to a one-score game as they were down 41-34 with 10:33 left in the fourth quarter.

The Nevada defense was unable to slow down the Incarnate Word offense as they scored on a ten-yard touchdown pass to increase their lead to 48-34. After two punts between the teams, the Wolf Pack found the end zone on a six-yard touchdown run from running back Lee. The score was 48-34 with 2:13 left in the game. Nevada needed more late-game heroics to pull off the successful comeback, and they got it with an amazing onside kick recovery.

There was a flag on the play and Nevada was unable to pull off a successful onside kick on their second attempt. Incarnate Word then scored on a 41-yard touchdown pass with 1:10 left in the game to shut the lights out on a Nevada comeback. Nevada was defeated by Incarnate Word 55-41.

This was a tough loss for the Nevada Wolf Pack as they fell to 2-1 to start the season. This was a very winnable game against an extremely talented FCS opponent, but Nevada could not get the job done.

Nevada can get back on track with a huge big-name win against a struggling Iowa team next week on Saturday, September 19.

Anthony Miranda can be reached at edrewes@sagebrush.unr.edu or on Twitter @NevadaSagebrush