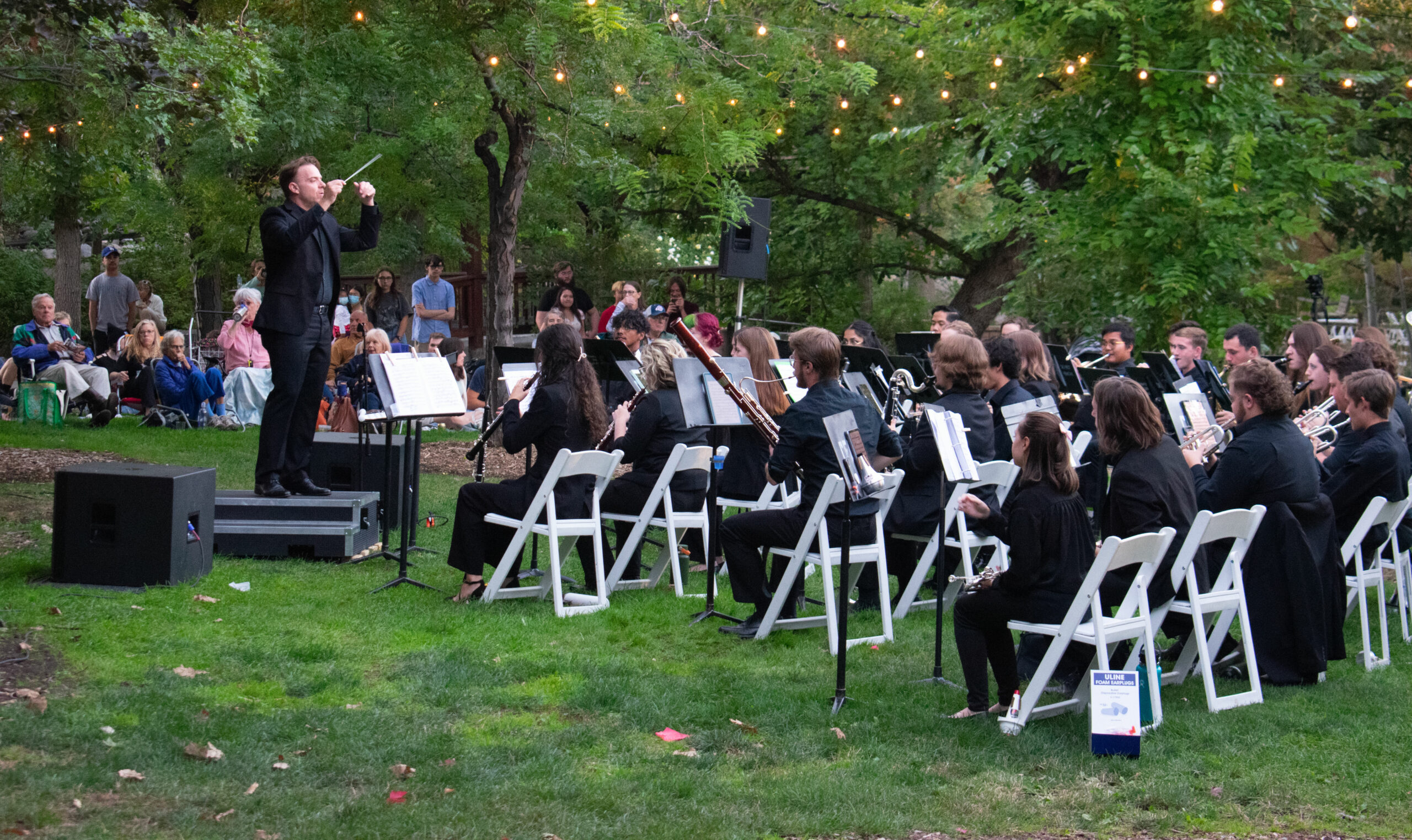 By Patrick McNabbNovember 4, 2022No Comments

On Sept. 30, the Nevada Wind Ensemble brought their instruments out during an evening sunset, at the Wilbur D. May Arboretum and Botanical Garden — the first stop on one of the many scenic paths in Rancho San Rafael Park.

As the audience walked through the gates and into the event, the string lights hung from the trees led to the rows of white chairs in the emptiest part of the arboretum. Despite the emptiness, there was still a tree growing in the middle of the percussion section, an added unique element to the setting the ensemble found themselves in.

Reed Chamberlin, the conductor, was introduced as the concert started.

Chamberlin raised his baton and the entire band took a deep breath before beginning John Philip Sousa’s “Sempre Fidelis.” This piece, originally composed in 1888, is often known as the Marine Corps official march. The description fits this piece excellently. With the snare drum keeping a consistent march-like pace, this is exactly what one would imagine a branch of the military such as the Marines would march to.

In the middle of the piece, the melody switched from the trumpets and reed instruments to the typically forgotten low brass.

With the tuba, euphonium and trombones leading the band, the vibrations from their deep tones could be felt through the ground. By the end of this piece, the audience got a true sense of what they were watching.

Chamberlin turned around to address his audience, most of whom were sitting on blankets or lawn chairs under the browning leaves of early fall. The arboretum was littered with amps and speakers, all which unfortunately served no use due to the technical difficulties with the microphones.

Chamberlin used his voice to project the title of the next piece, “Simple Gifts.” This piece was much slower than the first and utilized many unique musical attributes, such as a fugue.

To put it simply, a fugue is a musical phrase in which the melody — often played by high brass or woodwinds — is repeated throughout the piece by different sections of the band.

The melody echoed from the trumpets to the low brass, finishing the piece with a timpani roll from the percussion section.

The microphone issues persisted during the second short break of the concert where Chamberlin introduced the third piece, “Suite of Old American Dances,” by Robert Russel. This piece is broken up into five movements — all of which are from a different era of the early 1900s, with varying styles from marches to ragtime jazz.

As the piece began, it did not sound like traditional concert band music. With a more relaxed feel, the clarinets maintained the melody for most of the first movement, occasionally switching off with the french horns and trumpets. The movement came to a quick halt with a bright triangle roll and went directly into the second movement.

The second and third movement seemed to blend together, both having a ragtime jazz feel without the swing. A unique interaction between instruments came from the percussive woodblock and the soft, muted trumpets. These two movements ended with an iconic ending from the timpani, the “bum bom bum bom.”

Nearing the end of the piece, the jazz turned into a slow and controlled fourth movement, with an emphasis on the muted trumpet solo and a small solo coming from the oboe section.

Another march-like fifth movement came quickly after that, with energetic runs from the low brass all to end into a loud crescendo as the piece came to a close.

Chamberlin introduced his next piece through the phrase, “Just a little whimsy.” And “Belle of the Ball Waltz,” by Leroy Anderson, certainly delivered that feel.

Despite someone starting early, this 3/4 waltz had a solid pace backed by the interaction between the bass drum, snare drum and crash cymbals. As the piece was being played, the tempo began slowly rising, culminating to a large conclusion in the background of the flute and piccolo trill.

“The end will use some light pyrotechnics,” said Chamberlin to preface the last piece of the night, the “1812 overture”, by Pyotr Tchaikovsky.

The final piece of the concert was truly a show-stopper. A combination of all of the best parts of the first four pieces came together in the last piece to make an incredible end to the show.

This energetic piece left no phrase unfinished as the low reeds and brass played powerfully through each bar. With a mysterious feel at the beginning of the piece, this rounded out to a confident sound with the melody being kept by the high brass and clarinets.

As the music crescendoed to a close, loud booms echoed through the park as two miniature cannons were fired at the back of the band. The smoke from these cannons filled the air and left the audience stunned.

The concert closed with well-deserved applause from the crowd.

The band stood as Chamberlin took his bow and the audience began to pick up their chairs to leave.

As the leaves began to fall and the string lights glowed brighter, Chamberlin turned back around to address and inspire his ensemble.

Patrick McNabb can be reached at pmcnabb@nevada.unr.edu or on Twitter @patrickmcnabb_.