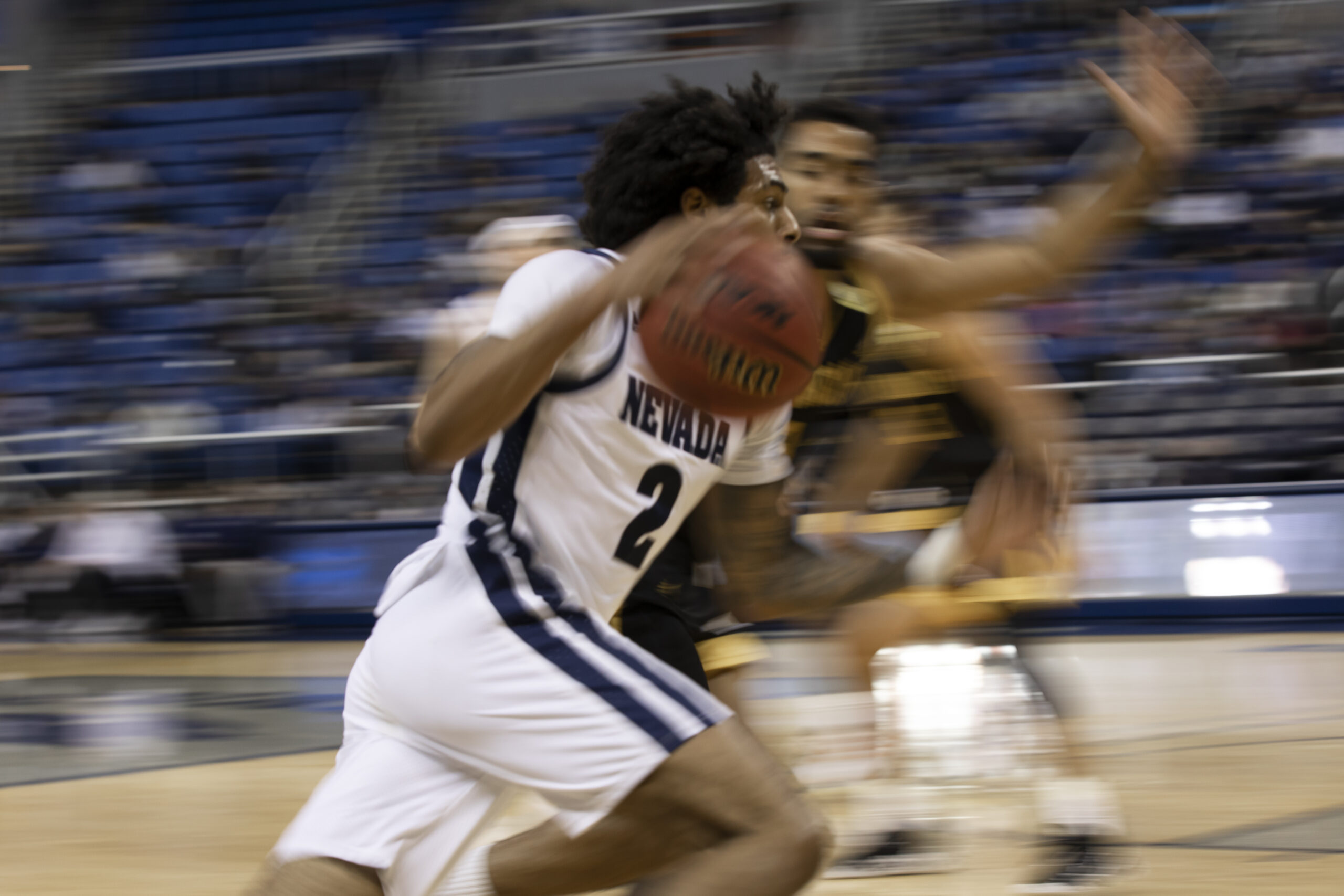 The National Collegiate Athletic Association Division I Basketball season starts on Nov. 7. For the University of Nevada, Reno, this is the most important sport alongside football. UNR sits within the Mountain West Conference and below are the predictions for this season out of all 11 teams.

Skinny: Air Force started the season 7-1 and began conference play at 3-4 with gritty wins over Utah State, UNLV and San Jose State. But then subsequently lost nine of their final 10 games by an average of 17.9 points. They now lose leading scorer AJ Walker to graduation, as well as Joseph Octave to the portal.

The bulk of Air Force’s offense is reliant on slowing the pace with efficient 3-point shooting. They’re not a good rebounding team -— for obvious reasons, given the Academy’s height-and-weight restrictions -— nor could they take care of the ball. This is also a young group and Air Force should expect more production from sophomores Ethan Taylor, Jake Heidbreder and Camden Vander Zwaag, among others.

Skinny: San Jose State was the worst team in the Mountain West last season, but still logged seven Division-I victories, the most since 2017. There’s room for moral victories with an 8-23 program, right?

They’re projected to finish second-to-last — ahead of only Air Force — and return its top four scorers, spearheaded by senior Omari Moore. He’s looking to build off a season where he averaged 13.2 points, 5.5 boards, 4.6 assists, 1.1 steals and 1.1 blocks per game.

Head coach Tim Miles brings in Temple transfer Sage Tolbert III and Fresno State transfer Robert Vaihola, neither of whom got much opportunity as their previous stops;

Tolbert is the only senior on this roster, which speaks to the youth within this program. They will need to improve offensively to have any chance to crack double-digit victories for the first time since 2016-17.

Skinny: Last season was a murky one, at best, for head coach Steve Alford.

He retained much of his 2020-21 core that finished third, and his squad was getting picked to finish third in the 2021-22 preseason poll. Though a combination of midseason injuries, a drop-off of offensive and defensive cohesion in addition to external Mountain West improvement led to a tumultuous 13-18 campaign; it marked the second time Alford’s career where he went below .500 over a full season as a Division-I head coach — the other being in 1999 to 2000 with Iowa.

We’ll see if internal improvement from Kenan Blackshear, Will Baker and Tre Coleman, among other returnees, along with fresh new blood can buoy Nevada to the top-half of the conference. Alford’s produced good seasons with more substantial roster turnover at Nevada — can he do it again? Only time will tell.

Skinny: The Aggies, one of the most experienced teams in the conference, must replace another key member in their frontcourt: Justin Bean.

Bean was Utah State’s second-straight All-Conference frontcourt member to graduate, the other being Neemias Queta. Bean and Brandon Horvath, who also graduated. Its new frontcourt will be shaped by Saint Joseph’s transfer Taylor Funk and Cal Baptist transfer Dan Akin, who both stand at 6-foot-9.

The strength of this group is the guard play led by Rylan Jones and Steven Ashworth, who helped set up their top returning scorer in Sean Bairstow, who could take a big leap in production after averaging 9.5 points last season.

Their experience will almost certainly help squeak out a few close games, but how far will Ryan Odom’s squad make it in year two? Time will tell

Skinny: It’s going to be difficult to replace Orlando Robinson, who was not just the focal point of their offense, but the anchor to defense. Southern Mississippi transfer Isaih Moore and Nebraska transfer Eduardo Moore will now carry that burden.

Luckily enough, the Bulldogs still retain guards Anthony Holland and Isaiah Hill, who combined for over 20 points a game in 2021-22. They will now need to manufacture most of Fresno State’s offense, though the biggest question will be how their frontcourt holds up against some of the conference’s best teams.

Collectively, Fresno State will also need to be more consistent in conference play if they have any postseason tournament aspirations — but with how deep the Mountain West is yet again, that’s going to be a tough task.

Skinny: UNLV was just one of five Mountain West programs last year who produced a top-100 offense and top-100 defense, per Ken Pom.

Though they will have to supplement for the production lost by Bryce Hamilton, Donovan WIlliams and Royce Hamm. It does welcome a half-dozen new transfers, led by Oklahoma transfer EJ Harkless, who averaged 10.0 points and 4.1 rebounds with the Sooners last season.

It’ll be interesting to see how these new pieces fit together, especially with point guard Jordan McCabe at the helm for the second consecutive season. All in all, this should be another rock solid UNLV squad with postseason potential.

Well, the Lobos certainly have that in Jaelen House and Jamal Mashburn Jr. House thrived as the primary initiator in an up-tempo role last season, posting 16.9 points, 3.6 rebounds, 4.5 assists and 2.2 steals per game. Mashburn topped the team in scoring at 18..2 points per game, exploding for 14 20-point games.

Neither were efficient from the floor, but did a good job getting to the free-throw line and converting. The Lobos now welcome in wing transfers Morris Udeze and Josiah Allick to pair with the aforementioned duo to form one of the more powerful offensive foursomes in the Mountain West. If New Mexico can defend better and be more efficient, they have the potential to be a top-5 Mountain West team.

Skinny: Like Wyoming, they will begin one of their star players at the season’s introduction—Isaiah Stevens will miss a good chunk to start with injury. The departures of David Roddy, Adam Thistlewood, Kendle Moore and Chandler Jacobs don’t help mitigate matters, either. The Rams will need bigger contributions from Jalen Lake, Baylor Hebb and John Tonje with Stevens out. They also brought in a quality transfer in Josiah Strong (Illinois State), who could contribute immediately, too.

Skinny: Leon Rose’s squads have consistently been one of the best in the Mountain West.

They’ve conjured 20 wins in eight of the last 10 seasons, and one of the seasons they didn’t was the COVID-shortened 2020-21 season, when they went 19-9. They were the conference champions — both in the regular season and tournament — last year, though they lost three key players from last year’s squad in Abu Kigab, Emmanuel Akot and Mladen Armus.

They still have the reigning Mountain West freshman of the year in Tyson Degenhart, second-leading scorer Marcus Shaver plus welcome Texas Tech wing transfer Chibuzo Agbo. Given Rice’s year-in, year-out consistency, this should be another top-five program for the Broncos.

The bad news is that Graham Ike, who was voted as the conference’s preseason player of the year award winner as arguably the conference’s top player, will miss the start of the season with a lower leg injury. The good news? Hunter Maldonado, another top Mountain West player, returns.

The Pokes also return three of their other top four scorers in Jeremiah Oden, Xavier DuSell and Brenden Wenzel, while welcoming in a very good trio of transfers in Ethan Anderson, Max Agbonkpolo, both from University of Southern California and Jake Kyman.

In short, Wyoming is expected to be a top mid-major team with plenty of two-way potential entering 2022-23.

Skinny: San Diego State is the projected No. 1 team in the Mountain West, and it’s understandable why.

Head coach Brian Dutcher thinks this team can reach the same heights as his 2020-21 team that finished 30-2. They return six of their top eight scorers, including top-scorer Matt Bradley and defensive anchor Nathan Mensah, who was the conference’s reigning defensive player of the year after rejecting 2.2 shots per game along with hauling in 6.9 rebounds per game.

They also brought in transfers Jaedon LeDee (TCU), Micah Parrish (Oakland) and Darrion Trammell (Seattle), one of the most sought out transfers across Division-I. Dutcher is expected to have another top-flight defensive unit with one of the conference’s top scorers and player of the year candidate in Bradley.

Matt Hanifan can be reached via email at mhanifan@sagebrush.unr.edu or via Twitter @NevadaSagebrush.