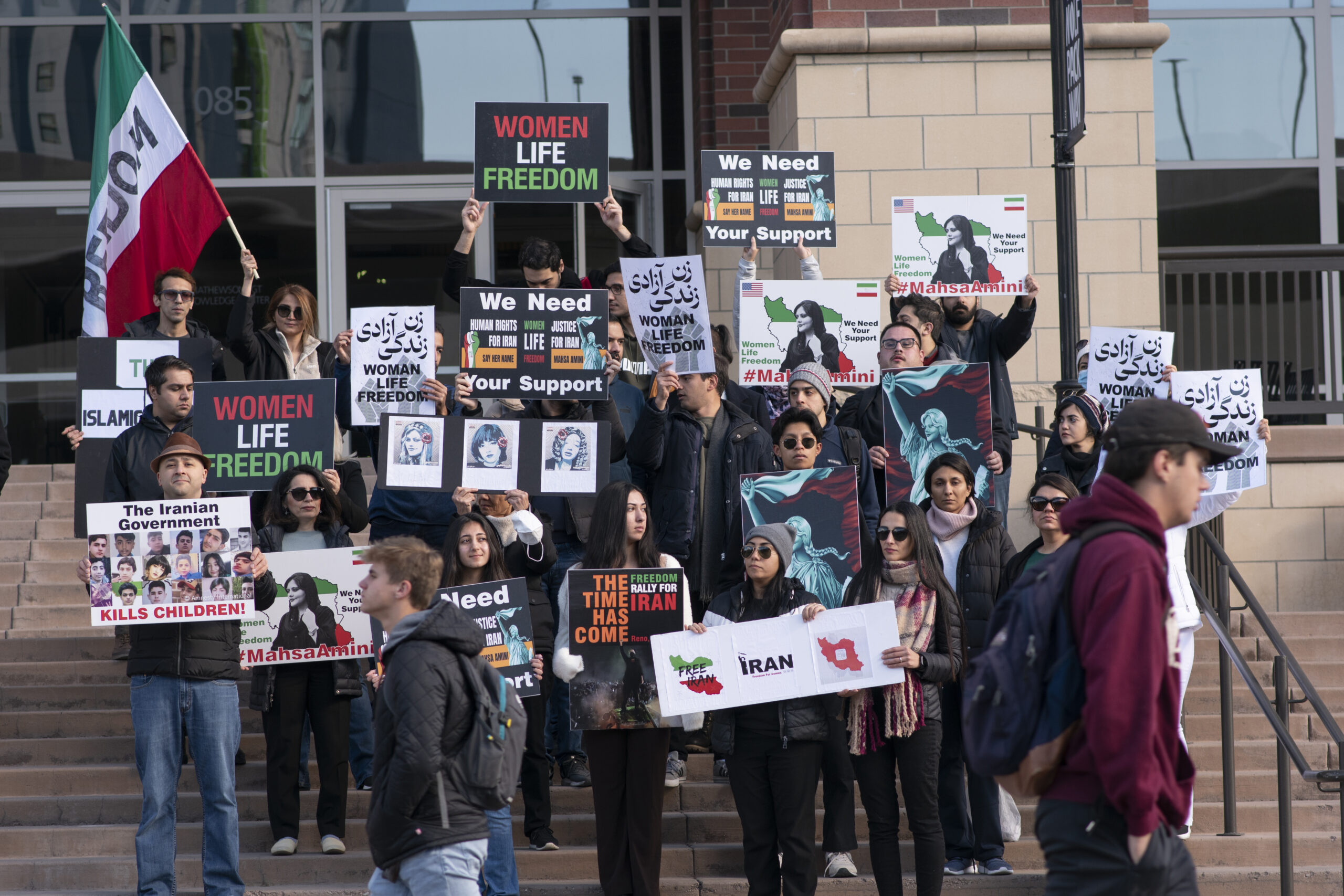 By Madison WancoDecember 5, 2022No Comments

On Nov. 30 around 200 universities globally came together to support the freedom of Iranian’s. There were tables and signs commemorating the lives that were lost in Iran in front of the Joe Crowley Student Union. This was the fourth rally organized on campus this semester to bring awareness and advocate for the people of Iran.

“Unfortunately the Islamic Republic’s  forces from September 16 until now have killed more than 450 people including 63 children. We have their beautiful photos here,” Tayebeh Goli, president of the Academic Council for Democracy Iran “They have detained more than 18,000 people.”

The group walked through campus holding signs pleading for the freedom of Iranian’s in their hope to raise awareness at the university. At the tables in front of the Joe Crowley student union they had photos and signs memorializing the victims of the innocent people fighting for justice in Iran.

The group also had paint for the public to use. There is a video of an Iranian child that had been murdered, who was painting a rainbow boat for the god of rainbows. That video went viral on the internet. The council wanted people to paint at the rally in memory of the nine year boy that was murdered. They had a set-up to allow people to write things for him if they wanted and paint boats with the colors of the rainbow.

A student from Iran spoke about their support for Iranian’s at the protest. They wish to remain anonymous due to possible repercussions of their statements. They are a member of the council responsible for the event.

They said that the Iranians protested but the regime is killing people and shutting down everything like the internet to shut down their voices. They also said that that is why they are protesting to be the voice of Iran.

Goli said that the club has many more events planned for the future. The Academic Council for Democracy Iran, the Iranian Students Association on campus and the Iranian community had several other rallies previously that were not exclusively held on campus. One of their rallies was a human chain downtown, another started on campus as they marched downtown and the other was held on McCarran boulevard. The other rally they held was a public demonstration with people that were cutting their hair in solidarity for Iranian’s.

At the protest on Oct. 22 where the Academic Council for Democracy Iran marched from the Joe Crowley student union to Downtown Reno the council had the same goals of raising awareness for the people in Iran and supporting their cause. A protester had a lot to say about the importance of their stance, showing support for the Iranian people and what they fight for.

“We want to show our support to Iranian’s that are protesting on the street, that are getting killed or injured, or getting attacked by Iran regime police and guards. We want to show our government that we do not want any deal or any negotiation with the current government because they do not represent us at all,’’ Hamid Taj said.

He said that the group wants to give their hand and heart to the Iranian’s that are doing the real work needed in Iran.

At the same rally one of the organizers Sogol Mirzaeennejad said that it was very easy to get people to come together to fight for the people of Iran.

The council is planning to have more rallies, culture events and panels in the future.