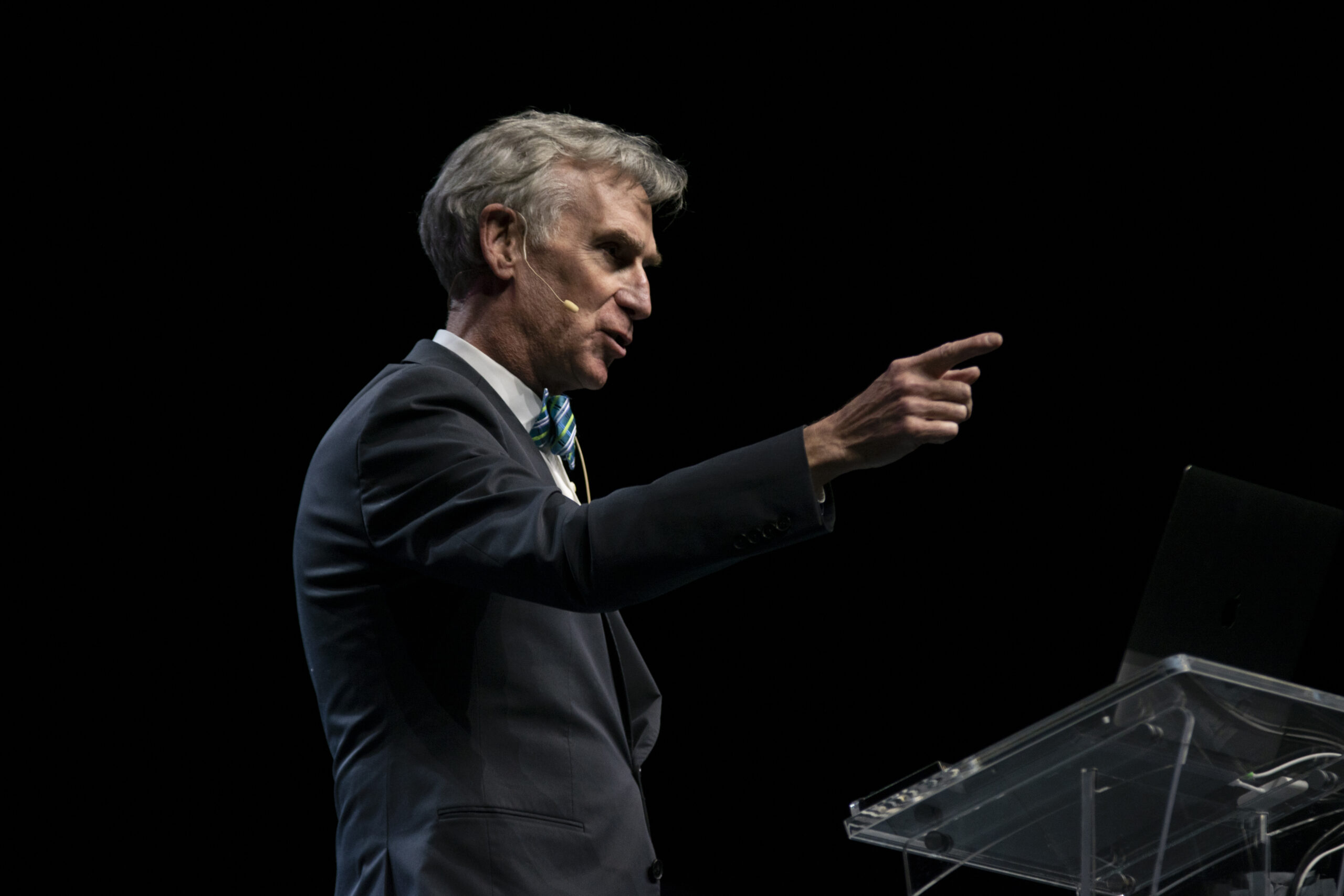 This story was originally posted on April 12, 2022. Visit the Nevada Sagebrush Archive to see all past stories.

Thousands packed into the Reno Events Center on April 2 to see Bill Nye, more commonly known as “Bill Nye the Science Guy.” Nye, a renowned bowtie-wearing scientist and entertainer, took a trip to Reno, Nev. on April 2 to do a presentation and answer questions from the audience on climate change, space travel and activism.

Among the audience were university students, members of the public, faculty and staff,  and the Nevada Association of Student Councils — an organization consisting of high school student council members from across Nevada. The association visited UNR and attended the event as a part of the NSAC State Conference, which took place from Mar. 31 to Apr. 2.

The audience was absolutely buzzing for Nye to present. However, Brian Sandoval, president of UNR, and Austin Brown, president of ASUN, took the stage first, giving their own short presentation on the university and ASUN to encourage the high school students to attend UNR and experience the “Wolf Pack Way.”

Sandoval, sporting a bowtie similar to Nye’s, noted Nye has a connection to Nevada as a distant cousin of the first governor of Nevada.

Thereafter, Sandoval and Brown gave a warm welcome to the star of the night as Bill Nye the Science Guy ran out to an ecstatic audience chanting the lyrics to the iconic theme song from his namesake television show.

Nye started his presentation with the topic of climate change. The first slide included a photo of Earth, Venus and Mars. Nye talked about “comparative planetology,” a term coined by award-winning planetary scientist — and his old Cornell University professor — Carl Sagan. He explained the average temperature on Earth, 58 degrees, Venus, 847 degrees and Mars, -81 degrees.

“Earth is perfect for us,” said Nye about the planet.

Although, he noted Earth is getting hotter and inching closer towards the temperature of Venus. For thousands of years, the earth has stayed at the same temperature, but it is warming rapidly. Nye exemplified this by showcasing the “hockey stick growth chart” popularized by climatologist Jerry Mahlman.

“Embrace the process of science and, dare I say it, change the world,” Nye said on how to tackle the issue of climate change.

He cited work from Stanford researchers, most notably Mark Jacobson, who claimed the United States could power the world renewably if they “decided to do it.”  In addition to reducing fossil fuels in the U.S., it would create jobs — with an estimated 3,000 new jobs just in Nevada.

To do this, the United States would have to switch to solar panels, rather than burning more fossil fuels. Nye believes this goal can and should be accomplished by 2050.

Shifting into his next topic, Nye took on the topic of politics and activism.

To start on this topic, Nye explained Euclidean geometry to the audience — the principle states that no two parallel lines will intersect. Although, even with this principle being seemingly concrete, the lines have begun to blur on what is principle and what is not.

Nye used Euclidean geometry and the argument of principles as a euphemism to something much bigger. Nye criticized the Republican National Committee for calling the Jan. 6 insurrection “legitimate political discourse.” This notion was highly supported by the crowd with mass applause.

“It is a crazy time we are living in,” said Nye in relation to this section of the presentation.

Nye cited the U.S. Constitution to transition back into his main topic, which states America is to “promote the progress of science and useful arts.”

In quoting this, Nye hopes for more space exploration to help further propel society, even though the cost of the endeavor is hefty. He continues to promote this notion as the Chief Executive Officer of the Planetary Society, an organization he has been active in since childhood.

Nye’s love and admiration for Sagan is evident during his presentation. Nye mentions Sagan’s work in space exploration frequently and advocates for the Planetary Society Sagan founded.

During the final section of the presentation, Nye went further in-depth about his love of space and hopes for exploration. He specifically noted the exploration of Mars and his hopes to find a microbe of some sort which will prove the existence of life on another planet.

Nye looked back to when he was a child, being marveled by the idea of space, and the time when his third grade teacher, Mrs. Cochran, told him that there are more stars in the sky than there are grains of sand on the earth. With a chuckle, he recalled thinking she was high.

Nodding back to the beginning of his presentation, Nye remarked on how small the Earth is in a bout of existentialism, or comparative planetology. This closed out the presentation as Nye flicked to the final slide that said “let’s change the world.”

During the final thirty minutes, Nye answered audience questions. Over 1500 questions were submitted to a Google Form that was given to the crowd before the presentation. All questions were asked by Jeff Thompson, vice president and provost of UNR.

The first question asked what he believed to be the best discovery ever made. His answer was the carbon-nitrogen-oxygen cycle discovered by Hans Beta, which proved that all humans are made of stardust.

The next question asked was something that social media users have been pondering on, which is if there are more wheels or doors. According to Know Your Meme, the debate originated on Twitter from the user @NewYorkNixon who asked this question to his followers.

The debate has been raging on since March, therefore the audience took it to the famed scientist. Nye was confused on the question because he did not know what constitutes a wheel or a door — other than the obvious.

Although, he did offer a followup answer to another social media debate on whether or not hot dogs are sandwiches. To this, he answered “no” because hot dogs are not served in half.

Nye was a part of many classrooms across the country, with some people even citing him as the one who raised them or taught them the most science. The next question referred back to this notion and how he felt about raising a generation and being a part of students’ lives.

The one thing Nye hopes that he did for students is encourage them to leave the world better than they found it.

Additionally, someone also asked what his life was like while shooting his television show. Nye’s answer: busy.

The next question asked about how he discovered his passion for science. Nye answered honestly and stated that he does not remember, although there are a few moments that he can think back to.

Nye remembered back to when his brother owned a chemistry set, infamous for being quite dangerous in the ‘50s and ‘60s. He recalled his brother mixing chemicals from the set to make ammonia and being amazed.

If forced to present one thing for the rest of his life, what would Nye do? Present on science of course, but more specifically the passion, beauty and joy of it — or the “PB and J of science,” as he referred to it.

The final audience question was about what inspires him. To no surprise, he said science.

“Science is the best idea humans have ever had,” said Nye. “The joy of discovery is the essence of science.”

The crowd roared in response to the conclusion of his speech and chanted his famous theme song as he walked off the stage. Bill Nye the Science Guy made for an unforgettable night in the biggest little city.

Featured image by Rachel Jackson for The Nevada Sagebrush.