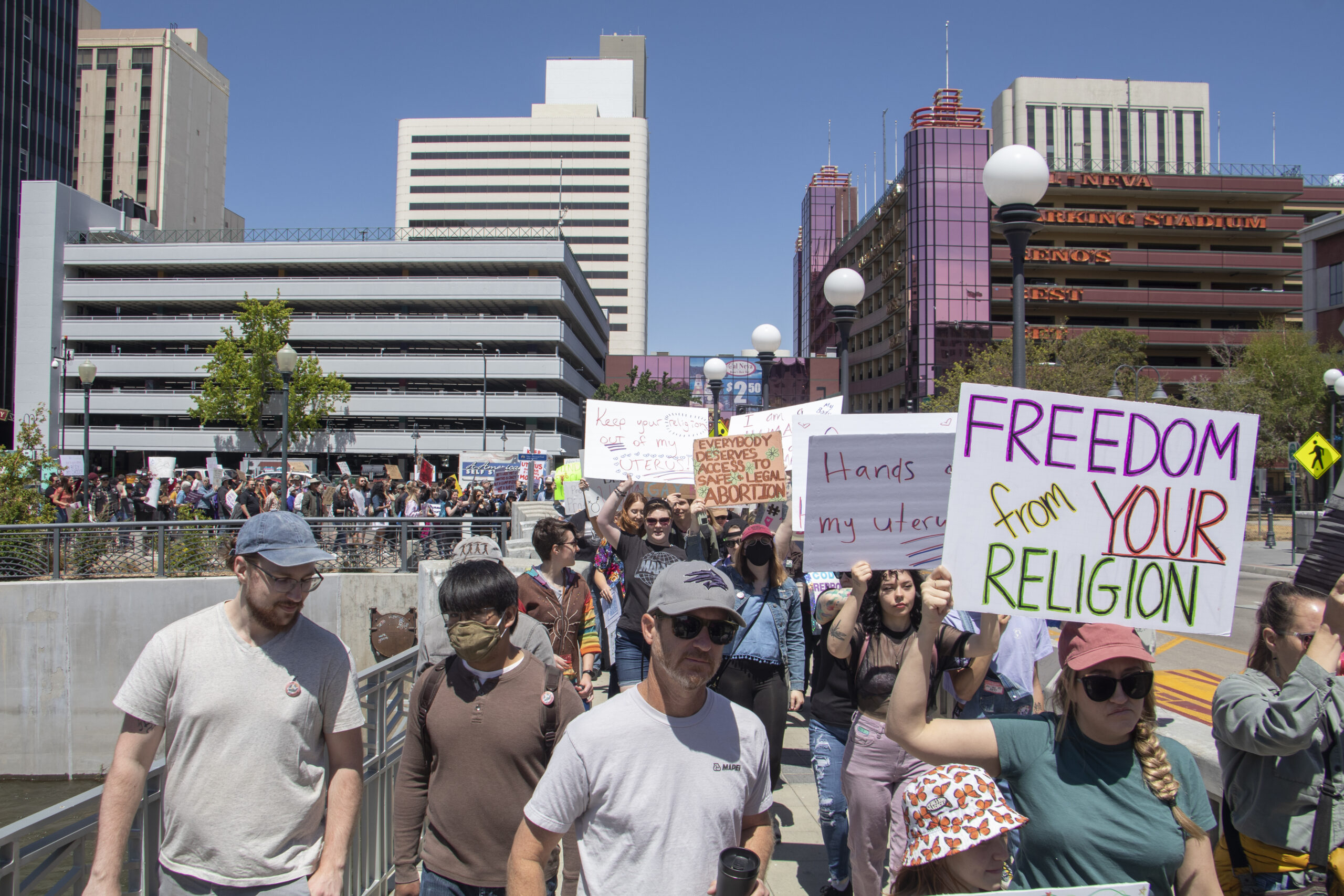 “An attack on one of us is an attack on all of us:” Reno community protests the potential overturn of Roe V. Wade

This story was originally posted on May 9, 2022. Visit the Nevada Sagebrush Archive to see all past stories.

People from all walks of life gathered on May 7 at the City Plaza in Reno, Nev. to protest the recently leaked United States Supreme Court draft that threatens to overturn the rulings of Roe v. Wade from 1973.

Samuel Alito, Supreme Court justice, wrote the draft opinion on Feb. 10 before it was circulated in the court.

“We hold that Roe v. Wade must be overruled,” Alito wrote in the draft. “The Constitution makes no reference to abortion, and no such right is implicitly protected by any constitutional provision.”

The goal of the opinion is to completely reverse the case of Roe v. Wade, which ruled to protect a woman’s right to have an abortion without governmental restriction.

The draft was leaked on May 2 to Politico, which resulted in an explosion of news. A press release from John G. Roberts Jr., Supreme Court chief justice, published on May 3 to affirm its authenticity and assure citizens that it was not a final decision of the court or any of its members.

However, the release did not stop the surge of protests all around the nation — one even happening in the biggest little city.

Over 100 people in the Reno community joined together in front of the “Believe” sign in the City Plaza to protest the draft and everything it entails. A collection of reproductive rights groups and non-profit organizations that advocate for Roe v. Wade organized the rally to protest the ruling’s eradication.

The protest began at 11 a.m., and individuals began trickling in as many activists began giving rallying speeches.

Nikkol Anagapesis, one of the leading activists of the rally, is one of the founders of Family Soup Mutual Aid — an organization in Reno who distributes harm-reduction necessities to the community and homeless people.

The activist talked about mainstream media’s focus on finding out who leaked the draft, rather than focusing on the reaction it ignited in people all across the nation.

“The right claims feminism isn’t needed, right? It’s just all optics. All genders are equal in this country. Well, find me one f—— law that limits bodily autonomy for white cis [gendered] men,” shouted Anagapesis to her audience.

Many speakers like Anagapesis who called for action received cheers and chants from the crowd in agreement.

In many of the testimonials, people repeated that “An attack on one of us, is an attack on all of us.”

Many carried signs in traditional protest manner which held more testimony from the participants, some even being carried by young children.

Some signs carried common sayings from those who are pro-choice like “bans off our bodies” or “abort the court.” However, other signs held a harsher, more vulgar tone, like one from protestors Kayla Cole.

Cole’s sign read: “Have you ever had a man rape you and finish inside you. No? Then shut the f— up.”

Atlas Gully, a participant of this rally, walked around and gave protestors shirts and signs to further ingratiate them into the cause and protest. The signs and shirts they gave out said “Pro-Freedom, Pro-Justice, Pro-Choice.”

“I’m here because I pretty much believe in … anyone’s right to choose. I chose to have my son and honestly … it’s hard, it’s hard to be a parent cause it’s really difficult and if you don’t want to do that then you shouldn’t have to do that,” Gully explained when asked why they attended the protest.

Maureen Scott, one of the co-founders of the Wild West Access Fund of Nevada, spoke about her organization’s resources extension during this national crisis.

“I think for our organization, [the goal] is to let people know that there are resources for them and there’s a community that will care for them if they need abortion care,” Scott explained. “We do have protections … and we have organizations … who, you know, will fight for abortion access as long as it takes.”

Once the speeches and testimonies ended, the protestors took a march down the Sierra Street and Virginia Street sidewalks, protesting by the courthouses and city plaza.

As they were marching, other protesters ran and joined in on the chants ranging from “my body, my choice” to “abortion is healthcare” and “abortion saves lives.”

Bystanders and onlookers cheered on the protestors, many honking their horns in support for the cause driving by.

Nancy Brewster-Meredith, a United States veteran, came out to the protest to support a right she believes should not be taken away.

“I’m here because this is about maintaining women’s rights, women’s privacy, particularly regarding abortion, and I am angry. I am so angry,” Brewster-Meredith exclaimed. “I stood under the flag so that you have a right to have an abortion and you have a right not to … That’s our country, and I stand by that. And I say if you don’t believe in abortion, don’t have one, but shut up.”

Maureen Scott discussed the similarities these protests have to the ones that first arose in the 1970s, during the time of the enactment of Roe v. Wade.

“I’ve talked to many people in older generations, and they’re devastated … with tears in their eyes,” said Scott. “They never thought that we’d be here, and they’re just crushed that we’re right back to where we were in the 1970s.”

Kaitlyn Silvey, another representative of the protest, claimed that the power of women’s health care needed to be taken out of the hands of people in the Supreme Court who do not represent the majority opinion.

“We’re here because we need equal protection under the law. Abortion is healthcare. The Supreme Court — if this draft opinion is true — has grossly overstepped,” Silvey claimed.

As people cheered in the plaza for the final marchers to join together, they continued to chant as they huddled together one last time in the final moments of the rally.

Before completely dispersing, Anagapesis and other leading activists in the crowd handed out pieces of chalk so people could write their own messages on the ground of the plaza to advocate for their abortion rights.

“No body is safe until every single body is safe here,” Anagapesis finished before the the majority of the people began to disperse.

The rally began to fade and ended around 1:15 p.m.

The protestors and organizers of the event planned another protest for May 14 at 11 a.m. in the plaza again. They plan to continue their protests, rallies and events against this draft for as long as it takes to receive justice.