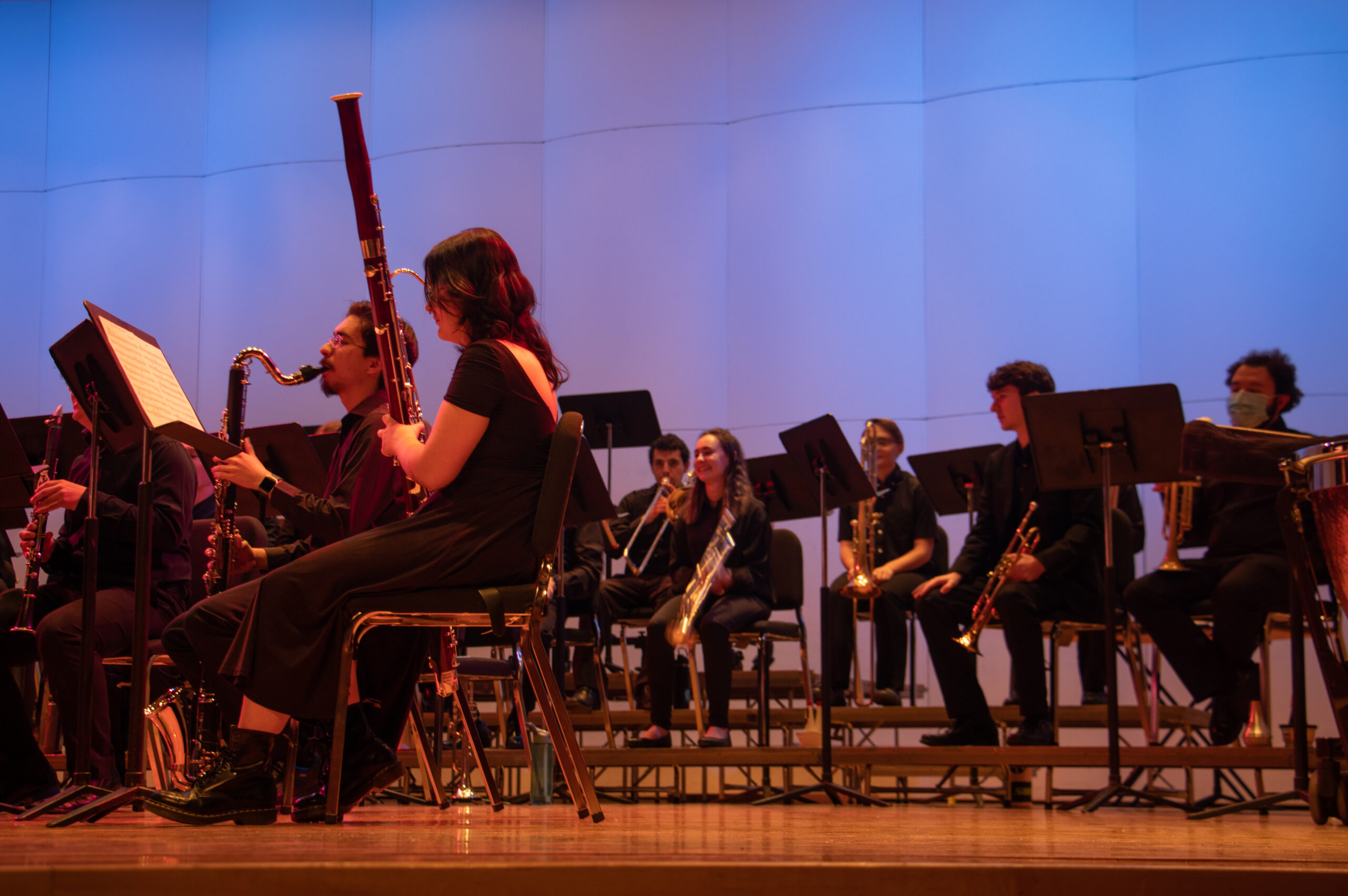 There just happens to be some beauty in bassoons

This story was originally posted on April 14, 2022. Visit the Nevada Sagebrush Archive to see all past stories.

Sitting in the dark room under just a few lights centered on the stage in the Nightingale Concert Hall at the University of Nevada, Reno looks like a piece of heaven for the audience.

All of the members of the Nevada Concert Winds took their spots on stage, arranged in their special order with the small instruments up front and the larger instruments towards the back.

Soon enough, the entire audience knew when Reed Chamberlain, the director of Bands, took the stage when a splendid basic tune of all the winds announced his arrival. He waved, took his spot at the front and the show began with a fast-paced rhythm.

The piece “Toccata for Band”, originally composed by Frank Erickson, is a song that is a great introduction to the concert. It’s uplifting with a few smaller parts and the trumpets dominate the piece, something each of the players did wonderfully. The song is one that could remind people of a classic arrival of a king in the older Victorian Era movies.

It has a bit of a repetitive nature to it, but nonetheless the combination of instruments is beautifully flawless.

Chamberlain left the stage and the winds had a pause before graduate assistant Max Deger led the winds through two songs: “Reminiscence,” originally composed by Kathryn Salfelder, and “American Riversongs” by Pierre LaPlante.

Their re-creation of Salfelder’s piece wasn’t as captivating as the previous performance, as the feeling of uncanny horror hit with the rising tempo. However, the soft tune after the commotion allows for a nice and calm fade at the end.

LaPlante’s creation has a bit more of an enthusiastic appeal. It feels like an exciting marching song with an elegant softness. Towards the end, the build of all the instruments using a racy beat of the drum creates a wonderful finish full of satisfaction for the audience.

Applause echoes through the room and soon enough, graduate assistant Darian Larsen takes the stage for the “Jocuri Popolare Romanesti.” It is also known as the Romanian Folk Dances, originally composed by Bela Bartok and translated by Yo Goto.

The six pieces in the collection are “Jocuri cu Bata”, “Braul”, “Pe Loc”, “Buciumeana”, “Poarga Romaneasca” and “Maruntelul,” all of which give off different vibes.

The winds did a wonderful job on “Jocuri cu Bata”, a piece which feels like you’re watching a movie and you’ve hit the climax of the plot where a hero takes on his adventure and risks a dramatic death. The feeling is immaculately portrayed and gives the listener a sense that they are actually in the moment in real time.

In the fourth song, “Buciumeana,” the tone is creepy and feels like an evilness is calling to one’s soul. This piece would be one that is played when the enemy takes over the hero’s world and almost defeats him, giving off a sad rhythm to finish.

There was a short break as the audience applauded for the excellent work of the Nevada Concert Winds and the Nevada Wind Ensemble took the stage.

It started off with a much smaller group of people, most of them with the small instruments, all huddled closer to the stage rather than sitting in the back.

Chamberlain takes the stage again, with the musical announcement by the ensemble, where he is to conduct two collections: “The Good Soldier Schweik Suite,” originally composed by Robert Kurka, and “Suite Française” composed by Darius Milhaud.

The performance of this collection was a little less than expected. There were moments of awkward pitchy sounds that could not be covered up easily—seeing as there were only a handful of instruments being played on stage.

The tune was more monotone in later pieces, but there were a few good moments. For example, the oboes carried the performance, seeing as their tones were almost always on point. Some of the fast build-ups were good, but a lot of the instruments sounded too pitchy which threw the performance off balance.

When “Suite Française” began, more performers joined the group on stage and filled out the chairs more, which brought hope to the audience—seeing as there will be less mistakes to be heard through the clouds of the instruments’ noise.

During the second piece, the two bassoon players snatched the spotlight with their excellent playing. They created a deep lead in with soft trumpet sounds that follow to help enter into the wonderful piece.

Soon after the collection’s dramatic finish, the next conductor, Darian Larsen took the stage for the final piece “Folk Festival.” It was originally composed by Dmitri Shostakovich and translated by Donald Hunsberger.

This piece is a peppy, dancy song that allowed for a great finish to the entire recital. It gave a final hurrah to the entertaining pieces of the evening and resembled the type of music that would be played at a ball in the 19th century, full of elegant and uplifting sounds that all the instruments can dive into.

There was a dramatic build-up at the end before all of the instruments grew at a rapid pace and ended with a big finish.

The remaining performers stood as the audience climbed to their feet, applauding both the winds and ensemble for their excellent performance.

Jaedyn Young can be reached at jaedyoung@sagebrush.unr.edu or on Twitter @jaedyn_young3.