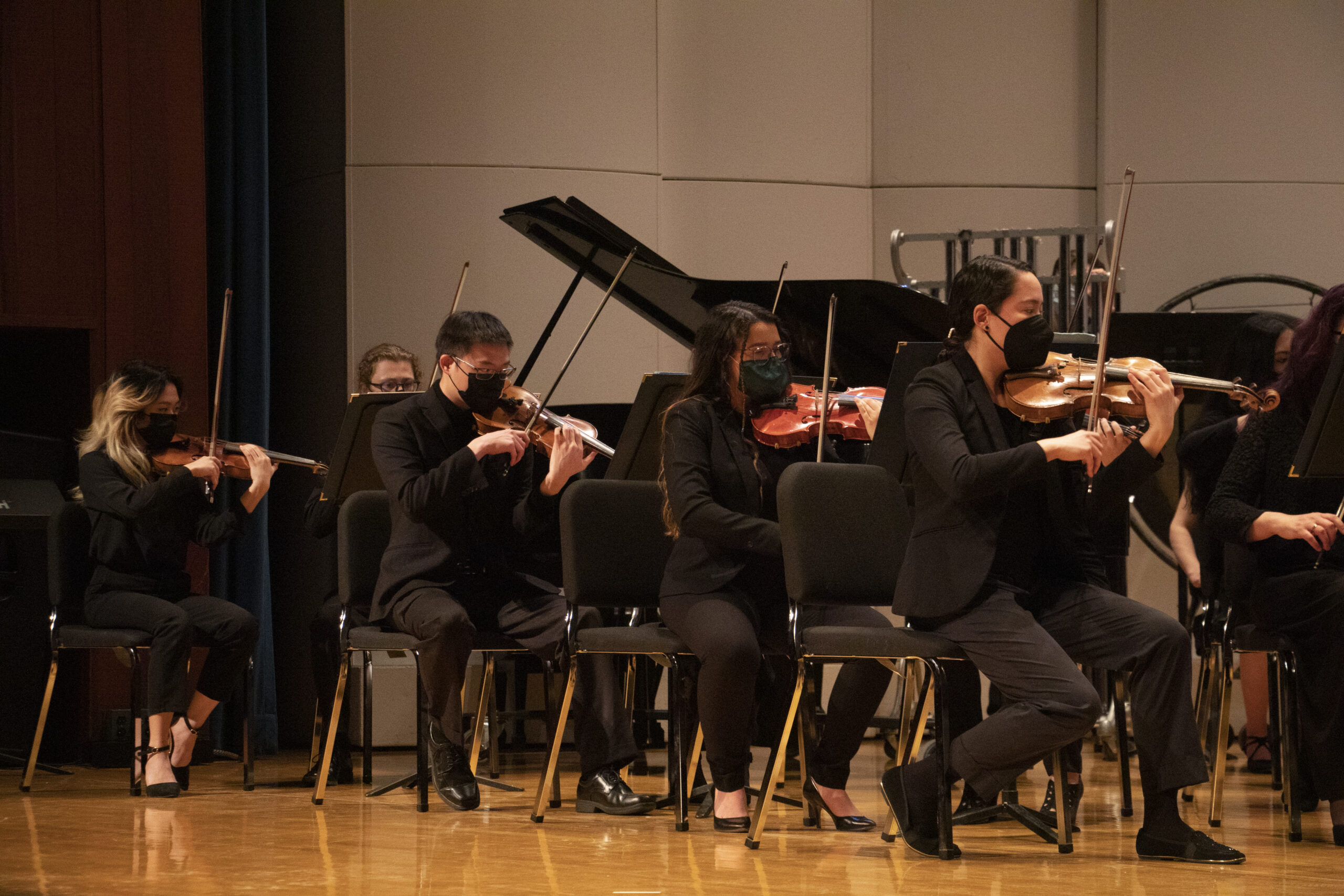 UNR honors concert: Who would’ve known one little mistake could do so much damage

This story was originally posted on April 16, 2022. Visit the Nevada Sagebrush Archive to see all past stories.

The University of Nevada, Reno’s Honors Concert is put on annually, with this year being on March 8, and allows five soloists to perform at the Nightingale Concert Hall, each playing a different instrument.

The five chosen this year included Sashekia Brown, a sopranoist; Alexandra Gordon on the oboe, Jürgen Hirt on the bassoon, Audrey Lim on the viola and Robert Smith on the trumpet.

Unfortunately for Gordon, her solo was the only one that the symphony orchestra seemed to mess up just after the intermission.

However, the concert initially started with flying colors.

The first movement began after the conductor took the stage and led the orchestra through “La Cathédrale Engloutie” by Claude Debussy. The song is from Preludes Book I, which is orchestrated by Peter Lawson.

The piece began with a lovely strum of the harp before the soft lullaby grew intense, and the trombones added a deep thrum to the harmony. The entire orchestra soon joined in to play a tone that builds like an epic battle scene teetering on the horizon.

With just the beginning, the low sounds of bells tolling and the phenomenal haunting tone that followed soon after sent chills down the audience’s spines. There is a quiet fade-off and then the room is silent before the audience breaks into applause.

After the introductory song, Smith took the stage, followed by Jason Altieri, the main conductor of the concert.

As the orchestra gets settled, it is clear who the soloist is. Smith stood at the front of the stage, faced the audience, while the conductor stood facing the orchestra, who sat in a half circle of chairs behind the soloist.

The concerto for the trumpet and string combination is in E flat major, performing three pieces including “Allegro,” “Largo” and “Vivace” by Jan Krtitel Jiri Neruda.

The first piece, “Allegro,” is an upbeat song that sounds like it could be played during the medieval ages. At a few points when the trumpet is isolated in its sound, Smith does a great job of maintaining the perfection of the piece. Then, the piece picks up—even the conductor does little dance moves to get into the music.

“Largo” follows quickly after with a gallantly graceful tone that is perfect for a fancy 18th century ball. When the trumpet performs another solo, it loses the movement a bit and doesn’t sound as good as it did in the first piece.

The final piece, “Vivace,” is racy and exciting, a fitting song that could follow the moments of someone racing through the streets to catch the love of their life.

When the trumpet player recuperates after an extraneous amount of solo parts, he does improve a bit. Eventually his playing does become strained and he has a lot of faults in his final solo parts of this piece, leaving the audience to feel a bit deflated by his performance.

There’s a short break after Smith exits the stage before Hirt enters, with his beautiful large bassoon resting in his arms. The main conductor takes the stage soona after and the Hirt’s concerto in F major, Op. 75. Hirt plays three pieces by Carl Maria von Weber including “Allegro ma non troppo”, “Adagio” and “Rondo – Allegro”.

In “Allegro ma non troppo,” there is an abrupt beginning with an intense combination of strings, trumpets, drums and flutes.

When Hirt breaks away with his bassoon solo, it’s an absolute jaw-dropper.

His fast flying fingers, confident persona and great dynamic with the orchestra carries the entire song through to a fantastic finish that shakes the entire room.

The next piece “Adagio” has a sadder tone to it. Hirt impressively plays a higher tune, one rarely heard on such a deeply-toned instrument. He even contributes beautifully to the sade fade off of the piece.

The grand finale of “Rondo – Allegro” fills the room and it’s a much faster pace, one that is hard to keep up with even for the spectators.

Watching Hirt’s fingers race along his instrument in a fluid motion is incredible. Even with the racing pitches, the catchy rhythm of his playing alongside the strings is quite captivating.

The audience applauds and Hirt exits the stage, followed by the other orchestra, where they tale a short ten minute intermission before the next three soloists can perform.

The next one is where the real tragedy happens.

When Gordon takes the stage followed by the conductor, she is a well-recognized player going for a Master of Music Degree in Performance at the university.

The concerto is centered around the oboe with a small orchestra, consisting of three pieces by Bohuslav Martinû including “Moderato,” “Poco Andante” and “Poco Allegro.”

The first piece starts off soft, with a high-pitched playing and a good extensive build-up by Gordon’s oboe. Not even a minute or so into the piece, the conductor falters. The audience hears a fault in the performance, but they keep going.

The orchestra falters again. Gordon is clearly shaken by the fault.

The conductor, instead of trying to pick up the position again, completely stopped the song. He smiled and gave the listeners a small wave to signify that it was alright and they would just start again.

There were a few light laughs that echoed through the audience and the orchestra prepared to pick it up from the start.

Gordon’s eyes filled with tears and the sense of panic and distress whipped through her expression as she regained her composure. When the conductor looked to her for the go-ahead she paused to take a minute to keep her tears at bay.

She took a deep breath before she nodded to him, put on a brave face and began playing again.

Gordon played her instrument magnificently, but the song is not finished quite perfectly. The trumpets were a bit off-key at moments in the piece. Her oboe carried the good sounds of the song, but they do much better in the second one.

The second one was a great follow-up to the incident before because it created a sad, dramatic tune of sorrow in the audience’s hearts to mimic what Gordon is feeling.

The combination in this piece with the piano and oboe is beautiful, though. The addition of the light strings in the background also allows for a dramatic build-up of beautiful and fast playing. Somehow, Gordon smoothly maintained her flawless performance on the oboe, an instrument most know is extremely difficult to play on.

The music transitioned into “Poco Allegro”, which gave an epic ending to Gordon’s solo collection. The beat is fast and the rhythm is rapid, with short and abrupt pauses between each dramatic moment.

In this one, it was obvious that Gordon gave it her all to make the piece sound exquisite despite the error at the beginning, it was easily forgotten with her incredible playing for the remainder.

After Gordon exited the stage looking strained, there is a brief pause before Brown took the stage wearing a gorgeous cream dress with glitter that reflects off the bright lights illuminating the stage.

The beginning of the first piece was enough to catch anyone listening off-guard. Her voice will send chills up your spine from its smooth magnitude.

The second piece was a bit sadder, and the audience felt the music as her vocals transitioned and connected gracefully to the other instruments’ sounds.

In “Tais-toi, Babillarde,” the instruments began the piece instead of her vocals, starting with a fast beginning before Brown joined in at a perfect time and matched the pitch perfectly with her extensive vocals.

In the final piece, it ends the entire collection with a happier tone of fast pauses and breaks, ones that were impressive to watch the soprano master.

After her performance, she exits the stage with applause following her behind the door.

The last soloist came out soon after, with her viola to perform a simple piece, “Vivo, e molton preciso” by William Walton. Lim was wearing a beautiful red dress and carried her smooth viola out along with her.

Her instrument has the strongest tone and was definitely the loudest out of the five. Her playing in this piece is dramatic, fast and exciting—keeping the audience on their toes as they tried to keep up with the dramatic build-ups of the other instruments around her.

It’s impressive to watch how fast her fingers move and easy to stay attuned to her flawless playing.

The finishing note was abrupt, but it created a dramatic ending for Lim. She exited the stage with the applause vibrating behind her.

Finally, the entire orchestra rejoined the stage, not one instrument left behind as they began the last piece “España”, a rhapsody for the orchestra, by Emmanuel Chabrier.

Before the piece started, the conductor asked the audience to applaud the soloists once more and cheer for the accompanying orchestra. He quickly added a bit about his own experience and understanding their stress and commitment, before he resumes his conducting skills and lets the orchestra music fly.

The piece is slow at first as each instrument slowly adds their own parts to the beat. When the rhythm builds, the song sounds like fighters marching into a battle. It is intense, dramatic and gallant all at the same time.

The piece is a bit repetitive, extending longer with the abrupt breaks of different instruments playing little snippets of their own sounds. However, the ending is dramatic and has one of the strongest finishes of all the pieces.

The audience cheered once the symphony finished, and the entire symphony got on their feet to accept the applause.

Even though each collection had its faults and there was a challenging mishap to Gordon’s performance, the orchestra and the soloists still managed to sweep the attendees of this concert off their feet with a simple collection of heartfelt songs.