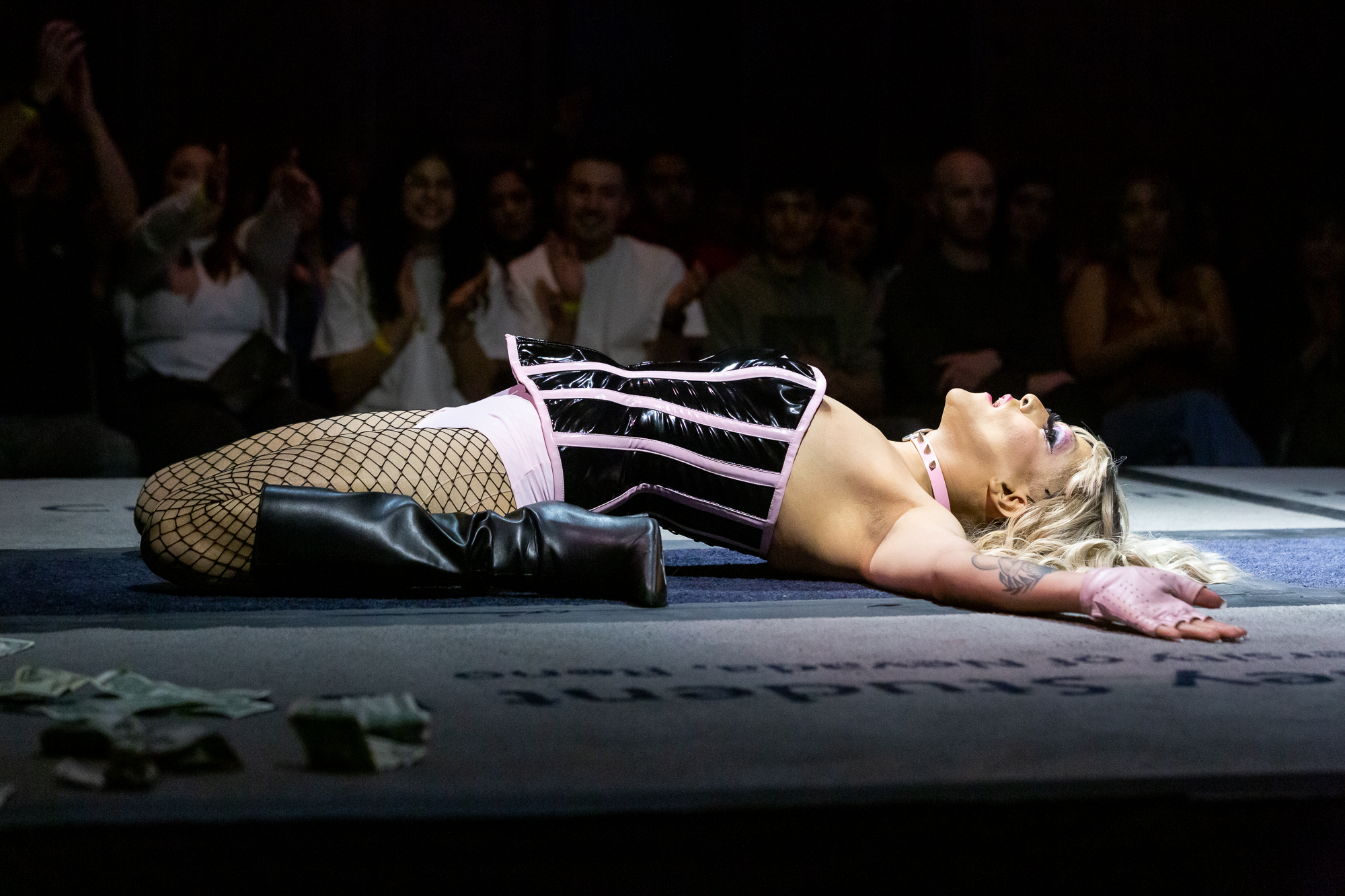 If anyone’s ever seen “RuPaul’s Drag Race” series, then you know exactly how these drag queens serve fish on the big stage.

One of RuPaul’s old contestants from season 11, Silky Nutmeg Ganache, slayed the stage when she came to the University of Nevada, Reno’s Joe Crowley Student Union ballrooms. Not only was Silky showing all of her fans how to sissy that walk, but she got to participate in the judging of the other contestants who put on the best drag race of their lives.

After COVID-19 halted the in-person performances the past years, the drag queens were back and ready to show off their sickening skills.

When Ganache was introduced, the crowd fell in love with her. She spent the first hour of the show just entertaining, as she does best.

Ganache threw massive shade at a young UNR student named Rommel at the beginning of the show to hype up the crowd and remind the audience that she is the queen bee.

After that brief bit of entertainment, Ganache introduced the judges of the show. The panel included Malandi Pinay, last year’s UNR drag show winner, Jimmy Roque, Ricky Salazar and Professor William Macauley. She messed around with the audience for a bit, collected dollar bills and hung out with the crowd before she introduced the drag queens.

Each walked out on stage doing a brief walkthrough before the show began, and the audience stood and cheered as the queens made their debut for the night’s show.

Then, the competition was on. In the first part of the show,  three competing UNR students hit the stage.

The beautiful Madam Florence Jane Parker started us off.

Parker danced and lip-synced to the song “Snakeskin” by Rina Sawayama. The young drag queen had two backup dancers dressed in all black, who grampled at her dress and appealed to her dramatic flare. She wore some legendary gold gloves with a snake skin shawl, but she stripped down her outfit to add to the dramatics.

Her performance was a great opener, but the next contestant may have been more memorable, Kalypso — who stole the show before she even entered the stage.

The audience was rewarded with the dimming of the lights and a sassy video introduction before the lady legend strutted on stage to Lady Gaga’s “Telephone.”

Wearing a white wig with a black jumpsuit, Kalypso walked through the crowd like a baddie and lip-synced to the iconic song.

After a brief costume change with video effects to replace her absence, the star had the crowd roaring for more when she finally exited the stage.

Coco MonStar, the final queen in the drag race for students, was definitely a show-stopper who walked out to the iconic “Shut Up and Drive” by Rihanna.

She wore a pink and black shiny corset with black fishnets and some sassy moves. She even did a sexy drop at the end that had the crowd roaring.

The first to strut her stuff on the stage was Norvina Valoure, one of the many luscious queens in the Valoure Haus.

She walked the stage with a remix of Doja Cat’s “Woman” and Nelly Furtado’s “Promiscuous” wearing tall, black boots, as she should.

Then, Xitanya Valoure hit the stage in a black trench coat with black heels and a silver collection underneath, followed by her sister Victoria Valoure soon after in a sparkly bodysuit and white gogo boots.

The Haus of Valoure had some glamorous drag queens, but the next few drag stars came ready to rock the stage.

Ari walked out in a red and black leather outfit with thigh high boots and some tumbling moves. The drag queen rolled out on the stage, ran and tumbled through the aisles and did plenty of somersaults and half-splits throughout the performance.

Ari wowed the crowd with her rebellious spirit and saucy outfit, before Donna Sux DoesMoore walked out in all black with silver, sparkly heels.

Donna wore a sexy Afro wig and some sparkly jewelry as she strutted her stuff for the crowd who fell in love with her the moment she hit the stage.

Not to mention, the drag queen did all of this after just getting knee surgery done.

Sofia Evans, the next queen in line, came out in a crimped white wig with a blue and purple patterned dress, black fishnets and short black leather boots. She walked on stage doing the works — cartwheels, jump splits and somersaults to “Hot N Cold” by Katy Perry.

The drag star brought her mom and grandma sitting in the crowd to tears from her incredible performance.

Then the House of Twampson took over the stage in the last few minutes of the show.

Shania Twampson, dressed like a drag-version of the Queen of Hearts, does a remix of “I Will Always Love You” by Whitney Houston. The meme of the little girl who went viral screaming the lyrics adds some hilarious comedy to the show.

At one point, she even uses a leaf blower to have an epic Beyoncé moment before she holds up a poster about spreading love instead of hate.

This leads into the introduction of her drag sister, Maria Twampson who walks out in yellow and red with a full body outfit of fishnets.

Maria Twampson was really the drag star who stole the show.

She does pirouettes, backflips into a back handsprings, cartwheels, splits and jump kicks before finishing with a final kick into a final drop motion. She had the crowd roaring and throwing plenty of bucks at her as Silky fanned her at the end.

After Maria — the crowd pleaser — left the stage, Aspen Meadows, a regular performer in Reno, took the stage to show off some Britney Spears songs.

She had four backup dancers who wore similar outfits, mimicking her black and white striped attire. Aspen was a great finale to the end of the show.

Soon after, the judges brainstormed their results and Silky announced the winners.

The winner of the student drag racers had been Kalypso, one that the audience definitely had loved.

The winner of the local performers was Ari, which happened to stir up some controversy amongst the other drag queens.

However, Silky also picked a group of drag stars who she thought put their all in. The winners of the Silky Nutmeg Ganache Talent Award included Madam Florence Jane, Norvina Valoure, Donna Sux DoesMoore and Maria Twampson. Each of these award winners won $50 for their excellent performances.

That wasn’t all the crowd got from this excellent show.

With a wonderful finale to an entertaining evening, Silky gave everyone the moment they’d all been waiting for.

In her sparkly dress, Silky rocked the stage, dancing and lip-syncing to some Whitney Houston songs, a classic for the drag queen.

Silky dragged the show’s finish with her sassy attitude and incredible performance skills, something the audience had been waiting the whole night for.

Before her departure, Silky told the audience “The world is changing and you must push for that change.”

This would be a night never forgotten for every drag fan in the room.