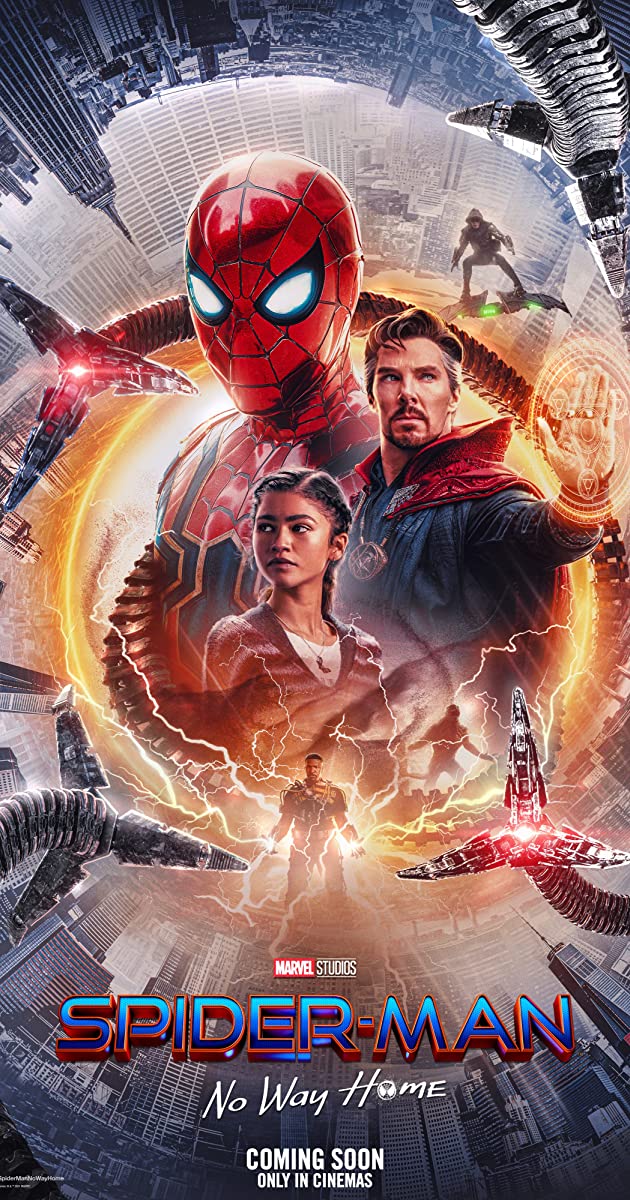 With great power comes the best Marvel movie of the year

This story was originally posted on April 7, 2022. Visit the Nevada Sagebrush Archive to see all past stories.

Who could’ve known Uncle Ben would play such a high role in Marvel fans’ lives with one little quote.

Just imagine the scene, in every “Spider-Man” movie or comic, Ben Parker looks into the eyes of a young Peter Parker and says: “Now remember, Peter: with great power comes great responsibility.”

This scene, engraved in our heads, will remain absolutely iconic forever.

In the new “Spider-Man: No Way Home”, not only do we get a last feel of the scene played out when Aunt May repeats this iconic line, but we finally get to see how all three different universes of Spider-Men learn the importance of the quote.

That’s right, folks. Tobey Maguire, Andrew Garfield and Tom Holland meet in one universe to save the day. And it’s awesome.

Now take a deep breath before we dive in, because this may just be the most iconic Marvel movie fans have ever seen on the big screen.

First, let’s recap what has happened so far in this Spider-Man franchise.

In “Spider-Man: Homecoming”, Peter Parker, played by Tom Holland, is back from his battle in “Captain America Civil War” where he fought on Team Tony. Throughout the film, he has to find his way back into a normal routine with his Aunt May, played by Marisa Tomei.

It seems superheroes never do get a break though, as a new villain known as the Vulture, emerges to destroy Spider-Man and the world. Long story short, cities are destroyed, people are saved and he defeats the enemy.

The only fun and different thing about that movie was its portrayal in Europe.

In “Spider-Man: Far From Home”, we get to explore a bit more into Michelle Jones or MJ, played by Zendaya Coleman. After the Avengers franchise’s blip storyline, where half of the universe disappears for five years, our friendly neighborhood Spider-Man reappears, gets back into his school life and goes on a trip to Europe.

What could go wrong? Enter the villain “Mysterio,” played by Jake Gyllenhal, who tries to destroy the world by bringing creatures known as “Elementals” to destroy all the big cities in Europe. In the end, Mysterio dies and Spider-Man gets the girl and it feels a bit cliche. But you’ve thought too soon if you predicted a happy ending.

Before he dies,  Mysterio executes his final blow. Spider-Man gets exposed to the world.

Not only is his identity exposed to everyone he knows, but he is also blamed for the destruction in Europe and is accused of wrongfully murdering Mysterio.

What is he supposed to do now?

“Spider-Man: No Way Home” leaves off right where the prior ended, in chaos. With Peter being framed and his identity revealed, he must navigate high school, love and friendship in the public eye. This is a brilliantly new idea to work off of instead of just the normal Spider-Man “finding himself” plotlines.

Spider-Man, his sidekick Ned Leeds, played by Jacob Batalon, and his girlfriend MJ must find a way to lay low, not die and get into their dream college—the Massachusetts Institute of Technology.

When Parker discovers he and his friends weren’t accepted into MIT because of his identity being revealed, he realizes being exposed as Spider-Man is far from ideal.

Parker must turn to a couple of allies, including Matt Murdock and Avenger accomplice, Dr. Stephen Strange, played by Benedict Cumberbatch, to help him make the world forget Spider-Man’s identity. But that only seems to make things worse.

What are we expecting though? Something always goes wrong in these action movies.

Though, when Strange tries to conjure up a spell to make the entire world forget, Parker tries to alter it by adding a handful of people who he wants to remember him as Spider-Man. Little did he know, destruction would follow as the alterations to the spell pulled in villains from the multiverse.

Certain members of Marvel Comics’ “Sinister Six” make an appearance in the new movie. Starting with Doctor Octopus, Spider-Man has to capture all of the enemies of past Spider-Mans from alternate universes and send them back from where they came.

For all the Maguire and Garfield fans out there who were waiting for the moment to see their old, favorite villains, it’s your time to shine.

The audience got to relive their fantasies by watching Electro, Lizard, Sandman, and the original Green Goblin on the big screen again. And wow, do they do a splendid job. Even though the majority of them only have a few lines, Green Goblin and Doc Ock definitely shook up the watchers with their amazing acting skills. Both villains were constantly switching back and forth between the dark side and the good side. It was captivating to try to keep up with.

Strange tells Parker he has to capture them all and send them back, but instead of listening to Strange, Parker takes advice from his Aunt May and decides to try and cure them before sending them back with a new purpose. Typical Peter, always trying to save everyone else.

He traps Strange in the mirror dimension and uses his smarts to change the villains into something new. This entire scene was hilariously played out. Most of the audience knew Peter would find a way to outwit Strange, but the fact that such a young kid tricked his mentor in his usual goofy-teenager way was a nice change of pace for the clichés. Once Strange is locked away, Peter gathers the villains to find a way to cure them.

This is where things get blown out of proportion, which was inevitable but still depressing to watch.

The villains decide they don’t want to lose their power—wow, it’s like no one saw that coming—and they destroy the apartment complex that Peter, Happy Hogan and Aunt May are staying in.

Caught in the middle of the conflict, the beloved Aunt May dies in Parker’s arms and the entire audience seems to deflate from the end of her storyline.

In the meantime, MJ and Ned are panicking and trying to find where Peter went. Ned, holding the “Sling Ring” that Strange uses to create portals, seems to find himself as a brand new sorcerer. When he accidentally conjures a portal looking for Spider-Man, he finds himself face-to-face with the other two alternate dimensional Spider-Mans, played by Andrew Garfield and Toby Maguire.

That’s when the entire audience freaked out. This may have been the most iconic scene the fans of the Marvel Cinematic Universe have ever seen.

The rumors that were blowing up the internet during the movie’s creation, were true. Garfield and Maguire were standing on screen, living and breathing the same air in the same dimension as Holland. The miracle of the trio of Spider-Men was finally here.

When the two other Spider-Men find Peter sitting on a rooftop, upset about May, they convince him that he needs to be the bigger person and help the villains become better like a true hero should.

The three versions of Peter Parker set off to develop a plan to cure all the villains and send them back. There’s a bonding moment of Peters where they each talk about their love interests and viewers get a taste of the same heartbreaking feeling they got when the beloved Gwen Stacy, from The Amazing Spider-Man franchise, died just before being saved by Garfield.

Soon after, the three Spider-Men develop the cures and start the villainous battle. Doctor Octopus, who had already been cured, has a heroic moment where he even helps the Spider-Men send the villains back. During battle, Maguire has a close call, but the Spider-Men win the battle.

In the end, Peter 1, Holland, learns his lesson. When Strange appears during the epic battle scene, he recreates the original spell to reverse the effects. And as for his identity as Peter Parker … well once the spell kicks in, he no longer exists to anyone.

Peter 1 says goodbye to his best friend and girlfriend and all of the villains. Peter 2, Maguire, and Peter 3, Garfield are sent home with no memory of the battle.

MJ, Ned, Happy and everyone that ever knew Peter Parker or his true identity, no longer have any idea who he is.

In the end, Parker has no family or friends left. He walks into a coffee shop where he sees Ned and MJ and he’s happy to hear they’re both going to MIT, but the scene does some emotional damage to the Spider-Man supporters. It was such a hurtful ending, but it strayed far from the predictable happy endings. “Spider-Man: No Way Home” is so good, because it’s actually more realistic than the other movies.

Where is Spider-Man supposed to go from here?

Amy Pascal, a co-producer of the third Spider-Man franchise, confirmed Holland would be playing in three more Spider-Man films.

Fans knew Holland would be back on the big screen in no time. Since the comics have plenty of villains for Spider-Man to fight, there are many more plotlines to go around.

But will these villains be fought without help from MJ or Ned? Or will the creators find a way to make Parker’s friends remember him again?

This movie, placed at the best movies of 2021, not only finished the franchise with a collection of plot twists and remarkable moments, but it also set a new pathway for Peter Parker fans to follow in the MCU’s future.

As of right now, it seems Parker has learned his lesson, that great power comes with great responsibility. Now he has to find a way to deal with the consequences.