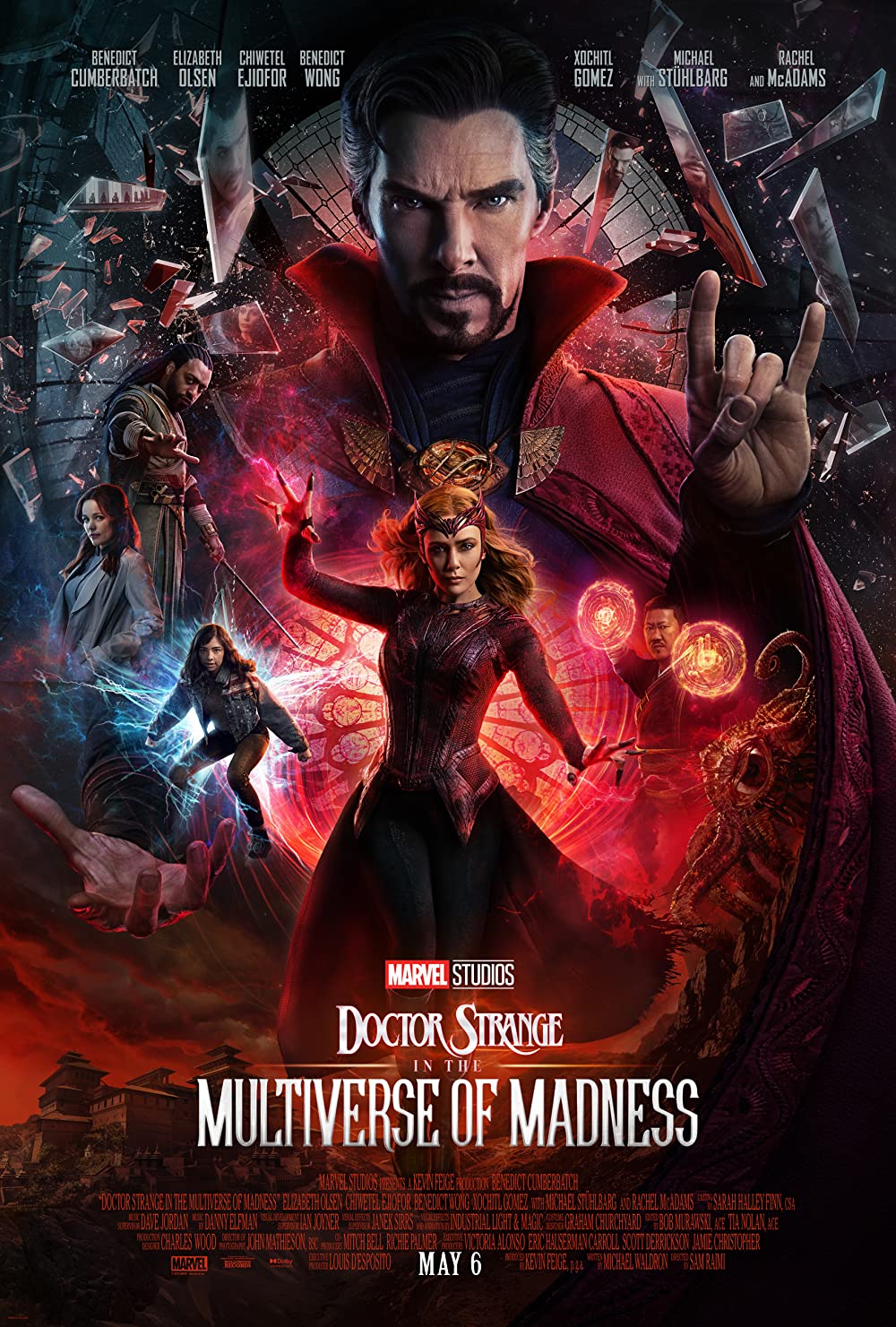 Who let the big bad “Scarlet Witch” out?

By Jaedyn YoungSeptember 12, 2022No Comments

Marvel hit us with the long-awaited sequel “Doctor Strange in the Multiverse of Madness” which was madness in another kind of way.

The movie officially released in the U.S. on May 6, but it was supposed to come out much sooner than that.

“Doctor Strange” was scheduled for film production in March 2020, but was postponed until November 2020 because of the COVID-19 pandemic. Once filming began in the UK, it was halted again due to increasing COVID-19 cases in the country.

Maybe all the stops in production caused the mess of this movie.

Now before any Marvel fans launch into attack mode, the movie was still a wonderful watch. It had action, life or death moments, new universes and, of course, one sassy Stephen Strange.

However, everything kept moving at warp speed with new characters and old ones colliding in only two hours of time. It was a lot to comprehend.

Let’s dive into the specific details.

The opening scene was the first bundle of confusion. Doctor Stephen Strange, played by Benedict Cumberbatch, had a ponytail and was in a strange, mystical place with a young girl — when did Strange get a ponytail? The girl as we find out is America Chavez, played by Xochitl Gomez.

The two are fighting a weird octopus/cyclops creature, trying to get a white glowing book in the middle of this odd place. The audience discovers later it was the Book of Vishanti that they were trying to capture, which is the antithesis of the evil Darkhold — a book full of evil spells. A little clarification earlier would’ve been nice.

All of a sudden Strange tries to sacrifice America to gain her powers and as a result, he dies out of the blue. It’s only ten minutes into the movie, and everyone is really confused.

Then we see America’s power in action. Her eyes glow white and a star-shaped portal opens behind her. Where has she been this whole time?

Boom, all of a sudden, the Doctor Strange we know — the one without the ponytail — is waking up from this very vivid dream of his own death with some random girl in it.

Now, Marvel loves to give fans the action-packed launch at the beginning, which definitely caught the attention of the viewers. However, with no explanation as to what just happened, it made it harder to keep track of.

Strange pulls up to his ex-lover’s, Christine’s, wedding looking all mopey, as usual. Christine, played by Rachel McAdams, and Strange have a sweet conversation about cutting ties to their past and all the things fans don’t want to hear as our “ship” crashes and burns. Cue the violins.

Fortunately, audience members are saved from some more sappy time as Strange calls his cloak and begins battling the octopus. Here’s a plot twist though — it’s the same monster from the portal and he seems to be after America.

After Doctor Strange and the beloved Wong — played by Benedict Wong — the Sorcerer Supreme of Earth take the monster down they all have a nice sit down conversation with America.

That’s when things start to get uncomfortable, and we’re still only fourteen minutes into the movie.

America tells Strange and Wong that every dream the people have is actually themselves in another universe — can someone say creepy?

America is also a multiverse traveler, but she doesn’t know how to use her power, which could explain why we’ve never heard of her before.

Then we’re introduced to the dead alternate universe Strange and it’s not a pretty sight for the ponytail sorcerer. But how did he get here? Who exactly is after America?

When Strange and Wong discover that it’s a form of witchcraft that’s after America, our dear Wanda is the first suspect.

Now if you’ve seen “WandaVision,” you’d know Wanda fell off the wagon and started stirring things up with some wicked magic by her side.

She plays like she’s still a good guy on Strange’s team, but plot twist, that’s not Wanda. Wanda slips up and Strange sees her under the compulsion of the power the Darkhhold holds. Enter “The Scarlet Witch” and her evil plans. She’s here to get the potential life with her twin boys that other universe Wandas have. To do that, she needs to take America’s power.

Flash forward to Kamar-Taj, where of course there’s an epic battle of sorcerers versus the Scarlet Witch.

And to no surprise, the most powerful being to exist in multiple universes defeats Kamar-Taj with little to no effort. However, America, in fear of Wanda taking her power, creates a portal and escapes by universe jumping with Strange.

After a short talk, the true mission of the movie is revealed. Strange and America must go on the hunt to find Other Strange in order to find the Book of Vishanti — the mythical glowing white book at the beginning — to stop the Scarlet Witch.

But of course, we hit an obstacle. We meet our old friend Mordo, who still hates Strange. Mordo kidnaps the two and takes them to a lab to be studied. Of course, we find a not-so friendly researcher in the mix — Christine Palmer is here, studying the multiverse after the death of her Doctor Strange.

But who does she work for? Oh just the Illuminati, because that’s completely normal.

And guess who’s a part of the Illuminati? A female Captain America, who’s actually Agent Carter; Blackager Boltagard; Captain Marvel, who’s actually Maria Rambeau in this universe; and Reed Richards of the Fantastic Four. Finally, meet the group leader, Professor Charles Xavier,  the founder of X-Men. It’s an odd combination of members, but a fun little way to tie the Marvel universe into one pretty universe.

Meanwhile, as the Illuminati and Strange discuss their controversies and lack of trust with one another, the Scarlet Witch is simply that much closer to finding them.

Basically, it’s a really, really bad place for the evil Scarlet Witch to be at. Not to mention, there’s a giant statue of the potential Scarlet Witch in the background, to which Wanda remarks it as her throne for “dreamwalking”, which is walking through other universes through her dreams.

That’s how you know, things are about to hit the fan.

The Illuminati was way too cocky about their abilities to stop the Scarlet Witch, and their deaths marked how much they actually underestimated her.

Looking like a creepy mess, Wanda comes in with a trail of fire behind her and blood soaking her face and clothes. The whole image was like the bloody prom scene from “Carrie”.

First, the Witch takes out their most powerful hero, Blackager Boltagard, without moving a finger. After that, in a matter of four minutes, Wanda finishes off the Illuminati through her dreamwalking figure with little damage to herself.

Now do you believe Marvel when they say she’s probably the most powerful being in the universe?

Even when Professor Xavier tries to telepathically get inside the witch’s head, to pull Wanda out of the metaphorical rubble that her head has trapped her in — this really messes with the fans’ minds — the Scarlet Witch reclaims her control in Wanda’s head and literally breaks the professor’s neck.

It seems our little witch’s trauma has turned her into a literal serial killer.

Once they escape and open the door to the Book of Vishanti, Christine, America and Strange stand around all dramatically just staring at the book when they had plenty of time to pick it up before the Witch came through. Sometimes watching Marvel characters lolly-gag is so frustrating, but it seems to add to the dramatic effect

Regardless, the Scarlet Witch forces America to send Strange and Christine to another universe and Wanda ends up with America in the original universe at the Wundagore Mountain.

Doctor Strange meets another version of him that just happens to be evil and this movie falls into another mess of obstacles.

Did I mention this evil Strange has a third eye? And that the two battled with music sheet notes?

Regardless, Strange defeats evil Strange and gains control of the Darkhold and dreamwalks into the dead ponytail version that was buried at the beginning.

Now we have a combusting, zombie-like corpse with a ponytail, going after the big bad Scarlet Witch while being attacked by the Souls of the Damned for possessing a dead body. This is something Marvel fans never thought they’d see in action and it’s quite incredible.

Then our dear friend Wong re-emerges — the fans missed you for a minute there, Wong — and Stange comes in, defeating and arming himself with the Souls of the Damned, to which he says the iconic line: “This time it’s going to take more than killing me to kill me.”

That didn’t make a lot of sense, but it seems to have worked since he did keep the Witch contained for a while.

All of a sudden, a little speech and a creepy wink by zombie Strange allows America to see the confidence she’s had in herself to gain full control of her power. Talk about a cheesy finish.

America then uses her power to show the Scarlet Witch the fear her boys see in her evil side. Her sons cower away from her which makes her realize she is not the Wanda that her sons deserve. She claims to not be a monster, but that’s when she realizes to them, that’s exactly what she is now. It breaks Wanda’s heart to see she has nothing left to fight for, but alternate universe Wanda reminds the witch that her boys will be loved, even if she is not there to see it.

This part of the movie is where we really feel the extent of what Wanda has lost. Her character development from losing her brother, Vision and her sons and still finding the good in her to stop herself and let America go is a powerful scene to watch.

But there’s a sneaking suspicion in all the hearts of Marvel fans, that this won’t be the end for the Scarlet Witch. It feels like her new story has only just begun.

Of course after the action, we see another sappy goodbye with Strange and Christine, and for some reason it feels a little too final. Viewers also get a few more sappy goodbyes with America and Wong, and it feels like nothing crazy can happen in the end.

Then this universe’s Steven Strange develops a third eye at the very end — how did that even happen?

In the mid-credits end scene, we also get a glimpse of Clea, a sorceress and goddess from the Dark Dimension. For the Marvel fans who haven’t read the comics, she is a potential love interest of Stephen Strange, which means we’ll be seeing a lot more of her in the coming movies.

As a recap, the movie was pretty action-packed and made the comic-fans happy with the connections of other universes. Being able to see Captain Carver and the alternate version of Captain Marvel spiked quite a reaction for everyone interested in the movies, but the movie was still pretty hard to keep up with. The transition between moods of evil action and sappy emotions was enough to give the viewers whiplash throughout the movie.

Nonetheless, even though this movie felt very wishy-washy and messy, it created a good set-up for the expansion of the multiverse plot.

Too bad Stark isn’t here to make fun of Doctor Strange’s brand-new, creepy eye. The fans know Iron Man would have a lot to say about it.

Maybe it’ll happen in another universe. From what we learned about in this movie, there’s plenty of them to choose from.