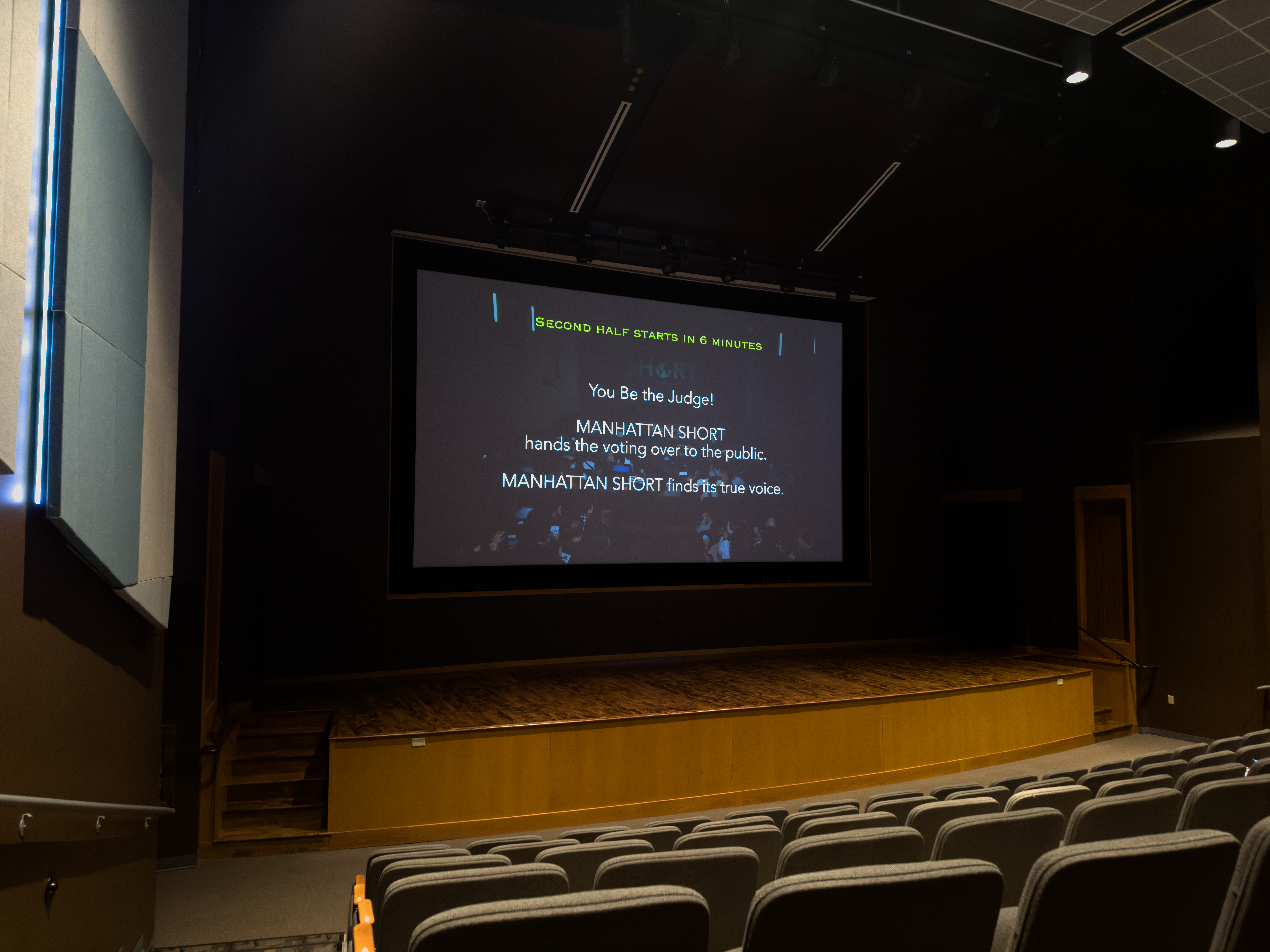 By Gabe KanaeNovember 1, 2022No Comments

On Sept. 29 at 7 p.m., around 60 people attended the 25th Manhattan Short Film Festival that took place in the Joe Crowley Student Union’s theater.

Tickets to the event cost $15 and were totally worth it for the price. The free popcorn and water provided was, in itself, enough to pay for the ticket.

When seated and once the event began, ten short films were presented on the screen split into two acts with a short intermission in between.

The sound and picture for the theater screen was masterfully set up and allowed full immersion into what each short offered.

In the first act, the United States presented “Save The Bees”, directed by Charlie Schwan with a runtime of 10 minutes and 50 seconds. This short presented a hooking plot with unique twists, turns and dark humor.

The second act introduced “Fetish”, directed by Rhian Williams with a runtime of 13 minutes. “Fetish” is a humorous take on a biracial affair’s date night and the morning after.

In the first act, France presented “Freefall”, directed by Emmanuel Tenenbaum, a 19-minute and 28 second short film inspired by the story of a stockbroker who bets on a market crash during the Sept. 11 attacks in 2001.

The second act introduced “The Big Green”, directed by Laurenzo Massoni with an 18-minute runtime that focuses on how a stranded character’s revived love for trees may be the very thing that saves her life.

In cooperation with Lebanon, France also introduced “Warsha”, directed by Dania Bdair with a 15-minute and 12-second runtime that focuses on how a construction worker would express himself if he didn’t have to worry about the opinions of others.

France also worked with Australia to present “Freedom Swimmer”, directed by Olivia Martin McGuire with a 15-minute runtime. This film visualizes a dangerous escape from China while keeping the narrator anonymous.

Finland presented the amazingly well done film “The Blanket”, directed by Teppo Airaksinen with a runtime close to 15 minutes. It follows a young girl who makes a dangerous supply run for her family during the start of the Winter war.

Czech Republic and Slovakia presented “Love, Dad”, directed by Diana Cam Van Nguyen with a 12-minute and 46 second runtime that focuses on the connection between a daughter and father and the flaws that lie within.

Scotland presented “Don vs Lightning”, directed by Big Red Button and had a runtime of 11 minutes and 30 seconds. This film is a masterfully created short filled with humor, character development and story.

Together, all these international films present a global eye and telling of literacy and media. Each with their own unique trope and engagement, all films managed to leave you with a different feeling than the last.

Manhattan Shorts provides a ballet and pen for attendees to vote for their favorite short film and actor. The winner will be chosen on Oct. 4.

Finalists also always get included on a DVD & Blu-ray combo that can be bought from their website.

This won’t be the last we hear of these films however because luckily, all of the films presented with Manhattan Short are eligible for the 2023 Oscars.