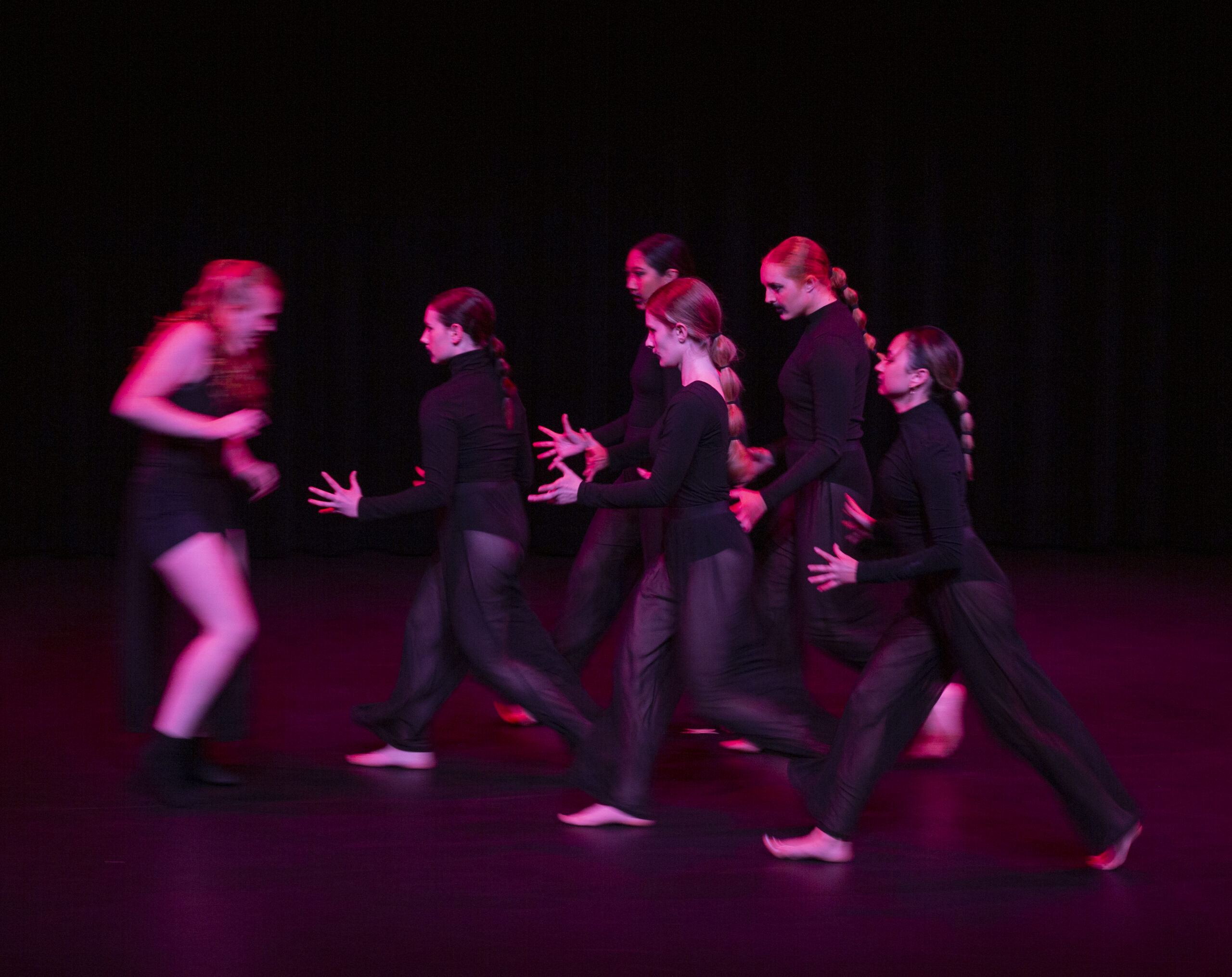 By Jaedyn YoungDecember 2, 2022No Comments

In the little Lombardo Recreation room, the University of Nevada, Reno’s Department of Theatre and Dance put on their annual Fall Dance Festival, this time in memory of the founder of the dance program, Kristen Avansino.

The show took place at various times on Nov. 16 through Nov. 18 and Nov. 20. On opening night, the show was sold out.

The production coordinator for the show, Eve Allen-Garza introduced the show with tears in her eyes. She announced its dedication to Avansino and a video was played for the audience to in memory of Avansino. The video contained old video clips and memories of Avansino, which showed the huge impact the founder made on UNR and all the students who valued her.

Soon after, the show began with an opening performance called “keep your hands, arms, feet, and legs inside the vehicle.”

This was a fun start that kept the beginning of the show light and goofy. It hooked the audience in almost immediately with its comedic display of a roller coaster simulation. The dancers added a little drama to their performance by acting with their expressions. The piece was choreographed by Emily Leech.

The six dancers, Kenneth Carter, Jasmine Johnson, Halie Landers, Noel Martin, Kiera Middlebrook and Maddy Regrut, did a great job of keeping the audience engaged and setting up a nice foundation for the remainder of the show.

“Pieces,” which followed right after, was quite an addicting performance to watch.

The movements by Marie-Louise Goerner, Alexa Patton and Samantha Sargent were all very harmonized and graceful. Even the colors of the costumes showed harmony and were all similar or the same, which kept with the piece’s theme.

The choreographer, Jenna Fortino — with contributions from the dancers — made it feel very in-sync and well-organized.

Followed by this act came “a slice of life” which was displayed on the big screen as a student-produced short video. The choreography was done by Shay Jordan with the dancers Madison Blea and Samantha Connolly.

This performance was a compilation looking at the positives and negatives of life. In the portrayal of a young person, the audience watched as the negative voice overcame the positive voice in their head and depression took over. Watching the ending unfold as the main character became happier and the clashing voices slowly joined together, made for a touching metaphorical display.

“Please wait…” was captivating right from the start.

The choreographer, Sarah Ziolkowski captured a display of anxious impatience with the three dancers’ — Kenneth Carter, Ayanna Compton and Anthony McMenamy — nervous fidgeting in their chairs. The sporadic bursts of anxiety under the bright, blue lights was enough to make the audience even fidget in their own seats.

“Trying” is the piece that stuck out substantially in the first half, a great lead-in before the intermission. The choreographer, Halie Landers used the soundtrack from the hit TV show “Euphoria” for the performance. Emily Leech, the main dancer in the performance did a beautiful job of expressing her emotions. She was being dominated by the other dancers who represented darkened souls in a way.

The other dancers, Kaelyn Baltazar, Samantha Connolly, Noel Martin, Kiera Middlebrook and Brynna Wayland kept their expressions neutral as they aggressively attacked Leech in her character. As the lights turn red and the dancing becomes more intense and angry, each of them maintain their composure and Leech does a great job of changing her emotions to be more angry, trying to break free from the captivation.

Watching Leech sob on the floor as the lights turn blue to mimic the sadness of the scene is surreal for the audience. They couldn’t remove their eyes from the scene when seeing the other dancers surround her again, somehow reclaiming her. This performance was powerful and completely engaging for the audience to feel the raw emotions that Leech felt.

After this phenomenal performance, the show took a brief 10-minute intermission.

The leading performance in the second half was “Les ténèbres,” which was choreographed by Andrew Paiz. The whole performance was quite unnerving and chaotic, with a constant dimming of the lights.

The dancers, Jasmine Johnson, Lucas Moir and Petra Warburton wore brown tank tops with black skirts and masks covering their dark eye makeup. The whole dance was elegantly created and very spooky to watch, something that the performers were able to capture perfectly.

“297 seconds per frame…” was the next piece choreographed by Jenna Emmons. The piece was very harmonized and represented a “like clockwork” type of performance.

The ticking of the clock and the fast-paced harmonization was interesting to watch. With the movements and plain costumes of green pants and brown shirts, it looked like the dancers — Ayanna Compton, Emily Leech, Andrew Paiz, Anthony McMenamy, Alyssa von Eberstein and Brynna Wayland — were part of an assembly line.

The next performance was “Waiting for the Call” an emotional portrayal on the video screen choreographed by Jasmine Johnson.

The main performer in the video was Kennedy Gaskins, surrounded by other dancers’ hands to represent the nerves of a performer waiting for a call. It was easily-understood and a good portrayal of what it’s like for performers during the big post-audition wait.

“Content(ion)” was the tenth performance of the night choreographed and danced by Kenneth Carter, Anthony McMenamy and Andrew Paiz. Watching this performance was impressive seeing the three dancers so in-sync and feeling the sadness, power and drama of the movements.

This dance is considered a “Work In Progress” since it’s being prepared for the American College Dance Association regional festival.

Finally, the show ended off with the “Pantsuited” performance choreographed by Rosie Trump. This piece just poured out power as eight female-presenting dancers came onto the stage dressed in blood-red pant suits, like soldiers. They started on the floor, moving diagonally in a line across the stage, completely harmonized in their movements.

From there, they each came together and portrayed a chaotic display of expressions, which caused a bit of a giggle from the audience. Then, as soon as the lights turned blue, one performer comes out in a white suit to sing very off-key.

“I sound shrill, intense and flat …I pity any girl who can sound like that unpleasant,” she screeched.

And then she finished off by asking the audience, “Should I have a choice?” and continuously repeated “Make it stop.” The message was a little unclear, but it was powerful nonetheless.

After the serious scene, the rest of the dancers come out in a more funky manner, doing disco dances in white pantsuits and giving a relaxed vibe to end the show off.

The audience was pleased as they applauded the finale of the dancers before they left the stage to finish the opening night performances.