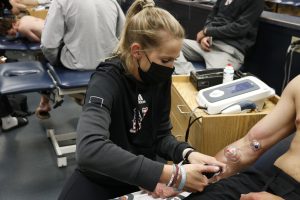 With three championships under their belt, the Nevada baseball team has always been a strong group of men. All of their hard work is shown on the field, but behind the scenes helping them is athletic trainer Victoria Rollins.

At a young and fresh 24 years old, Rollins describes herself as the “team mom” of the 39-man roster. She keeps the athletes healthy and tends to injuries, aches and sickness.

Rollins attends every practice and game — home and away. With no set hours she says it’s “basically all-day everyday.”

A typical day for her starts at early morning weight sessions. Rollins communicates with Will Clayton, the strength and conditioning coach, about injuries, restrictions and other medical information. She checks in on injured men and sometimes does a morning rehabilitation session for them.

More often than not, she ends up heading to her office to do paperwork.

“I document everything I do with the guys,” Rollins said. “Like if there’s an injury, I document it just like they do at a doctor’s office. Every single treatment that I do … I have to fill out a form about it. So when I see 20 to 30 guys a day, it quickly adds up.”

The most common treatments Rollins performs are soft tissue work, Graston modality, electrical modalities, ultrasounds, compression, stretching and cupping. The athletes usually ask her for a massage. In reality she is digging into and pushing out inflammation of a muscle.

The Graston technique is commonly known as scraping. A metal tool is used on the skin to force out muscle inflammation. Electrical modalities and ultrasounds bring new blood flow to an area. The compression boots are a favorite among athletes because it makes the men feel flushed out.

Cupping and stretching are also other techniques that show benefits for the players.

Aside from the hands-on work, she also schedules their doctors appointments, whether they deal with baseball or not. Since the men are all 18 or older, they legally are adults.

Rollins doesn’t have to get permission from the athlete’s parents, but sometimes the players ask her to call their parents to tell them what is going on. In some cases, the players tell Rollins to not disclose information to their questioning parents and she must comply with the federal law restricting release of medical information.

Another thing Rollins writes up are rehabilitation and injury reports. Currently, there are six players doing daily rehabs that she has to update day-by-day.

Around noon, Rollins heads down to the field to prepare for practice. She sets up the water and Gatorade for the team and checks on her injured players again. Rollins performs rehabilitation on certain athletes, and helps pitchers stretch before practice begins. Rollins also talks to every coach and updates them on the specific players they work with. For pitchers, she talks to pitching coach Troy Buckley, and she talks to head coach T.J. Bruce for positions.

During practice and games, it may seem like Rollins wouldn’t have much to do with the players since they are active. However, she keeps an eye on every little movement done by every player.

Even though Rollins has not had to take on any emergencies yet, she is prepped and ready for anything unexpected. Cuts and blisters are the common things she takes care of during play time, but heavier injuries are cared for after practices.

Some of the long-term and more serious injuries Rollins sees are rotator cuff strains and general elbow problems. These two body parts get overworked and exhausted throughout years of playing baseball. Strengthening the muscles around the joints is the most common way to care for the injuries.

One of the toughest injuries Rollins has dealt with at Nevada is Tommy John — a complete ulnar collateral ligament. Two men on the team have had surgery for already.

The recovery is long and difficult — mentally, physically and emotionally. The hardest part for the athlete is having to learn how to throw a ball again. Stress from the injury on top of being a college athlete wears them down mentally.

Rollins is there for the players through the whole process. The men contact her at any time of the day, sometimes even 3 a.m. She is their first line to anything, medical or not, going on.

On their best days and worst days, Rollins is there for the team. She appreciates how great the men are on and off the field.

“I think I have the best team on campus, and I’ll say that with no shame,” Rollins said.

While Rollins may get notifications from the players when she is at home, she tries to build a separation between her personal life and work. It was hard for her to find a work-life balance when she first started and would stay until 8 p.m. on most nights.

Her goal now is to try and leave by 6 p.m. and not bring work home with her. The players contacting her doesn’t bother her that much because she is glad to know they feel open to communicate with her.

The opportunity for Rollins to work at Nevada arose when her now boss and Arkansas alumni, Spencer Hiett, secured a job at Nevada. She saw how successful the teams and athletic program was and wanted to push herself and apply.

Rollins started her Wolf Pack journey in August 2021. The administration had to decide after the interview if they wanted her as an athletic trainer in volleyball, softball or baseball. Based on her personality and knowledge, baseball was the team she was assigned to.

In her college years, Rollins did not take a straight path to becoming an athletic trainer. She came from Little Rock, Arkansas where she got her bachelor’s degree in Health and Wellness Science at Arkansas Tech.

“So when I started out pre-med, I wanted to go to sports medicine because I enjoy sports,” Rollins said. “I enjoy being around the environment. And obviously I enjoy medicine. Gosh, I mean, probably high school was when I started getting really interested in it.

Rollins hard work always goes appreciated with the players and she hopes to stay at the collegiate level for a while.