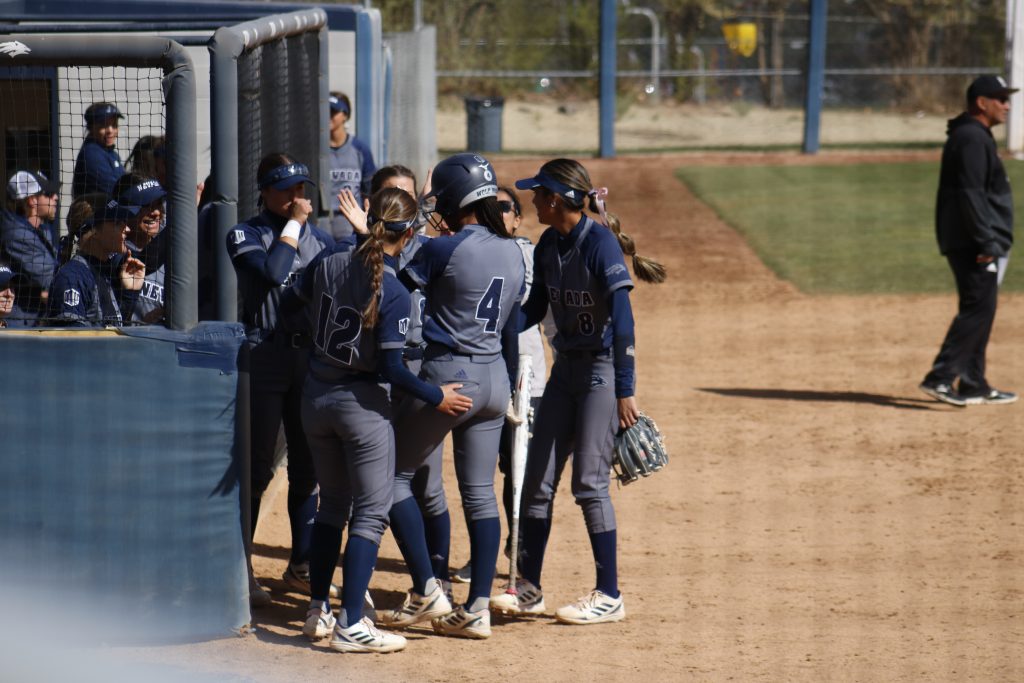 Touched the butt: Why athletes tap each other’s tush

A touch. A little slap. A hand resting on the top shelf.

No matter what sport you watch, men’s or women’s, they all have one thing in common — teammates touching each other’s butts.

Volleyball girls in a huddle? Hands resting on the rump. Baseball player strikes out? Slap on the cheeks on the way back to the dugout. Basketball player falls? Teammates help them up with an added touch of the back end.

You don’t see teammates giving each other long and firm handshakes during a game because that takes too long. Instead, they do a quick action like hitting a player’s glutes, a high five or pat on the back.

The chemistry between these players is so high that physical touch turns into a way of communication.

“A huge part of sport performances is the ability to work effectively with each other … and respond to both verbal and nonverbal cues,” said Patrick Smith, who is finishing up his Ph.D. in behavior analysis. “As a coach, or as a team, you want to get to a point where your players are interacting in a manner where you don’t have to explicitly say everything, and they’re still moving almost as if they’re a single organism.”

To operate as a single organism, teammates must share the same goals of and performance level.

Putting the top five basketball players of all time on one team doesn’t mean the team will be good; the players need to synergize with their skill sets and on an emotional level.

“Not feeling connected with their team is certainly going to make them decrease their performance,” said Lisa Widmark, a performance coach with a master’s in sports psychology.

Touching the tush of a teammate can increase trust in each other. A player having more trust in the people who are on the field with them leads to better performance.

Any amount of physical contact between players helps with ”increasing all those feelings of oneness culture.’”

There are different ways that players go about touching booties.

First is resting a hand on the butt. This is usually done when teams are in huddles. Huddles are a place where connection and focus are mandatory. The physical touch of teammates at this time helps everyone feel comfortable and included.

“I noticed – mostly in the last Summer Olympics – a lot of the volleyball teams now after every point, everyone comes together and just touches,” Widmark said. “That’s about, you know, ‘you did great that play,’ or ‘you screwed up that play,’ and ‘we’re all still a team.’”

Next is a slap on the fanny. This is seen when players are actively moving in game time. They don’t have the time to rest their hand on their teammates’ bottom. It is a quick way of telling the player that they have done something for the team –  good or bad.

“It is a totally open hand, pat on the butt,” Widmark said. “It’s not ‘I’m grabbing your butt.’ The players already have a relationship. So, it’s not something that someone from the outside could just come in and do. You already trust this person, and you already have a connection with them.”

The tight-knit relationship that a team has did not always include butt touching in the past. It is a relatively new concept seen in sports in the past 30 to 40 years. Before, it used to be high fives, fist bumps and handshakes. Players are still performing these, but they serve a different meaning than bottom touching.

When basketball players are being announced before game time, it is common to see the player go to the teammate at the end of the huddle and do a handshake. This handshake is unique because they practice it many times. The same thing goes for football players when they get a touchdown. Certain teammates and certain positions have handshakes unique to them. These more involved ways of physical contact are a reward, as opposed to a simple touch of the butt.

“That’s our congratulations that we practice,” Widmark said. “We practice this play, we practice these moves and they were successful. And now we get to do our happy dance …  that has a different meaning than just another player walking by and patting you on the butt.”

Handshakes take more time than a slap of the butt. In the middle of a game, players still need to find a way to connect with each other to reach their goal. The quick touch of the behind can do just that.

Butt touching is a part of sports culture now. It is a way in which players communicate, build trust with their team and potentially even perform better.

“The underlying function of fluency and comfort is something that can be really, really meaningful in a competition’s high pressure kind of setting,” Smith said.