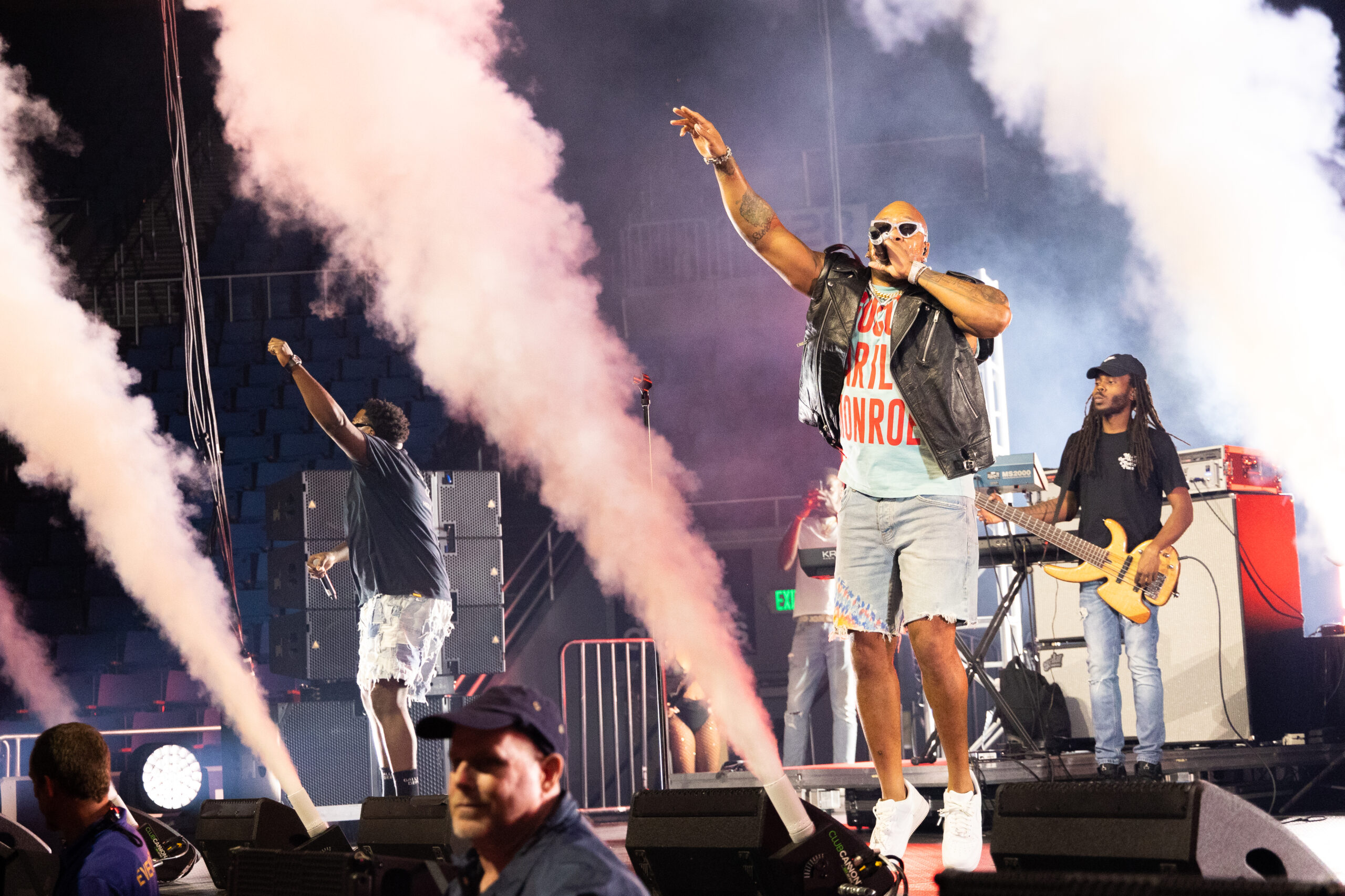 By Jaedyn YoungSeptember 9, 2022No Comments

Approximately 5,000 attendees from the Nevada System of Higher Education had their “apple bottom jeans, boots with the fur” on at the 2022 Welcome Week Concert that was planned to feature Flo Rida and Yung Joc on Sept. 2.

Or at least it was supposed to.

While Flo Rida was rocking the stage, students were left puzzled as rapper Yung Joc was not in attendance.

“The reason Yung Joc was not in attendance was because unforeseen circumstances prevented him from being able to travel to Reno,” said Maria Zamudio, the Director of Programming for ASUN.

ASUN always puts on a great show for NSHE folks at the Lawlor Events Center to start off the year right – even though, unfortunately, the night didn’t go as planned.

Everything ran relatively smoothly throughout the week. Students rushed to the Wolf Pack store in the Joe Crowley Student Union to buy their tickets for the concert right after Flo Rida was introduced as the headliner, featuring Yung Joc. Tickets were $25 if purchased early and $35 at the door of the event.

Originally, doors were planned to open at 6 p.m., and the concert was expected to start at 7 p.m.

At 4:21 p.m. on the day of the concert, a text was sent out through the university event update chain, saying “Doors now open at 7 p.m.”

Pushing the concert open time back an hour wasn’t too bad, but things just went downhill from there.

For anyone watching, lines wrapped around Lawlor and ran on the sidewalks along the roundabout by the Identity and Park Place Apartments. Eventually, the lines even extended all the way through the West Stadium Parking Garage.

However, for those who didn’t know, that line was explicitly for floor spots, since the first 1700 students in line got the chance to be on the floor and not in the stadium seats.

Students who didn’t want to wait in the long lines had the option to walk up the stairs of Lawlor to get stadium seating. In the early minutes of opening, there was no line going up the stairs outside – there seemed to be a lack of communication on the entrance options.

As things began to unfold and the stadium became more filled, the concert eventually started around 8 p.m.

Noah Klein, local DJ and member of the fraternity Sigma Phi Epsilon, opened for Flo Rida. Klein has performed at many local hotspots, including many bars like The Stick, Little Waldorf Saloon and 1up.

The opener was quite an entertaining one, mixing some popular hits that the students seemed to enjoy. However, it became clear that the audience started to get bored and were waiting for Yung Joc and Flo Rida to get on stage.

Finally, around 9 p.m. when Klein said his goodbyes, students began chanting Flo Rida. And of course, Flo Rida came out already rocking the show with a big entrance. But where was Yung Joc?

On stage with him, Flo Rida had Int’l Nephew and VarieFresh singing as his back-up vocals and hype men. The rappers did a great job keeping the audience entertained with his backup dancers and hype men, but it didn’t stop the gossip about Yung Joc’s whereabouts.

Regardless, Flo Rida still made the best of this concert.

There seemed to be some audio issues with the concert though, as it had been last year with T-Pain and Sage the Gemini.

A lot of students didn’t know who the performers around him were because they couldn’t hear what the artist was saying. However, in a room full of students screaming lyrics and talking amongst themselves, there’s bound to be some hearing issues.

Luckily, everyone could still make out the songs, and everyone was able to sing along with Flo Rida.

The artist also brought an extra artist, Oya Baby, to perform some hit songs she made — including “Ride The Stick” — which definitely kept the audience entertained, despite the audio issues that occasionally distracted the fans.

At this point it seems the crowd was thinking “Yung Joc, who?”

Flo Rida also performed many of his hit songs throughout the night including “Low”, “My House”, “Wild Ones,” “Whistle” and “Where Them Girls At.”

Not only did he give the crowd his entire effort, but he was also very involved with the students — more so than other performers.

Flo Rida brought a large group of people separately on stage to dance with him and his team through a few of the songs.

Later, he had his team pick a few girls from the crowd to come up on stage and introduce themselves to their peers before they danced and sang together to another song of his.

He threw roses to fans in the audience, crowd surfed in the front by his fans on the floor, put on a custom-made Wolf Pack jersey that said his name on the back and played around with his lyrics to add Wolf Pack and UNR in them. The artist even had the crowd sing “Happy Birthday” to one student during the middle of the show.

At one point, he even had his bodyguard carry him to the front crowd in the seats section to the right of the stage.

He hopped over the railing, with fans jumping and singing beside him. Everyone was excited to be this close to a star performer.

One girl, Sophie Mastrangioli, stood right next to Flo Rida, when he put his arm around her and grabbed her glasses to put them on. Then he hovered the mic in front of her to let her sing along to the song with him.

After the artist jumped back down Mastrangioli was freaking out, shocked about what just happened.

“I literally can’t breathe,” Mastrangioli said with a smile. “He wore my sunglasses!”

This young student isn’t the only one who will forever remember this concert. Flo Rida made a mark on every student who went on stage, every student he sang with in the crowd, every student that received a rose and more.

At the end of the concert, Flo Rida also signed and passed out both of his white Air Forces, as well as his Nevada jersey for someone to keep.

Even though fans missed out on seeing Yung Joc perform, it was still a memorable opening concert for the year that many students enjoyed.

Now students just have to cross their fingers and hope for a great headliner next year — and a featured performer who shows up.

However, Flo Rida’s performance is definitely going to be a hard one to top.