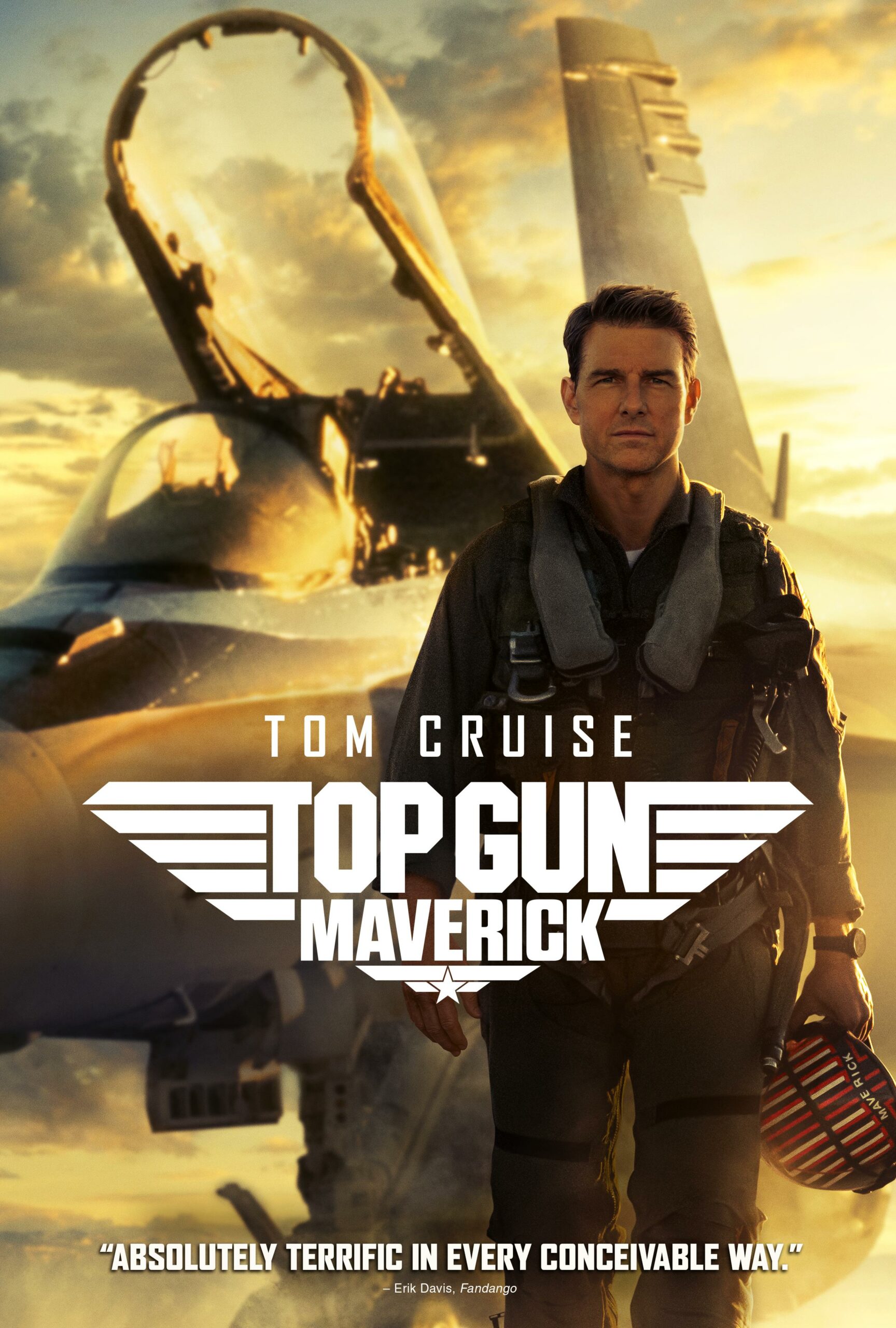 By Jaedyn YoungSeptember 14, 2022No Comments

If none of you know what the movie “Top Gun” is about, here’s a quick summary: shovel some older attractive actresses and actors together, put them in lieutenant pilot outfits, have them fly a couple of dangerous missions and watch them give their instructors some sassy attitude.

Alright, so there is a little more to it, but think of an action movie with a dab of drama and a smidge of romance and you have the “Top Gun” movies in a nutshell.

Nonetheless, the time has come to see our dear Pete “Maverick” Mitchell, played by Tom Cruise, back on the big screen in that legendary leather jacket — it still fits! — and the accompanying bad-boy motorcycle.

As the original “Top Gun” fans remember though, this movie unfortunately won’t have the clown favorite, Anthony Edwards who played Nick “Goose” Bradshaw.

For those who don’t know what happened to Goose, long story short, he died in an unfortunate training accident flying with Maverick in the first movie. Goose was not only Maverick’s wingman and best friend, but he was also a big fan-favorite and his name is brought up quite often in the sequel. Everyone misses your “Great Balls of Fire” rendition, Goose.

It’s recommended that you watch the first movie since there are little Easter eggs and references to the original that only “Top Gun” fans will get when watching the sequel. However, you can still understand the basic plot of the movie without any background, but why wouldn’t you want to watch the first one? It was pretty awesome.

Now let’s take a jump into the basic plot of the movie.

And like always, everyone’s favorite pilot is still up to no good.

Even though Maverick has plenty of honors and good things to say to his name, his  constant need to never follow orders kept him from a flag rank.

Now, Maverick works for a program to fund drones called “Darkstar.” At the very beginning of the movie, we get a glimpse of the pilot working and having the time of his life.

Unfortunately, Rear Admiral Chester “Hammer” Cain calls Maverick telling him to shut the program down. Of course, this isn’t the first time Maverick has refused to follow orders and it won’t be the last.

Maverick jumps the gun in the flight plan and decides to push the aircraft into high-hypersonic speed. And of course, the pilot hits Mach 10. The build-up of tension made fans go wild, missing the old action from the first movie in just the opening scene.

No one in real life has ever gone Mach 10 in an aircraft while staying in the atmosphere.

Then Maverick – of course – becomes a little reckless and ends up destroying the aircraft when he continues to fly beyond Mach 10.

Luckily, Maverick is saved from being chewed out. Admiral Tom “Iceman” Kazansky, now the commander of the U.S. Pacific Fleet saves Maverick from being completely kicked out or forced into retirement.

Fans remember how Iceman used to be – a cocky overachiever who didn’t get along well with Mav — in the original. But now the two seem to be pretty chummy and got close after the death of their shared friend, Goose.

In the new movie, Iceman is still played by Val Kilmer, but now he’s older and has an extensive family with a big house.

He also, unfortunately, has an advanced case of cancer.

Later in the movie, Iceman dies from his cancer and it really pushes Maverick to put his life back into perspective. The movie scene was raw and emotional and a powerful push for fans to feel the pain they originally felt in the first movie when losing a fan-favorite.

After Iceman saves Maverick’s career — again — by sending him to train members of the navy for an almost impossible mission. Of course, the movie has to have some real drama involved in it.

The point of the mission is to blow up a uranium enrichment plant, which is defended by SA-3 Goa surface-to-air missiles, GPS jammers and fifth-generation Sukhoi Su-57 fighters.

For the fans who aren’t too keyed into aircraft and military weapons, this just means it’s going to take a lot of training and a big risk.

However, Maverick is not just training any members of the Navy. There’s been an elite group of TOPGUN graduates that will be trained.

And among them is the one and only, Lieutenant Bradley “Rooster” Bradshaw, played by Miles Teller.

If you remember from the first movie, Goose and his wife, Carole Bradshaw – played by Meg Ryan – had a sweet, little boy who always looked up to his dad.

Well now, Rooster followed in his father’s footsteps and made his way into the danger zone. And the two actors conveniently look a lot like one another, making them really look like father and son.

However, Maverick and Rooster have some beef from behind the scenes of those missing 30 years. Maverick blocked Rooster’s application to the naval academy trying to protect him, which only set Rooster back in his career. All that did though was force Rooster to harbor resentment against his dad’s best friend.

Before we meet the other pilots though, we get another little flashback to a woman who was merely mentioned in the first movie.

Remember the scene at the beginning when Commander Tom “Stinger” Jardian, played by James Tolkan, tells Goose and Maverick they’ll be going to the TOPGUN?

Well in the beginning of the scene of the movie, Stinger reprimanded Maverick and Goose for saving a friend in the airfield – after being told to land the plane. He then goes on to list a bunch of Maverick’s wrongdoings, including hooking up with an admiral’s daughter.

Well if you missed that little tidbit, it would be a good thing to go back and rewatch it because in “Top Gun: Maverick” we finally get a Penny Benjamin reveal.

And Penny and Mav have some serious sexual tension in this movie.

Penny, played by Jennifer Connelly, works at a local bar in the area when Maverick arrives in town and just based on a few scenes alone, the audience knows there is some romance between these two old lovers now that Penny is a divorcee with one 13-year-old daughter.

However, the real highlight of the movie is the cast.

These characters include Natasha “Phoenix” Trace, played by Monica Barbaro; Robert “Bob” Floyd, played by Lewis Pullman; Jake Seresin, played by Glen Powell; Reuben “Payback” Fitch played by Jay Ellis; Mickey “Fanboy” Garcia, played by Danny Ramirez. The rest of the lieutenants act as supporting characters and don’t get a lot of lines in the movie.

Long story short, after a long time of training for all of these pilots, fans see plenty of tension between Rooster and Maverick, as well as some teamwork issues with the other pilots.

Fortunately, the fans get to watch a nice team-building football game where they actually see the characters bond — and some sweaty, attractive actors playing a dirty game of football on the beach. It was a pleasant remake of the volleyball game played by the pilots in the first movie.

However, team bonding only goes so far when you can’t complete an impossible mission.

After many failures and one really bad training accident, Vice Admiral Beau “Cyclone” Simpson, played by Jon Hamm, pulls Maverick out of the commanding position to train the pilots. With Iceman gone, there’s nothing else Mav can do to get out of his forced retirement now.

But then, Maverick literally does the impossible. He shows the admiral and the lieutenants that the course is possible and escapable.

Cyclone then has no choice but to bring the brilliant pilot back as the head of the mission.

The team takes four aircraft out on the mission. Maverick leads Bob and Phoenix on the first strike deal and Roose leads Payback and Fanboy on the second strike deal.

Hangman is really sad to see Rooster take his spot on the mission and not even be included in the hero’s journey. However, he’ll play his part. These movies are cliché enough to pretty much predict some of the end results.

However, the actual outcome of the mission was pretty hard for fans to pinpoint when there was a new obstacle and a bundle of challenges at every minute of the movie.

The teams destroyed the plant but Rooster gets caught by his neck in the action, so Maverick sacrifices his jet to protect him. Goose would’ve been proud.

Everyone thought Mav was dead, but Rooster knew he couldn’t leave a man behind.

The young pilot finds Mav and saves him from being killed. Then the two get together and steal an older plane, an F-14 Tomcat from the base they just destroyed.

During their escape, Maverick and Rooster get stuck in a sticky situation again, in the air this time, on the verge of death. Maverick feels immediate regret for letting Goose down when Rooster’s seat doesn’t eject for him to escape. The moment of silence was loud and fans were holding their breath as we waited for the deathly blow to take Maverick and Rooster out.

Then of course, Hangman finally gets to play his big hero part and shoots down the aircraft that had a hold on Maverick and Rooster.

From there we get a sappy scene of Rooster and Maverick kissing and making up and they find a connection in their work on Maverick’s P-51 Mustang aircraft.

We also see a nice glimpse of Penny and Maverick together at the end, literally flying into the sunset — that was probably a little too sappy, director Joseph Kosinski. But it won the fans over.

The movie had excellent reviews, scoring a 96 percent on “Rotten Tomatoes” and an 8.5 out of 10 on IMDB. It seems everyone was excited about this sequel and the cast it had attached to it.

One thing a lot of fans were looking for in this movie was to see more of the old characters like Kelly McGillis who played Charlotte “Charlie” Blackwood. Fans really wanted to see Commander Mike “Viper” Metcalf, played by Tom Skerritt, in the new movie.

Unfortunately, we don’t get a glimpse of the legendary flier or any of the other old characters. However, the new generation of fighter pilots gave us enough entertainment to keep us going with this sequel.

Maybe we’ll see Viper in the next one if he’s around for the next 30 years.