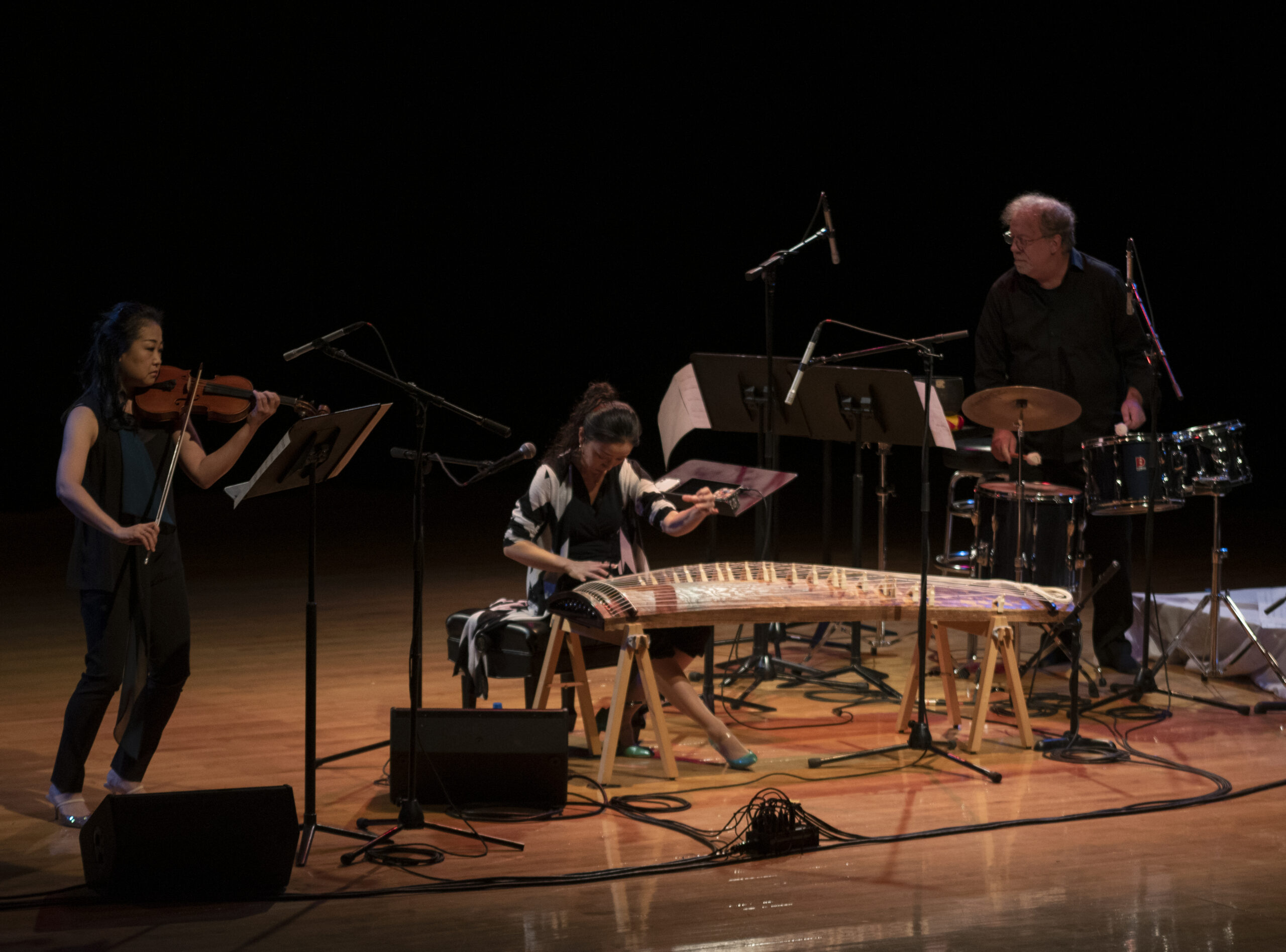 By Jaedyn YoungNovember 10, 2022No Comments

One thing to know before you read more is exactly what a koto is.

Yumi Kurosawa is a world-renowned koto player and composer, so her skills on this koto are phenomenal to watch and listen to.

For those who don’t know what a koto is, it’s the national instrument of Japan. In description, it’s a long Japanese board zither that has 13 silk strings and movable bridges. It’s an instrument that must be tuned with every new piece of music.

Now that you know, it looks like an extremely difficult instrument to play, something Kurosawa is able to master beautifully in her performance at the University of Nevada, Reno’s Nightingale Concert Hall with her partners, Naho Parrini on the violin and Eric Phinney on the percussion instruments.

Before the show began, Shoshana Zeldner, UNR’s Program Manager of Special Events who runs the Performing Arts Series, thanked a few of the series’ sponsors before she introduced the trio to the stage.

Then, the show was on.

The trio started playing immediately, where they immediately found themselves in sync with each other. If the violin had a sadder tone, the percussion and koto would follow through. If there was an emotional build-up of tension, each of the instruments contributed to the feeling one way or another. Not to mention, watching Kurosawa strum across the koto was quite interesting to watch.

After their initial hooking song, Kurosawa introduced the trio and talked a bit about the concept of the first song and what the rest of the night’s agenda was going to look like for their performance.

The calm transition between song one and two was smooth and kept the audience’s attention reeled in before she led into the next song called “JB Transfer.” Before the performance of the third song, she mentioned she would add an electronic component to the piece as well.

Kurosawa told the audience that it was a life-painting type of theme that would explore the past of tradition and the present and future as well. It was a piece she claimed was originally from an artist in the 17th century.

This song started off as a koto solo but then carried into a combination of the violin and percussion, which allowed for a more steady beat and comfortable tone to set in.

The next song was a violin and koto duo, giving Phinney a little break with his fingers. Kurosawa explained the piece had a theme that said “no matter what’s going on, we have to appreciate what we have.”

The piece started off very graceful with a tense build-up. The harmony between the violin and the koto, as well as Kurosawa and Parrini, was wonderful to watch. It was like their every thought and musical feeling was in-sync throughout the entire song.

Phinney and Parrini swapped positions, and Phinney and Kurosawa took on a duet performance where Phinney focused on playing his tabla.

This piece had a faster and steadier rhythm  with a deeper and darker tone. Watching Phinney move his fingers on the tabla rapidly was quite an impressive skill to witness, especially during his middle solo when Kurosawa and Parrini were just watching him smiling and nodding their heads along to his steady beat and fast pace.

Finally, when the koto fell back into the song, they matched each other’s rhythm perfectly and there was no fall-out as they regained their musical tone.

And then, they brought the audience in on it.

Kurosawa indicated for the audience to join in the steady beats with their claps, starting at a rhythm of two at a time, then down to one and ceasing.

Watching the audience interact and get engaged with the performers while the performers smiled and encouraged them was quite a sight to see. This moment was something all Performing Arts Series fans will definitely remember after the attendance of the Kurosawa Trio.

After this pleasing performance, the trio moved into a song of “passion” according to Kurosawa. The piece is a shorter, faster-paced song that has a sort of ominous feeling to it.

Kurosawa then performed a koto solo which she says was her first composed piece ever. Watching her tune it and play it so gracefully and gently, is like she’s literally plucking your heartstrings right in front of you.

The trio then played the song “Journey”. When discussing the theme of this piece, Kurosawa said she “created the music for … the journey.”

That earned quite a laugh from the crowd.

In the end, she said the goal was to provide a journey that would allow the audience to feel the change of scenery between people and cultures that she did on her tour through South America.

The song was much more uplifting than the others and had a more positive, hopeful tone that slow-drifted into a calming ending.

In the last song of the night they played a piece that was themed to be based on the representation of the Japanese cultural annual event called “Obon” where they welcome and say their goodbyes to their ancestors.

It started off very calming and then picked up. Audience members were bobbing their heads to the beat and getting really into the vibe of the song. Even the musicians looked to one another for support and clarity, making sure they achieved the same harmony and kept up the rhythm together.

Kurosawa also announced that the trio was leaving for New York just the next day to create their first CD with all of their instruments included.

After they finished their speech and were getting ready to leave the stage, the entire audience gave the trio a standing ovation. The trio also offered to meet with fans after the performance.

Overall, their interaction and willingness to speak and hear the thoughts of their fans and audience made the performance even more phenomenal than just with the music.

Jaedyn can be reached at jaedynyoung@sagebrush.unr.edu or on Twitter @jaedyn_young3.