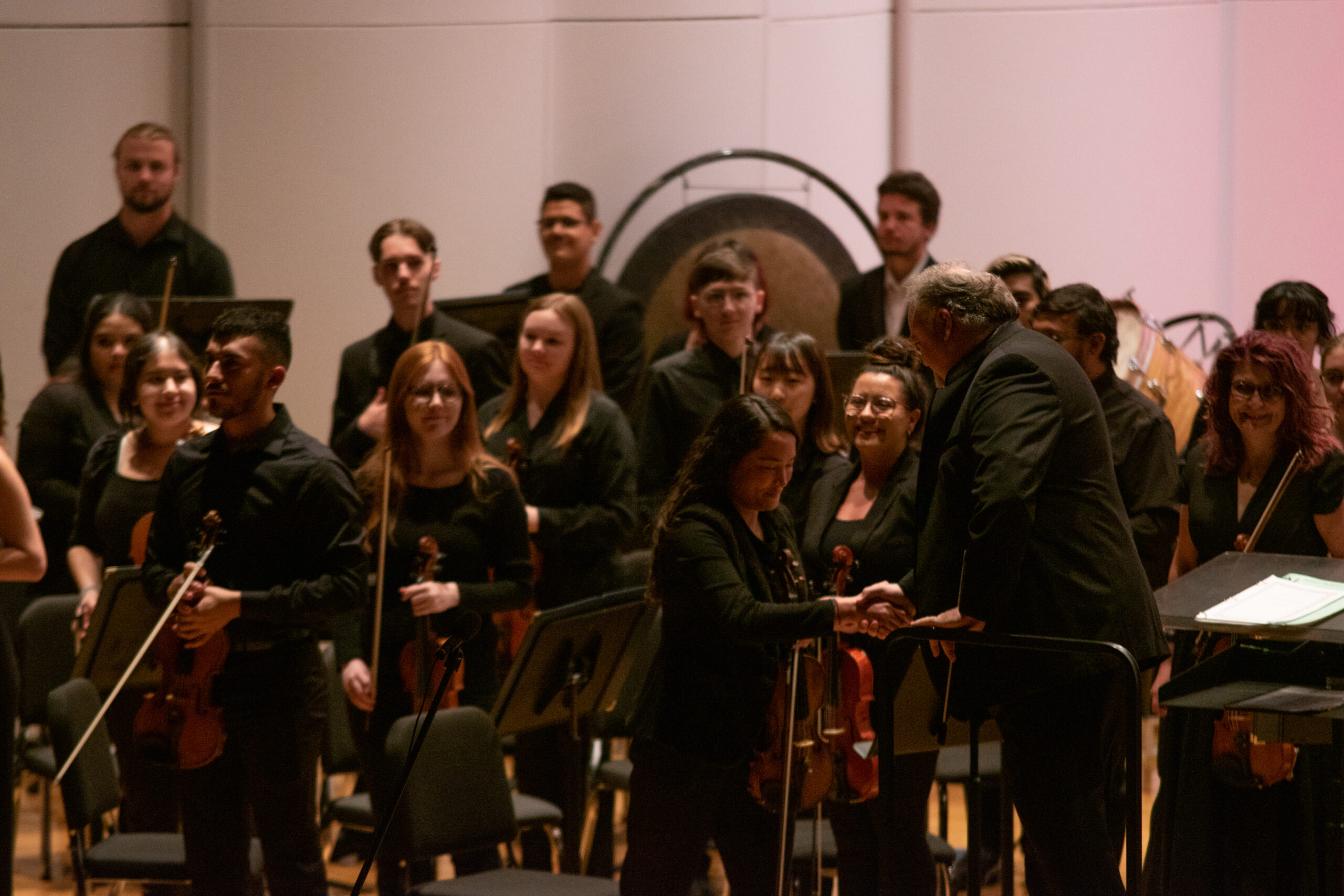 By Jaedyn YoungNovember 10, 2022No Comments

The University of Nevada, Reno’s own Jason Altieri, Reno’s Director of Orchestras, was one of the conductors who led the UNR symphony orchestra through another phenomenal concert. The Oct. 4 concert started UNR’s fall season off with a bang.

In three collections of music, the last one consisting of four separate divisions of song, the orchestra gave the Nightingale Concert Hall a night to remember with their soothing tones and brilliant harmony.

Starting the night off, conductor JoAnna Cochenet, a graduate assistant conductor, took the stage to lead off with the first piece, “The Sea Hawk,” which was composed by Erich Korngold and arranged by Jerry Brubaker.

This piece was a great attention grabber for the symphony orchestra to start off with. It had a dramatic introduction that the musicians all kept up with very well and stayed in-sync throughout the entire piece.

When audience members got to hear the percussion and deep instruments let off and  the strings play, the sudden but engaging tone shift was very well-done and allowed a nice lead in for the big finish.

After this piece was played, Altieri took the stage and conducted for the remainder of the night.

For the second piece of the night, the symphony orchestra played “Irish Rhapsody” composed by Victor Herbert. This may have just been the best piece of the night. It had a racy start that halted to a calm mellow performance with soft strings. Not to mention, the majestic playing of the harp was enough to send off an array of chills through the air.

However, the best part of the entire performance was definitely the conductor, Altieri, getting into the music just as much as his musicians. He did little dances with his feet and moved with his whole body to the rhythm, which definitely lightened up the audience and kept things entertaining on top of the great musical performance.

During this piece, we also saw three soloists playing a cello, a viola and an oboe. Each of the three individuals played wonderfully in their solos throughout the piece. They were applauded individually by the audience after, as well.

In the final collection, Altieri led the symphony orchestra through “Symphony No. 5 in C minor”, which was originally composed by Ludwig van Beethoven.

And with Beethoven, you know these performances were going to be good.

The symphony led us through “Allegro con brio” which was a classic, recognizable piece, one of Beethoven’s pieces he often first gets associated with. It’s dramatic, iconic and carries a nice flow that the musicians performed wonderfully.

The next was “Andante con moto” which had very distinct tone shifts, from calming to more pronounced notes.

“Scherzo: Allegro” had quieter and continuous pauses in . There was a lot of plucking on the violas and violins, which caused for an inconsistent music flow, but somehow it worked with the tone of the piece.

Finally, “Allegro – Presto” was a good way to end off the show with this climbing ending. This piece had a violent and abrupt way to its notes.

In the end, the symphony orchestra performed all of the pieces wonderfully, keeping in-sync with one another through each new tone and managing to stay in-tuned with their conductor and the minds of those around them.