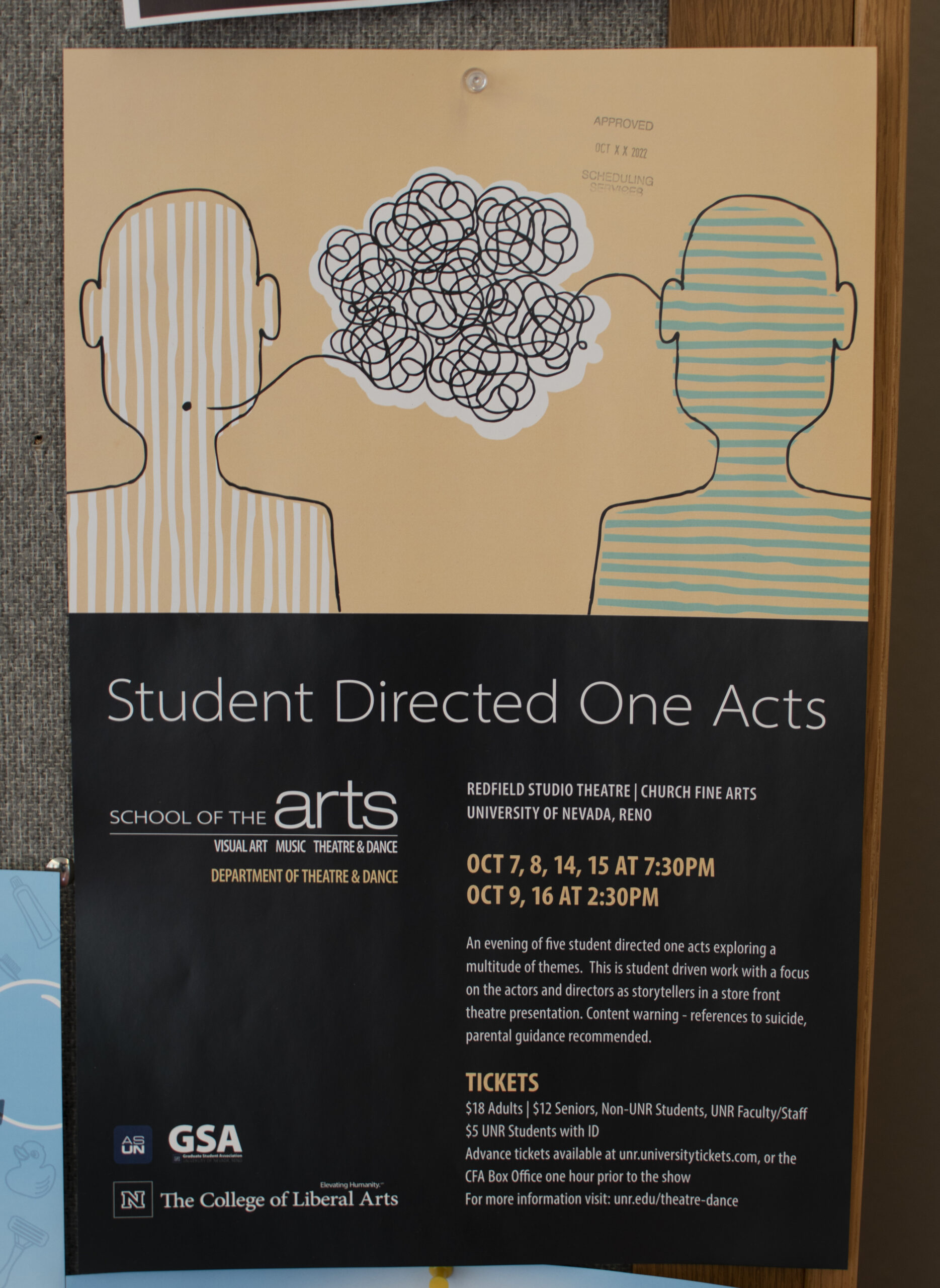 Fall One-Acts make do splendidly, with way too little

By Peregrine HartNovember 11, 2022No Comments

This year, the Department of Theatre and Dance mounted a showcase of student-directed one act plays with none of the usual suspects.

“Our productions this season will all focus on the performative aspect of artistic creation with minimal design and staging elements,” the Playbill for the production read. “Through retirements and departures, we currently find ourselves without the capacity to provide the elements of spectacle in the critical areas of scenery, lighting, and sound.”

Mike Fernbach was one of the retirees that came at a great loss to the theater department for all the hard work he did for their productions.

That’s no joke. The showcase’s second night on Oct. 8 opened with the same announcement, delivered by actors in the production holding signs on poster boards. The audience in the Nell J. Redfield Studio Theatre fell to murmurs of intrigue upon learning of the strange circumstances facing the Department of Theatre and Dance.

The announcement ended with a call for donations. Between this and the start of the show, the house lights did not ever dim.

The fact of the Department of Theatre and Dance lacking the resources and faculty to which it is entitled aside, it achieved a great deal in using this stripped-down mode of performance to its advantage.

The short, small cast affair of a one-act play lends itself readily to the intimacy of a no-budget production. And much of the suspension of disbelief you lose without technical elements can be restored with the conviction of a great, committed group of actors asking you plainly to believe in their story.

If it wasn’t clear: they all deserve better from the university, but the casts and directors of these one acts shone nonetheless.

The showcase on Oct. 8 opened with a zany, multilayered comedy under the direction of Brie Albright. “The Rotary Phone,” with a script by Andrew Martineau, looked toward a disarmingly funny pastiche of a prophetically dark future. The leading trio – played with aplomb by Elliot Dungan, Crystal Holmes and Leif Aucoin – were digging through heirlooms when they uncovered  an archaic rotary phone.

They toyed with it for a while, as we learned through idle conversation how bleak and corporate human life had become. To the shock of all present, the unconnected phone worked.

Albright’s pitch-perfect eye for comic physicality presented itself throughout the piece, with just the right amount of slapstick to ease the viewer into the play’s shadowed world. The trio’s raucously funny interactions with Ruthie, played by Coleen Keene, who was on the other end of the line, really shouldn’t have paired well with an encroaching sense of dystopia – but they very much did.

In fact, “The Rotary Phone” joined all of the night’s plays in leveling misery, some of it dystopian, and some of it personal, with a keen and abiding sense of humor.

Following it was “Top Shelf Tolstoy”, directed by Lili Abel-Suarez, in which a would-be library patron — played by Vi Grauso as understudy — walked into a bar. Or, a bar that would’ve been a library, were it not for budget cuts.

Sam Shepherd was an absolute delight as the librarian-turned-bartender; as was Grauso, in the richly satisfying cynical-to-sincere transition that’s now become all but cliché when a character takes up an offer for a drink.

Abel-Suarez landed the play’s jokes perfectly, but it took an extra discerning look from her to let us simmer in the quiet tragedy it speaks to. The underfunded arts are a dystopian bleakness that needn’t wait for the future to arrive. The leap from library to for-profit operation isn’t all that absurd, despite how funny it may be on stage.

By inviting us first to laugh at the situation, Abel-Suarez gained our rapport, which she was then able to use to convey a deep sense of loss. The specifics are plenty amusing, but the rest is very real: people in a hard place need good stories to survive, and they can’t have them when society starves art infrastructure like libraries and community theaters.

Society provided another somewhat-clumsily hit target in the night’s largest-cast play, “Be Yourself,” under the direction of Jayton Newbury. The play wove together vignettes of various young characters as everything from guilt after the death of a parent, to coming out as gay in a hostile family, got a sympathetic and sincerely-acted treatment on the Redfield stage.

“Be Yourself” saw an unfettered earnest approach, a complex use of space and genuinely committed performances make the best of a script that felt a little heavy-handed at times.

Despite social critique that only extended so far beyond the characters’ own minds, Newbury’s direction made the most of a surplus of strong players. Especially for such blunt and one-note devices as Big Pharma – played by Maya Wolery – who was precisely the right degree of funny, chilling and surprisingly human all at once.

Following intermission, the showcase’s last two plays, “The Murmuration” and “The Siren Song of Stephen Jay Gould”, rounded out the evening with impressive two-person casts and significant accomplishments in depth for about fifteen minutes apiece.

“The Murmuration”, directed by Alyssa von Eberstein, dipped again into dystopia’s grab bag with an avian post-apocalypse. Sophie Hoffman and Will Ney tackled the two leads with honed realism, grit and broken humor in a grounded scene of impending oblivion that felt like it could’ve happened the next day.

In “The Siren Song of Stephen Jay Gould”, director Jasmine Johnson brought the night to a hilarious, despairing and hopeful conclusion with a man who fails to commit suicide, played by Jayton Newbury and his unforeseen spectator, played by Alyssa Granger. The play’s comic treasure was in Granger, who dialed the character up to such a boldly funny extreme that the script’s heart was able to sneak into center stage while the audience was too busy laughing.

Even with limited means, the one-acts this year were an immaculate night of pure, uncut theater.

To support the university’s Department of Theater and Dance, they are accepting donations to keep them afloat through retirements and departures.

Peregrine Hart can be reached at jaedynyoung@sagebrush.unr.edu or on Twitter @NevadaSagebrush.