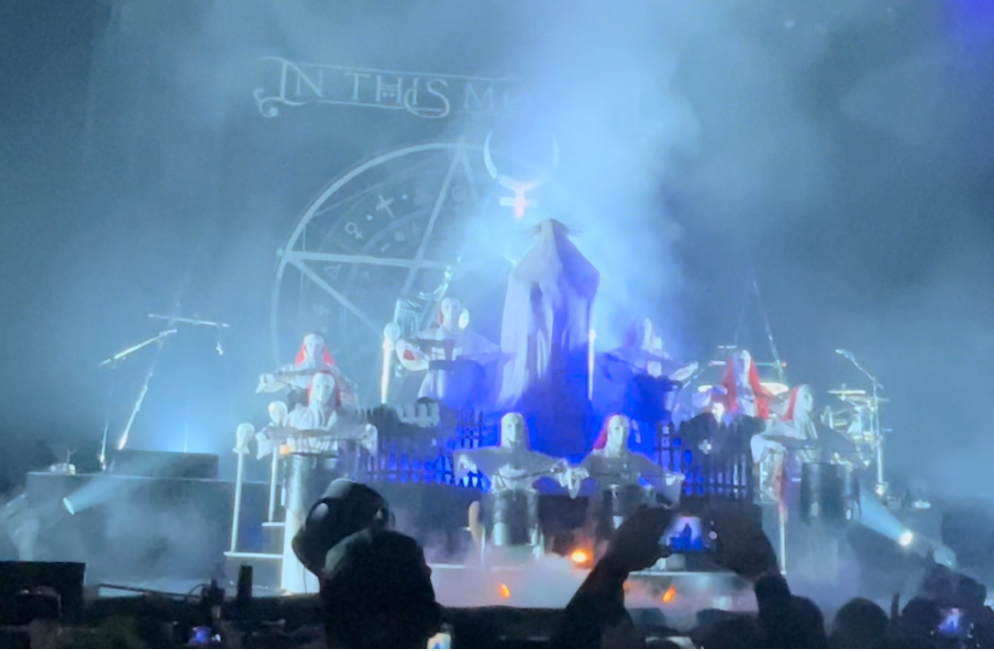 Not bad for a Wednesday night: Nothing More and In This Moment rock the stage in Reno

By Clayton GrebNovember 10, 2022No Comments

In This Moment and Nothing More rocked the Grand Sierra Resort Grand Theater stage on October 5 for the “Blood 10 Year Anniversary Tour”.

Nothing More took the stage at 8 p.m. For their first song, they performed “Turn It Up Like” – which starts off with some impressive vocal work by Jonny Hawkins that leads into the rest of the band joining in with explosive force.

Midway through the song, Nothing More unleashes their secret weapon – “The Scorpion Tail”. This machine is a 400-pound and 14-foot instrument of madness built by Daniel Oliver, the band’s bassist, out of scrap car parts and cutting edge MIDI technology. The Hawkins climbs the beast and uses it to modulate the guitar’s pitch during the ripping solo section.

Nothing More’s set was never short of energy. With Hawkins’ painted body running around the stage, the crowd seemed to follow suit with lots of jumping and head banging. The band made it a point to get the crowd involved in the songs, only adding to such a memorable experience.

They ended their set with one of their biggest songs, “This Is The Time (Ballast)”. This song again shows their impressive technical music knowledge by starting off with vocal modulation not only done with machines but also physically from Hawkins vibrating his hand across his throat.

The high energy set left the crowd eager for more, only increasing the momentum into In This Moment’s set.

In This Moment last performed in Reno less than one year ago. Since then, they turned everything up a notch: a bigger set, more back up dancers, more props, more heavy metal goodness.

They started their set off with a giant curtain up, sounds of drums and sirens warned the crowd they were about to grace the stage. The curtain slowly lifted to the sound of a piano to unveil singer Maria Brink surrounded by 8 masked drummers. The piano gave a creepy and ominous vibe that was destroyed when the band kicked into the crushing song “Burn”. The song is fueled by Maria’s voice as she belts out the lyrics.

The concert was enhanced by the large stage show. The band itself consisted of two guitar players and a drummer who  were accompanied by eight back up dancers. These dancers did contortionist movements along with Cirque du Soleil style acrobatics.

The band showed off their technical skill as well as their respect to the past of heavy metal in the middle of the show when they played a melody of songs from bands such as Slayer, Sepultura, and White Zombie. This led to an epic drum solo from Kent Diimmel. At the end of the solo the rest of the band came back together for the slow burning intro for “Big Bad Wolf.”

The show ended with a speech from singer Maria Brink before they got into the song “Wh—e”. This song has become an anthem for the band and its fans. With every lyric being sung by thousands of fans.

The show left everyone amazed — not bad for a Wednesday night.

Clayton Greb can be reached at jaedynyoung@sagebrush.unr.edu or on Twitter @NevadaSagebrush.