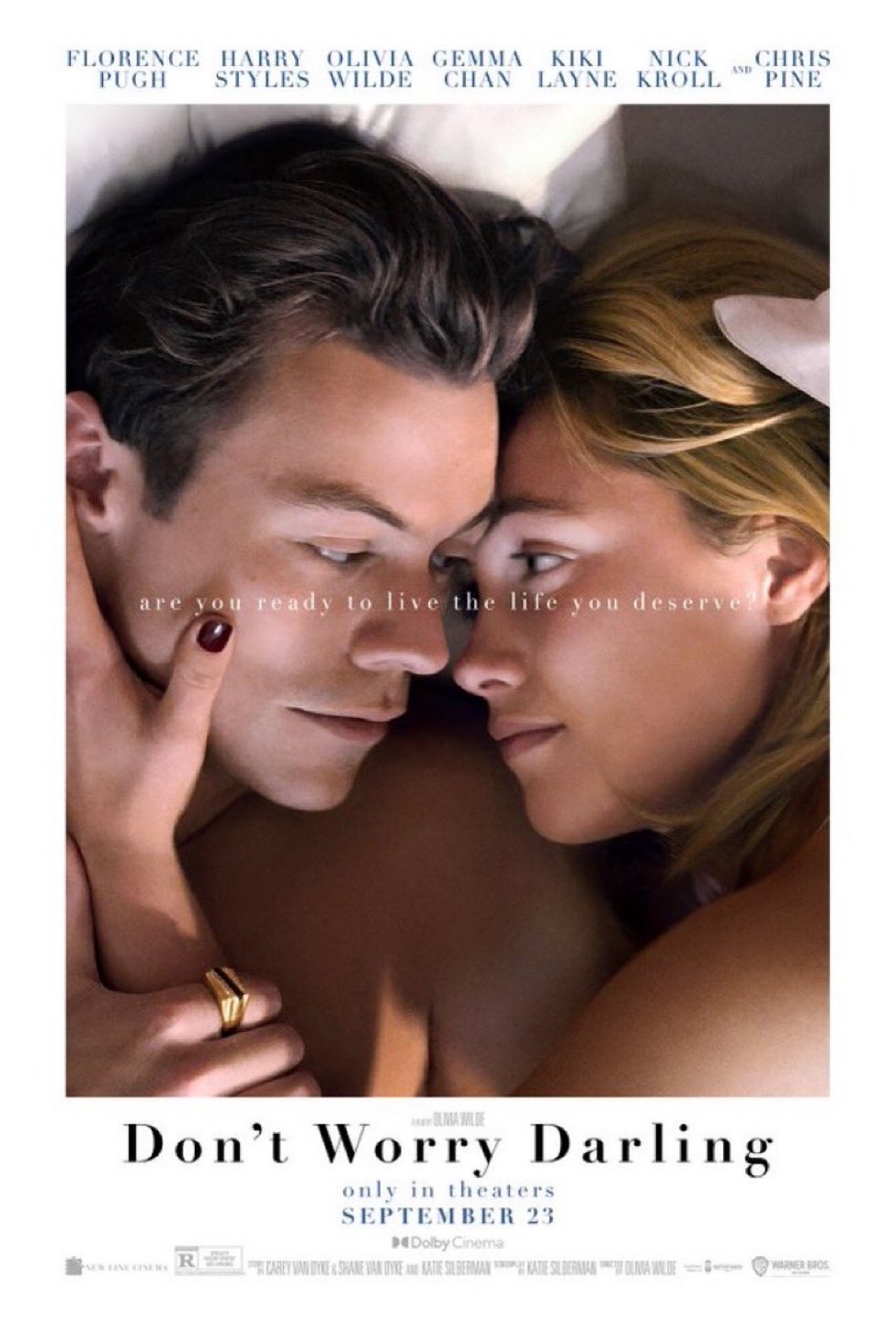 By Jaedyn YoungNovember 2, 2022No Comments

Everyone across the media has been seeing the press around the psychological thriller “Don’t Worry Darling” — and it hasn’t been positive.

First, Shia LaBeouf, who was originally cast as the main character, was fired by Olivia Wilde — the director and supporting actress — and replaced with Harry Styles, who’s not much of an actor. LaBeouf argues he quit the movie because of the schedule. Regardless of the drama, LaBeouf was not in the movie.

However, he wasn’t great. He wasn’t even good.

All the Styles fans out there will be sorely underwhelmed when they see their hero’s acting skills. They were roughly mediocre at best.

Regardless of whether or not Styles spit on Chris Pine at the premiere, Florence Pugh and Wilde actually hate each other or the whole cast ends up never speaking to each other after this, the film was still actually quite impressive on Wilde’s behalf.

What was it that made it impressive?

Fans already know Pugh is a phenomenal actress, but the way she carries this film is absolutely beyond words.

Chris Pine, Gemma Chan, Nick Kroll, Kiki Layne and Wilde all have their own special moments, but the movie does surround Pugh’s character, Alice.

Here’s the overall synopsis before we jump into the critiques.

We have a collection of couples living in this perfect little town called Victory. The main couple, Alice and Jack Chambers, live a happy and perfect life where Alice cleans all day and Jack goes off to work for the Victory Project.

All of the women stay home where they cook, clean, take ballet and manage the kids at home while their husbands go off to work. When their husbands come home, of course, all they want to do is have sex all the time.

It sounds like a traditional family home in the mid-20th century where everything seems perfect and they have the pretty white picket fences to keep up appearances at all times.

Except nothing about this little town is perfect.

It all starts with the mysterious visions that Alice experiences. Little things at first, like a simple song that gets stuck in her head and empty eggs breaking when she’s making breakfast.

Then Alice starts to notice oddities in her old friend, Margaret, played by Lane. Margaret keeps telling her something isn’t right. She said they took her son, a boy who mysteriously disappeared, to punish her.

Frank and his wife, Shelley — played by Chan — are the leaders of this mysterious society who seem to be the characters all of the other workers look up to. They idolize their relationship — it’s all very cult-like.

Alice continues to have more visions, throughout the day and in her sleep. She is suffocated by her glass wall. She wraps plastic wrap around her own head, and she finds herself lost in a world where everyone thinks she’s crazy.

When Alice watches Margaret slice her own throat and fall, all hell breaks loose.

Alice tells her husband she knows what she saw. Dr. Collins, played by Timothy Simons, comes in to check on her, but only puts more mysterious thoughts in Alice’s head when he doesn’t give her an explicit answer as to why Margaret disappeared.

When Alice tries to hide the crazy and go to a typical Victory neighborhood gala, her husband is randomly promoted and the audience gets seriously uncomfortable vibes from dear Frank, the major manipulator who charms his way through a crowd.

Alice has a panic attack, feeling like Frank is targeting her with his words and she runs out of the celebration. Her best friend throughout the movie, Bunny — played by Wilde — follows her to check on her.

Alice tells Bunny everything. She explains the visions, the disappearance of Margaret, the weird vibes Frank gives off, everything. Bunny disagrees with her the whole time, making her feel like she’s acting selfish on her husband’s big promotion day.

The flashes between Jack doing weird jazz dances on stage and this emotional moment with Alice and Bunny generates some weird vibes with this whole thing.

When Alice finally realizes no one is going to believe her, she decides to play along and pretend everything that’s happened isn’t actually happening. The only problem is no matter how much you ignore a problem, it doesn’t just go away.

When our guests of the Victory Project — minus Bunny — show up at the Chamber’s house for a nice simple dinner, we finally think Alice is back to normal, at least a little bit.

And then creepy Frank comes in to ruin it all. When Frank finally gets his moment with Alice alone in the kitchen, away from the rest of the guests, he almost chastises Alice for not trying harder.

He tells her she was the closest to revealing everything and she just gave up. What a pity, he lost someone to challenge him.

And this is where things get juicy.

Alice basically comes to the dinner table and reveals every twist and compilation of this freaky secret society. Their backgrounds are the same, people are disappearing, they can’t go beyond some mysterious border, they all learn to idealize this cult leader and their food just shows up randomly. Essentially, wake up and realize nothing is right here.

Somehow, Frank, the absolute gaslighter he is, changes everyone’s minds and reminds them that Alice is crazy and refuses medication just like Margaret did. Not to mention, he seems really turned on by the whole challenging aspect Alice brings to the table. It’s quite gross.

Shelley speaks up basically attacking Alice for being a horrible host and everyone at the table leaves.

After dinner, we expect a huge Jack versus Alice fight, but Jack concedes for some reason. He could lose his job and he’s just … fine with it?

Yeah, he’s not fine with it.

The audience finds out during their planned escape in the middle of the night, why Jack didn’t put up a fight — Jack set Alice up to be taken away.

In a devastating scene — one Styles’ acting chops couldn’t carry — we watch Jack cry and scream as he lets Alice be ripped away from his car and carried by a group of men to some unknown place.

She screams she’ll be better, she’ll listen and fall into place. But it’s too late.

Our dear Alice needed to be put back under that simulation therapy.

Turns out, Alice and Jack Chambers are actually a husband and wife, but not here. In the real world they live in a basic apartment, where Alice works late nights in a hospital and Jack sits at home unemployed. Their marriage appears to be unhappy when we get glimpses. Alice is being held down, her brain shocked trying to get rid of the memories of their actual life, but they come back to her anyways.

We watch as Jack falls down the rabbit hole of Frank’s cult and he decides to enter him and Alice into the world where they live perfect lives and Alice actually has time to show Jack affection. The only catch is it’s not a voluntary commitment for Alice.

Jack pins her down and commits her to this simulation without her having any knowledge on the subject — oops, is that the wrong thing to do?

When Alice’s brain is refried into the basic ideology of the Victory Project, everything somehow goes back to normal. Bunny seems much friendlier than usual and the whole thing still feels disturbing.

And then Alice remembers.

When Jack starts humming the song that somehow has been stuck in her head forever, she remembers her old life. She remembers them being unhappy. She remembers him kidnapping her and putting her under the pain of being brainwashed and thrown into the simulation.

When she asks Jack about it, he finally tells her the truth. She’s appalled, hurt, disgusted. But she’s also fearful of her life. When Jack tries to literally squeeze her to death, she kills him in self defense.

Bunny finds her covered in blood with a dead Jack on the floor below her.

Bunny tells her she has to get out of the simulation because this meant Jack was dead in real life. Wait, what?

And just like that, Alice feels the extent of the lies. This entire time, she has been gaslit by every single character around her.

When she escapes, the husbands of the other characters begin freaking out. The wives are confused, trying to figure out what’s going on. As the characters begin to unravel, everyone sees how easy it is for a utopia to break like glass.

The film ends with some questionable cliff hangers. Alice taps on the glass to exit the simulation, but does she make it to the real world? Shelley stabs Frank and tells him it’s “her turn”, but was she in on the project all along? The other women start to realize something is not right and their husbands panic and give away their acknowledgement of the simulation, but do they ever escape?

However, movies like this aren’t meant to be explained. When the creators leave it open-ended, allowing the viewers to decide what happens next and use their imagination to fill in the blanks, it makes the movie creepier and better somehow.

A lot of people were expecting a more explained ending, a reason as to why the society was created in the first place and an expansion of why there were certain visions in the movie and what they all meant.

Throughout this entire movie, with every new shock and plot twist, you will have your hand over your mouth, gasping in a new instant. That’s how a mind-bending film like this is supposed to make you feel.

Even though there are so many remaining questions in relation to all the unanswered loopholes in this film, it may be better for Wilde to end the story here. If she tries to uncover the nooks and crannies of things critics complain have been unfilled, she’ll only make a mess of a potential future plotline.

The goal of the thriller was to leave you uncomfortable and frustrated with the ending. That’s what it did. Pugh’s acting made sure of it.

Again, Styles’s acting could use work and there was plenty of drama that resonated behind the movie, which could potentially sway a viewer’s feelings.

However, if you go into this movie with an open-mind and little expectations of Wilde’s creativity, you will be shocked to see just how brilliant this plotline is.

Jaedyn Young can be reached at jaedynyoung@sagebrush.unr.edu or on Twitter @NevadaSagebrush.